Emissions up 4.5% in 2021 after pandemic slump, transport and heating fail targets 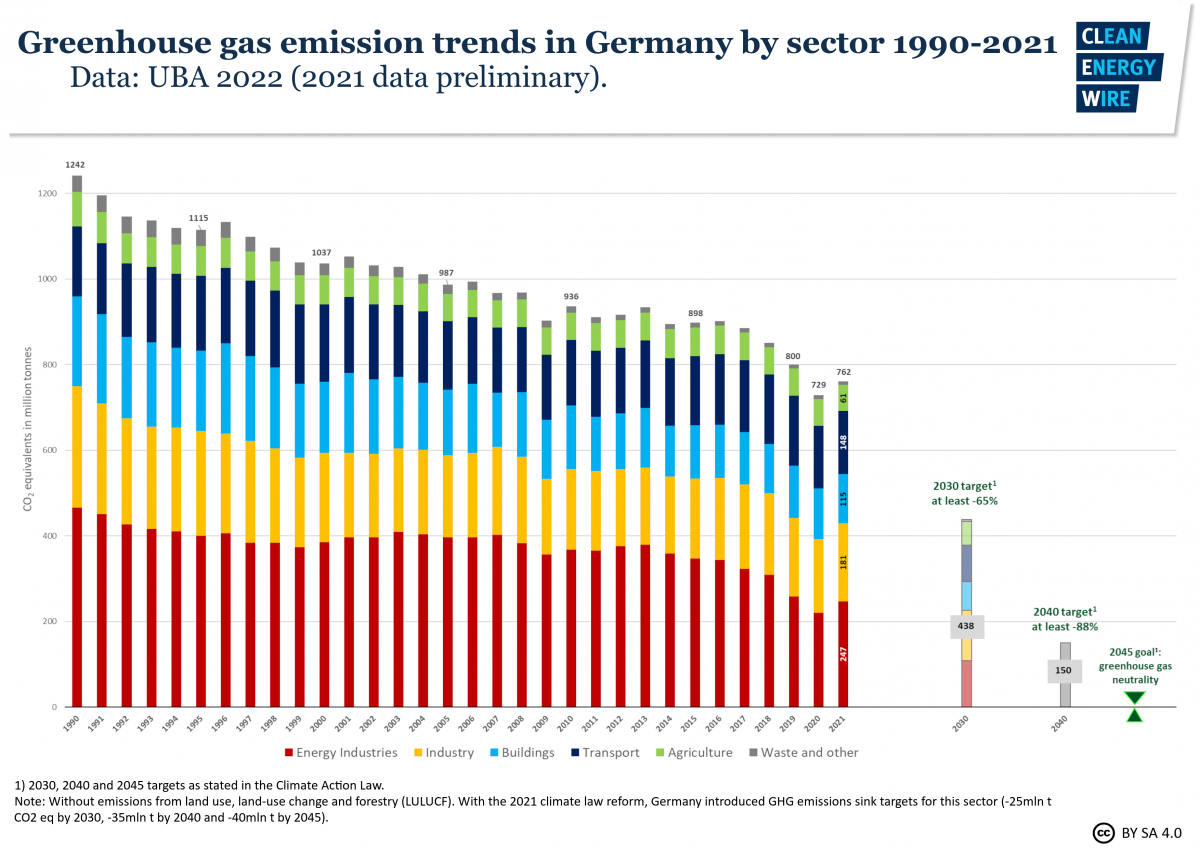 Germany’s greenhouse gas emissions have increased by nearly five percent in 2021, in an expected rebound during the economic revival after the pandemic. The country's Federal Environment Agency warned that the “Corona windfall profits” in terms of emissions reduction are being lost too quickly. The government said it wants to tackle the lack of structural changes in the buildings and transport sectors, both of which failed on their specific emission reduction targets. The economy and climate ministry said it plans to reap the double benefits of energy independence and climate action, with an emergency programme that is to triple renewable capacity expansion. Climate state secretary Patrick Graichen said he also expects a “heat pump boom” this year, as households strive to become independent from Russian fossil fuels.

Germany’s greenhouse gas emissions increased by 4.5 percent between 2020 and 2021, the Federal Environment Agency (UBA) has said in its annual report on emission trajectories. While this was to be expected in a year of economic recovery from the pandemic, high gas prices that triggered more coal burning for electricity and too little wind exacerbated the increase in emissions, the UBA and the economy and climate ministry (BMWK) said. Both the transport and the buildings (heating) sectors have failed their annual emission reduction targets, and for the buildings sector this is happening for a second time already. “These are the two sectors where pressure is the greatest for climate action precisely because it takes time to reduce emissions in these sectors,” said BMWK state secretary Patrick Graichen in Berlin. It would require structural changes to make long-lasting emission cuts happen, he said, also highlighting the synergies between achieving independence from Russian fossil fuels and reaching climate targets.

According to the UBA figures, Germany emitted 762 million tonnes of CO2 equivalent in 2021, some 33 million tonnes more than in 2020. Compared to 1990, emissions in Germany have fallen by 38.7 percent. In 2020, the drop was just under 41 percent. “Part of the corona windfall profits from 2020 have been lost again,” UBA president Dirk Messner said. Apart from the energy sector, where emissions have fallen considerably since 2010 thanks to renewables deployment, the other sectors were more or less stagnating, he stressed. “We must keep climate protection on track now and not enter into a public discourse saying that we now have more important things to do,” Messner said.

The German climate target for 2030 is an emission reduction of 65 percent. Apart from the transport and buildings sectors, all other areas have achieved their annual reduction targets.

Emergency climate programme on the way

To counter the target misses in the buildings and transport sectors, the government is currently working on a climate emergency programme that aims to triple the installation of renewable energy capacity so that 80 percent of electricity will be generated from renewables in 2030. A target-miss in sectors that fall under the Climate Action Law triggers a procedure that generally results in the ministries in charge having to present proposals on how to get the emission reductions back on track.

Energy sector: At around 27 million tonnes, the energy sector saw the largest increase in emissions in absolute terms in 2021 - 12.4 percent more than in 2020. At around 247 million tonnes of CO₂ equivalent, however, emissions were still about 11 million tonnes lower than in 2019. The main reasons for the increased use of fossil fuels for electricity generation are the significant year-on-year decrease of 17.5 TWh in electricity generation from renewables, in particular lower wind power generation, and a 13.5 TWh increase in gross electricity consumption, the UBA said.

Transport sector: Transport emitted around 148 million tonnes of CO₂ equivalent in 2021. This means that greenhouse gas emissions from this sector are both 1.2 percent above the 2020 figure and around three million metric tonnes above the annual emission level of 145 million metric tonnes of CO₂-equivalent permitted by the Climate Action Law for 2021. One reason for this is road freight traffic, which has risen again on the highways to a level slightly above that of 2019. Passenger car traffic, on the other hand, continues to be lower than before the corona pandemic (2019).

Agriculture: In the agriculture sector, greenhouse gas emissions fell by a good 1.2 million tonnes of CO₂ equivalent (down 2%) to 61 million tonnes. The sector thus remains well below the annual emission level of 68 million metric tonnes of CO₂ equivalent set for 2021 in the Climate Action Law. The decline in livestock numbers continues. Cattle numbers fell by 2.3 percent and pig numbers by 9.2 percent. As a result, there was less manure and emissions also fell (-4.0% compared to 2020). However, the significant undercutting of the set annual emission level is mainly due to methodological improvements in the calculation of emissions, the UBA said.

Waste: Emissions from the waste sector fell by around 4.3 percent year-on-year to just over eight million tonnes of CO₂ equivalent. This means that the waste sector once again remains below the annual emission level of nine million tonnes set out in the Climate Action Law. The trend is essentially determined by falling emissions from waste landfilling as a result of the ban on landfilling organic waste, the UBA said.

Graichen said that Russia’s war against Ukraine accelerates the need for climate protection in buildings and transport in particular. “Buildings must be renovated faster, electrified faster, roofs renovated and energy consumption reduced,” he said, adding that those were exactly the measures that would both “make us independent of Russian oil and gas” and reduce the CO2 footprint.

Graichen said he expected a heat pump boom this year. In addition to it already being the cheaper alternative to fossil-fuelled heating systems, “this discussion is now taking place at every dinner table - how can we make ourselves independent of Putin's oil and gas? And the result will be gas heating out, heat pump in,” he said.

In the power sector, the German government would stick with its plan of building new gas power plants. They are needed to ensure electricity supply during the coal phase-out, Graichen said. “But the question is: don’t these gas plants have to become hydrogen plants much quicker?” he said. Russian president Vladimir Putin “has broken the narrative of natural gas as a bridging technology, the bridge has collapsed. In the short term, this probably means more coal on the electricity market, and in the longer term it means green hydrogen more quickly.”

Avoiding a clear answer in the current debate on further consumer relief measures due to high transport fuel prices, Graichen said that the high diesel and petrol prices obviously posed an incentive to switch to other means of transport. More importantly, the car industry had to force the switch to e-mobility now. “The few chips that are available should be built into e-cars. Because we have a supply problem with e-cars,” he said.

Kerstin Andreae, head of energy industry group BDEW, said: “The figures once again make the urgency of renewables expansion abundantly clear. The German government must take all measures at its disposal to massively drive forward the expansion of renewables - from photovoltaic systems on private roofs to offshore wind farms.” This would require faster planning and approval procedures and more land for wind turbines. Minimum distances from residential areas, as they exist in some German states, are counterproductive, she said.

Wiebke Zimmer, deputy director of think tank Agora Verkehrswende, said: "The transport sector remains one of the big problems of climate protection in Germany. The figures are alarming, even if the target shortfall of three million tonnes of CO2 is small at first glance. In 2021, mobility was still severely restricted by corona. People were less likely to visit friends and relatives and often worked from home. Without these effects, the transport sector will miss its target much more significantly in the current year. Structurally, the transport sector is on the wrong course.”

Karsten Smid, Greenpeace climate expert, said: " While corona was Germany's most successful climate protector in 2020, CO2 emissions are again rising steeply in 2021.” Greenpeace demands that approval for new diesel and petrol vehicles in Germany must end as early as 2025. A mandatory renovation of inefficient old buildings and a ban on new gas heating systems are essential from 2024. “With an effective offensive for renewable energies and a break from dependence on Russian energy imports, Germany could even achieve its climate protection targets ahead of schedule,” Smid said.

Kerstin Haarmann, chairwoman of the Ecologic Mobility Club VCD, said: "The Ukraine war makes us aware that we not only have a climate crisis but also an energy crisis - which is also self-inflicted. The federal minister of transport must therefore now initiate effective measures that will both sustainably reduce greenhouse gas emissions from transport and reduce our thirst for energy and thus our dependence on oil.” Apart from rapidly expanding renewable energies and switching to efficient, environmentally friendly means of transport, the VCD proposes a general speed limit as a measure with immediate effect.

Ottmar Edenhofer, director of the Potsdam Institute for Climate Impact Research (PIK), said: “Coal is making a global comeback because the price of gas is rising faster than the price of coal, and not just since the Ukraine war. Only one thing will help here: a rising CO2 price.” As in the short term there would be more use of CO2-intensive coal, it is pivotal that the overall emissions cap in the EU is not weakened, he said. “If the cap remains in place, the use of more coal will not increase emissions, but the price for CO2 will rise - and that will make the necessary investments in clean energies, such as renewables and hydrogen, pay off more quickly.”

Q&A: How could Germany and the EU weather a fossil fuel embargo on Russia?