“Climate change is unfolding before us, but journalism is not telling the full story” 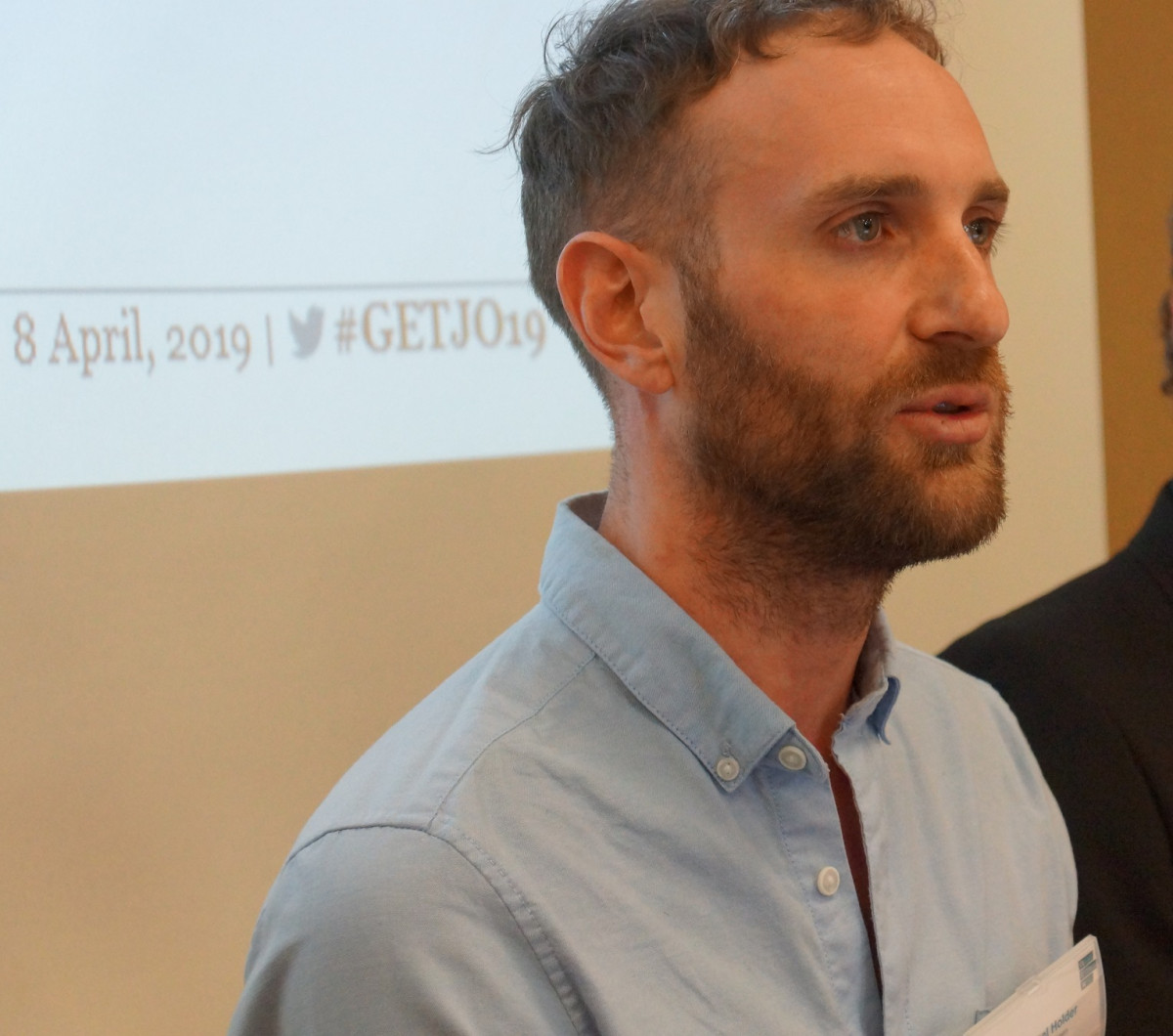 Michael Holder speaking at GETJO19. Photo: Julian Wettengel
Journalists need to be less reactive and report on the issues relevant in the future when covering climate issues and the energy transition, which could also help companies avoid failure, writes Michael Holder. He was a speaker at The Global Energy Transition Journalism Conference 2019: Business Journalism in Transition #GETJO19, where he shared his views during the 'Intercultural communication – business vs. climate and environmental journalism' workshop. This article is the fourth part of our current weekly series of blog posts on the broader themes and discussions from the conference and beyond.

Currently, the world is woefully unprepared for the political, cultural and economic changes that will take place across every aspect of people’s lives over the next 20-30 years.

That remains true whether we manage to mitigate the worst impacts of climate breakdown and transition to a low carbon economy, or stick with our current trajectory to potentially 4C of global warming by the end of the century. In either scenario, the world is on course for rapid and transformative change within a single generation.

It is a hugely difficult thing to comprehend, and a headache for journalists to cover. How on earth can we tell the story of climate change in such a way that can help us all prepare for what's coming around the corner, and therefore choose the path of minimum damage?

Fortunately, efforts are underway to find an answer. The past decade has seen a seismic shift in the type of journalists who cover climate change, environmental issues and renewable energy industries – and also the audiences who read these stories.

Business reporters at high-profile publications, or even main news teams, are now breaking stories directly related to climate change and clean technologies every day of the week.

Once largely the preserve of more niche publications or journalists focusing specifically on those topics – environment and science reporters in national newspapers, for example – business reporters at high-profile publications, or even main news teams, are now breaking stories directly related to climate change and clean technologies every day of the week.

On the one hand, this is fantastic progress. It demonstrates how today, it is near-universally accepted that the global economy has to decarbonise, and that scaling viable clean technologies is both a planetary and business imperative. Bankers, academics, businesses and environmental campaigners are all broadly singing from the same hymn sheet – and reading the same newspapers.

Yet to truly provide commensurate and informative press coverage to the greatest challenge and opportunity humans currently face, mainstream journalism – and particularly business journalism – has much, much more to do.

One of the key issues is that news journalism is nearly always reactive, telling stories about today's world while so often ignoring the more crucial questions about tomorrow's.

The UK's in-out EU referendum in 2016 is a case in point. Little press coverage at the time seemed to focus on the actual, crucial Brexit details surrounding the type of relationship the UK might have with the EU in the future. Yet three years later, UK politics is now in crisis because these very issues were not properly addressed earlier.

The stakes of not sufficiently covering the issues surrounding climate change and the low carbon transition, though, are far, far higher. And indeed, some stakes are already being lost.

US west coast energy utility Pacific Gas and Electric paid the price for its catastrophic failure to address and prepare for the risks to its business posed by climate change, which is a story that should send shockwaves to investors and consumers everywhere.

To my mind, one of the most important news stories of 2019 thus far surrounded US west coast energy utility Pacific Gas and Electric, which filed for bankruptcy, with liabilities in the tens of billions of dollars after devastating wildfires that hit California in 2017 and 2018. The company paid the price for its catastrophic failure to address and prepare for the risks to its business posed by climate change, which is a story that should send shockwaves to investors and consumers everywhere.

The very real and present dangers of climate change aren't just physical, either. They are also transitional and – crucially – social. Earlier this year, Honda announced plans to close of one of its Swindon car factories in the UK in 2022, with the loss of around 3,500 jobs. It cited the global market shift towards electric vehicles as one of the key reasons for the decision. Again, the impacts of the low carbon transition, and failures to adequately prepare for it, are happening here and now, but are only attracting attention in retrospect.

Both of the above stories were widely covered around the world, but the climate change aspects were only given cursory mentions in just some of the reports. Without climate change and the advent of clean technologies, though, it is far less likely either event would have occurred.

But to stop these adverse economic impacts from becoming more frequent, the warning alarm of climate risk needs to sound much louder – and far earlier. For one thing, that should mean business journalists having the foresight to directly address the issue of climate risk when they report on the latest multi-billion-dollar oil deal, for example. After all, every fossil fuel asset is a liability, and readers should be told.

Increasingly, smart businesses are considering these sorts of issues as part of their long-term strategic planning, but at present it seems neither the mainstream press, nor politicians for that matter, are yet doing the same.

Precisely how journalists go about asking the right questions and telling the stories that properly address the issues of tomorrow will be hugely challenging. The methods will also vary significantly depending on the precise issue at hand, and the audiences different journalists are addressing.

But in order to truly understand our rapidly changing world and guard against the worst impacts of those changes, journalists must strive to find ways of not only reacting to contemporary events, but better contextualising them within the future they signpost.

After all, the quicker firefighters reach a burning building, the more of it they might save.