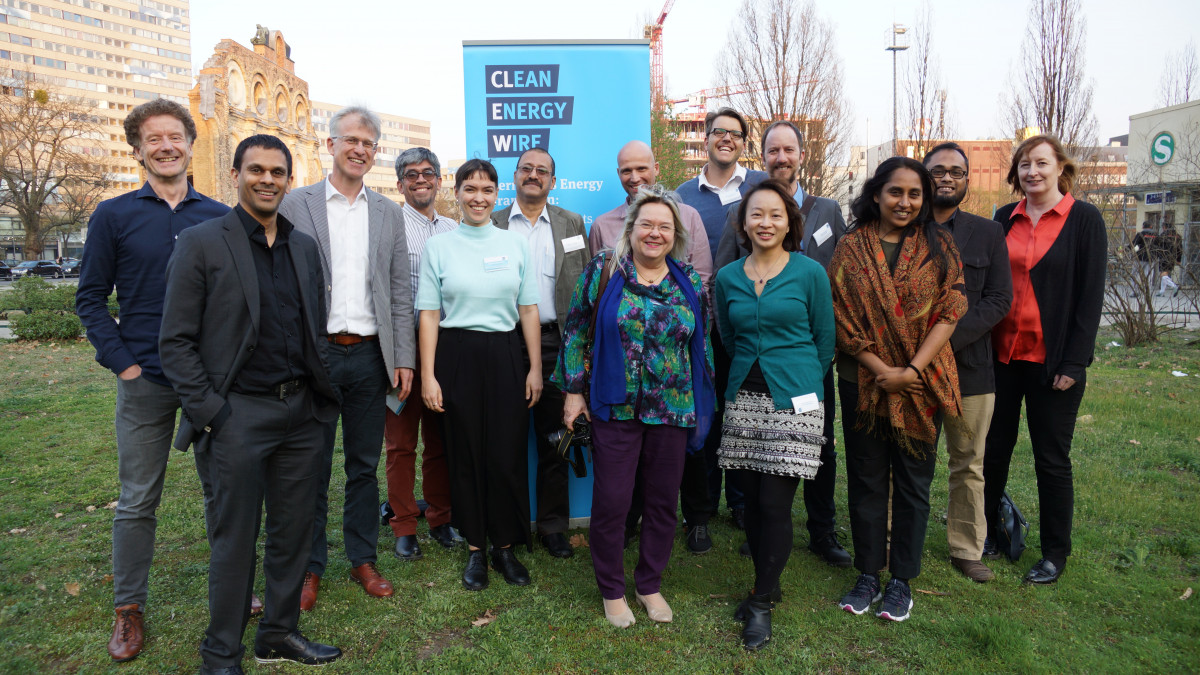 Happy faces of CLEW Ambassadors and staff at the GETJO19 conference Photo: Julian Wettengel
How does a journalist cover the energy transition when the topic is contentious and there are few examples in both the public and private sector? Kwang-yin Liu found stories in the smallest of corners of Taiwan, where she covers energy, environment, foreign relations and land issues for Commonwealth Magazine. Kwang-yin is one of 17 CLEW Ambassadors, 12 of whom took part in a pre-GETJO19 conference workshop about differing global experiences in covering the energy transition.This is the sixth part of our current weekly series of blog posts on the broader themes and discussions from the #GETJO19 conference and beyond.

As one of the few journalists covering the energy transition in Taiwan, it can be tricky finding genuine energy transition stories to tell. The move towards clean energy is often seen as merely a litmus test of one’s attitude towards nuclear power, and therefore a highly divisive topic on which few experts are willing to share their real and informed opinions.

For this very reason, top-down efforts in energy efficiency are perceived as unreliable, aligned with political interests and subject to change whenever the government faces pressure from companies and politicians.

For example, about 10 years ago, the government tried to raise prices on gas and electricity, in the hopes of curbing emissions from the energy sector. The proposal was politicised and resulted in the Premier stepping down. Also nipped in the bud was the discussion of an energy tax, mainly because of the industry’s pushback.

So, if there are no examples of an energy transition in government, what about the business community?

The trend of more Taiwan-based companies committing to sustainability is largely driven by their customers in Europe and the US, who have been introducing stricter requirements such as lower carbon footprints and the use of renewable energy. Most of these initiatives are profit-driven. The companies do it for fear of losing out in the business game.

One good example would be the pursuit to be recognised by alliances like the Science-Based Targets or RE100. Out of the seven firms who have made commitments to setting Science-Based Targets for emission reduction, four are manufacturers of technology hardware and equipment, which have the majority of their revenues coming from exports. The commitment makes more business sense than anything else, and its impact doesn’t really translate into motivation for the smaller businesses, especially if the latter do not have equally demanding customers.

Finding true energy transition stories often means looking at the smaller initiatives taken by local communities or much smaller businesses that are not driven primarily by profit.

Lin Ching-ping, a pig farmer in his mid-50s, keeps around 3000 pigs in central Taiwan. For over two years, he has partnered with academic researchers to set up pilot projects of micro biogas power plants that can solve the pollution issue and at the same time provide carbon neutral electricity at his farms. As of now, he is not profiting from the biogas plant, but he expects the projects could inspire more nearby farmers to participate in environmentally friendly programs.

Another example is a small start-up called Airtree, a tiny team made up of engineers and chemists. Their aim is to build a new agricultural system that could minimise the use of water, electricity and land. According to one engineer, this system also helps plants endure higher temperatures, which would be very valuable in the face of global warming. They are now building their first pilot farm to prove the concept.

So while I might not be covering large government energy transition stories, I have found it important to report on the often-ignored corners of micro businesses, start-ups or local communities.

Efforts, no matter how tiny, should be able to make an impact. It seems only apt to cite a quote from Dalai Lama: “If you think you are too small to make an impact, try sleeping with a mosquito.”