The Reporter's Guide 2020: One year, a climate package, coal exit and a corona crisis later 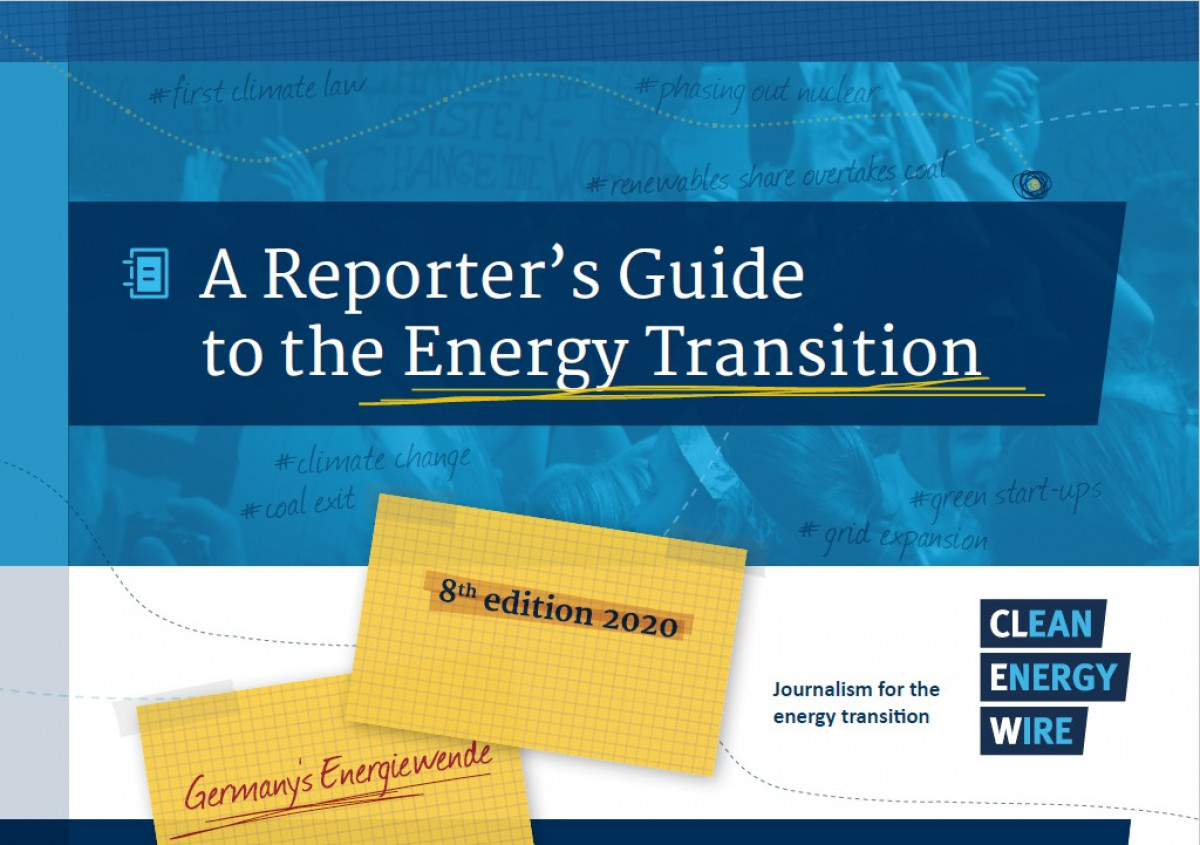 A climate package, a coal exit and a corona crisis – CLEW's shortcut to the German energy transition in 2020 includes all of the above. As the consequences of the latter influence not only climate and energy policy, our yearly guide has gone digital only. Dive in here for an overview of the key stories, facts and experts of the Energiewende.

CLEW's ‘A Reporter's Guide to the Energy Transition, 8th edition’ gives journalists an overview of the key stories, facts and experts on Germany's Energiewende – the country's planned transition into a greenhouse gas-neutral, nuclear-free economy.

The guide serves as a shortcut to the main storylines of German energy and climate policy today and as a starting point outside of our website with links to dig deeper into everything from renewable energy to power grids, green finance, decarbonising industry, and transport.

Usually, we hand out the guide during our journalist research tours, our workshops or at conferences, ready for colleagues to flick through and pick the story lead or contact right on the spot. But as the coronavirus has forced all of us into lockdown and made in-person events and meetings unlikely for quite a while, we put it up as a PDF-version only. So it’s ready for print while we all #stayhome – and as an added bonus you can click through straight to all the resources.

Since we published our last Reporter's Guide around a year ago, CLEW's correspondents have experienced the newsroom inbox overflowing, as the Fridays for Future movement reached the streets of many German cities, climate change concerns topped public opinion polls and climate policy became a centre piece of politics and policymaking in Germany.

The government presented its climate package last September, forming the bedrock of future climate policy, including a national carbon price in the transport and building sectors. Europe's largest economy decided to end coal-fired power production by 2038. Although hesitantly - Germany has signed on to becoming greenhouse gas neutral by 2050 along with the rest of the European Union – not to mention the bloc's Green Deal. Meanwhile, a slump in the expansion of renewable energy sources threatens Germany's planned shift away from fossil fuels.

In short, it's been a busy end-of-2019 and start-to-2020 for any journalist covering German energy and climate policy. While finalising the Reporter's Guide in March, we were still grappling with how to convey new climate targets laid out in the country's first climate law, and what will happen to targets set in the past. Just as the last typos were being weeded out of the guide in layout, Germany recorded its steepest emissions drop since the deep recession in 2009.

Consequences of the corona crisis

And then the corona crisis hit home. Before setting out on the yearly update of our Reporter's Guide, CLEW's newsroom discussed whether it was time to rethink its concept and come up with something new, but we decided to give it another year.

As it turned out, not only our ‘Reporter's Guide to the Energy Transition’ will likely look different a year from now; the whole world will have changed in a profound way.

The impacts of the coronavirus are felt in nearly all parts and areas of the world. Climate and energy policy are no exception. Already, Germany's proud car industry has been hit hard by temporary production shutdowns, electricity demand has fallen as the virus will likely cause a massive reduction in Germany's industrial output, and greenhouse gas emissions are expected to plunge even deeper in 2020. The EU's Green Deal has been put to the test and calls for a green economic stimulus have begun.

We have added these wide-reaching changes to our ‘Reporter's Guide to the Energy Transition’ at the last minute knowing well that its storylines will probably change at a higher speed than we would have imagined just two months ago.

As a consequence, CLEW's Reporter's Guide will only be published digitally until further notice, unless, of course, you simply cannot wait to hold it in your hands and PIY - print it yourself.

You can download it here. It’s still suitable as bedtime reading, a quarantine pastime or hardcore background research for the green economic stimulus strategies you will be covering for the coming months.