Factsheet
On 3 December, the cabinet is to approve a new Climate Action Programme with measures to reduce the country’s CO2 emissions. But why is the government presenting the plan now?

Germany has historically been known for taking the lead on climate change. But despite ramping up renewables in an effort to transform the energy supply (Energiewende), the country looks set to miss its 2020 climate targets if more is not done to reduce carbon emissions.

Following the EU’s agreement on new climate targets and just weeks before of the next UN climate summit in Lima, the government is doing its homework on how to achieve its 2020 CO2 emission reduction targets. With the action plan agreed, Environment Minister Barbara Hendricks would be able to head to Peru with not just pledges to show, but concrete measures to achieve them.

The Climate Action Programme (CAP) is also being presented now because additional measures are needed to meet targets, since Germany’s greenhouse gas emissions have risen over the last four years. With only current policies in place – including further development of renewables and combined heat and power generation, the European Emissions Trading Scheme (EU ETS) and boosting energy efficiency – Germany would fall short of a 40 percent reduction in CO2 emissions (compared to 1990) by at least 7 percentage points or 87 million tons. This is referred to as the “climate gap”.

The issue with coal

An increase in electricity generation from coal since 2009 has meant rising greenhouse gas emissions and put Germany on track to miss its CO2 reduction targets. The energy sector – electricity generation from fossil fuel – is responsible for the largest share of emissions (40 percent – see Figure 1) and shows the “greatest economic and technological potential for lowering emissions”, according to a draft of the Climate Action Programme. Several studies have calculated that between 50 and 60 million tons of the missing 87 million have to be saved by the electricity sector. 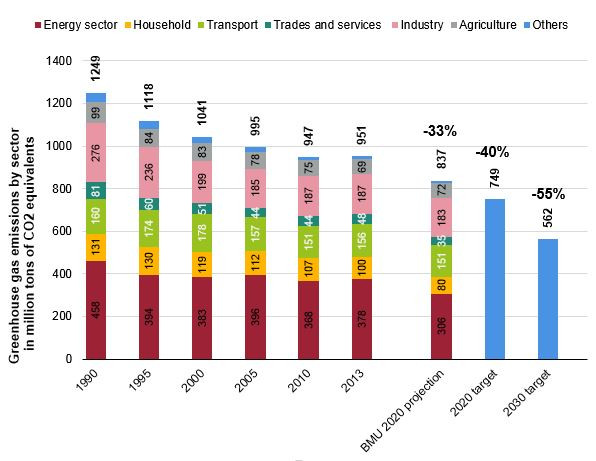 In October, information leaked from the Ministry of Energy and Economic Affairs suggested that some 10 gigawatts of coal capacity could be shut down in order to meet climate protection targets. Several studies showed that less coal in the electricity generation mix – or the retirement of 4 to 7 gigawatts of lignite and hard-coal capacity –  would go most of the way to closing the climate gap (saving 50 to 60 million tons CO2).

However, by mid-November, energy minister Sigmar Gabriel – after considerable pressure from trade unions and utilities –  made it very clear that a quick phase-out of coal was not on the agenda as this would alienate industry and endanger jobs in Germany.

What the Climate Action Programme says – so far

The CAP will detail the share of carbon emissions produced by each sector and possible measures to reduce emissions from each, adding up to a cut of 87 million tons. However, the draft programme does not fully specify the scale of carbon emissions reduction expected from the various measures, or how much they might cost. Because the investment required for measures such as introducing more LED lighting (saving an estimated 0.01 million tons) or the protection of marshland (saving up to 3.4 million tons) is not given, it is unclear whether they offer value for money.

For the power sector in particular – the largest contributor to overall CO2 emissions – there are no concrete numbers on the potential for CO2 reduction. The conventional power plant fleet shall be “low-emission, efficient, very flexible and only operate for relatively few hours”, the draft plan reads, but does not say whether or not this involves a phase-out of old coal-fired stations.

A further measure aimed at the energy sector will see Germany push for timely reform of the EU emissions trading scheme (ETS), in the form of a market stability reserve to be introduced in 2017, and a direct transfer of “backloaded” allowances into the reserve. This would push up the price of allowances and encourage market players to invest in efficiency measures to prepare for the rising cost of emitting CO2. Again, the the potential impact of these reforms on emissions is not detailed, as much depends on the final decision of the EU member states.

The biggest share of potential CO2 reductions specified – 25 to 30 million tons – comes from energy efficiency measures detailed in the National Action Plan for Energy Efficiency (Nationaler Aktionsplan Energieeffizienz, NAPE). Much of this is to be implemented through energy-saving renovation to buildings – which currently account for 40 percent of the country’s final energy consumption – funded through tax breaks and loans made available through the KfW development bank. 500 energy efficiency networks of between eight and 15 businesses with collective energy efficiency targets will be established.

A competitive tendering system is to be introduced to implement energy saving projects, with funds of 15 million euros made available in 2015, and growing each year, with 150 million euros being put in annually from 2018 to 2020.

Carbon emissions from the transport sector could be cut by an additional 10 million tons, the Climate Action Programme calculates, detailing a range of measures and their potential contribution (see table below). They include further expansion of the heavy vehicles toll, increased use of electric vehicles (1 million by 2020), climate-friendly public transport and more freight transportation by rail.

Trade, agriculture and others

10-18 million tons of CO2 could be saved in the agriculture and waste sectors, again with many small measures such as a new fertiliser law, better recycling, reformed tilling of grasslands and protection of swamps and marshes (see table below). 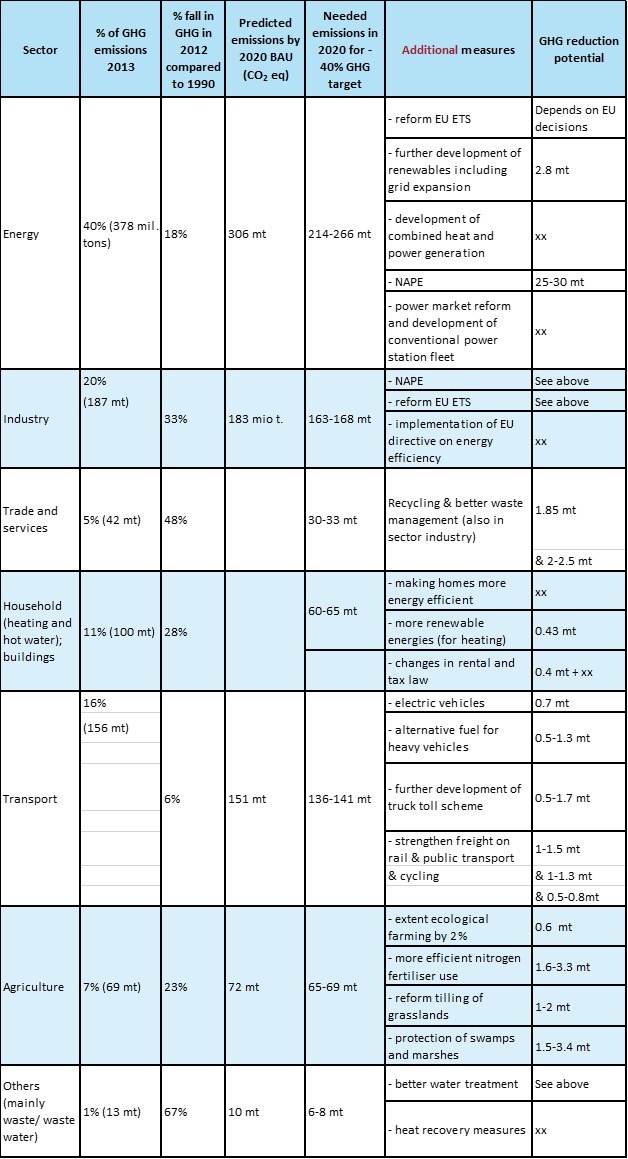 The leaked draft of the Climate Action Programme was targeted with criticism and mockery for not giving concrete numbers on emission reductions from the energy sector and for only planning “further development of the fossil fuel power station fleet”.

Some said the plan is overly optimistic about would it could achieve.  “These measures are not enough to achieve the climate protection targets,” the opposition Green party’s Oliver Krischer told Der Spiegel. “We need a climate protection law with a binding commitment to the national climate targets underpinned by concrete measures.”

Environment minister Barbara Hendricks whose ministry penned the programme admitted that “intensive talks” between the ministries involved would be needed before the plan is finalised – the cabinet is set to decide on it on 3 December.

The newspaper taz and Friends of the Earth Germany noted that controversial measures such as commuter tax breaks and company car tax privileges are not touched on in the draft plan. And it was criticised for calculating an additional 0.7 million tons CO2 eq reduction as a result of one million electric vehicles coming on to the road by 2020 – a scenario many thought unlikely.

Greenpeace said that depending on reform of the EU ETS to achieve Germany's climate targets was dangerous, seeing as the decisions on the scheme dating from the 24 - 25 October would not produce the necessary rise in allowance prices before 2020.