Factsheet
[Update: We have added an overview chart from the progress report to this factsheet, 05 Dec 2014] In its 2014 first progress report on the Energiewende, the German government has established what it calls political goals for its energy transition. They now give equal footing to competitiveness and energy security along with the goals of cutting emissions and exiting nuclear energy.

Every three years, the Federal Ministry for Economy and Energy compiles and analyses data on the project in areas from renewables to energy efficiency, energy prices, the transport sector, CO2 emissions and the power system. The report evaluates the status quo of and outlines the next steps in its Energiewende, the transition to a low-carbon economy.

For the first time, the government specifically sets forth four political goals, meant to guide its implementation of the energy transition. These are: Climate goals – reducing CO2 emissions - the nuclear energy exit, Germany’s economic competitiveness, and safeguarding the energy supply.

The Energiewende must make economic sense, the government says, in order to maintain popular support and to strengthen Germany’s competitiveness. At the same time, it says that a reliable energy supply is imperative for an industrialized country like Germany, noting that the shift to renewables poses challenges. The report also names two strategic “core goals”: increasing the share of renewable energy in overall energy usage and cutting primary energy usage while raising efficiency.

The report stresses that a fundamental decision is now due on the future design of the power market. In addition, a speedier extension of the grid was indispensable for a success of the Energiewende.

The report also says that the government must ensure that the parts of the power prices which are determined by the state don’t rise any further. The slight fall in the surcharge for renewable energies for 2015 shows that dynamics of rising prices of the past years has been stopped, the report says.

An independent commission of experts evaluated the report, criticising that only two of the goals – the climate target of 40 percent by 2020 and the nuclear exit by 2022 – had been quantified. Numeric indicators for the other political goals – energy security and competitiveness - had not been established, although the commission had previously recommended doing so. If these goals are not assessed transparently, “an implicit revision of the climate target goals and nuclear energy exit could result,” it warned.

Looking ahead, the government’s report says Germany needs to work harder to cut primary energy usage. The progress report predicts that based on data from the last three years, Germany is likely to miss its goal of cutting primary usage by 20 percent by 2020 over 2008. Unless further measures are taken, the reduction will be between 7.2 and 10.1 percent. A National Action Plan for Energy Efficiency (NAPE), also published Wednesday, should help reach the target, it said.

Turning to its climate goals, the government said that in order to close the 5-8 percentage-point gap between projected CO2 emissions and the 40% reduction target in 2020 over 1990, “all actors and sectors” must make considerable efforts. The government also released a Climate Action Programme, outlining such measures.

The four commission members, from various universities and energy research institutes, said that while the progress report outlines “considerable potential for cutting emissions in all sectors,” and even names possible areas for taking action, it fails to make suggestions for “concrete measures and their contribution to the goals.” 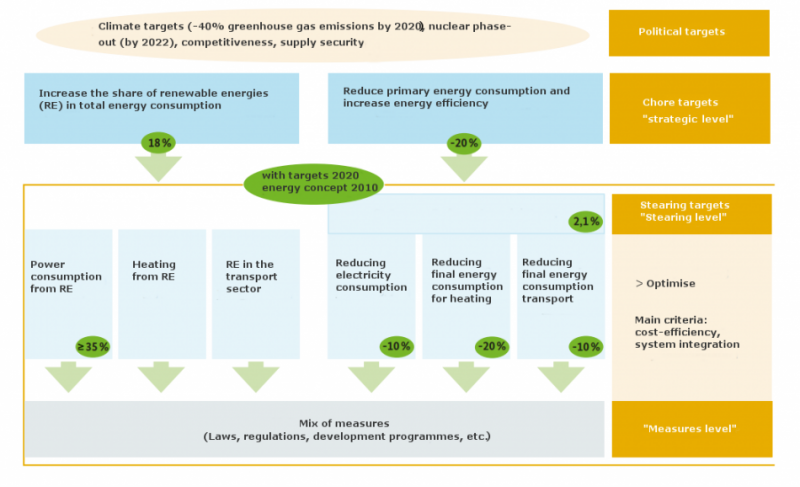