Factsheet
Decommissioning, storing, transporting and re-storing: Ridding Germany of its nuclear heritage comes with a hefty price tag. Some of the costs will be covered by the state but utilities are liable for most of the clean-up.

How much will it cost and who pays?

The costs of the nuclear phase-out are commonly divided into expenses for decommissioning, i.e. dismantling the nuclear power plants (NPP); and waste disposal, i.e. the temporary and permanent storage of radioactive material. Storage costs include the search for a final repository, the building, operating and loading of the facility, the transport of the nuclear waste and finally the sealing of the repository.

The state will have to pay the decommissioning and storage costs for publicly owned research reactors and for two nuclear power stations in the former GDR (East Germany), since these plants did not find private owners after Germany’s reunification. The environment ministry estimates a bill of around 6 billion euros for these decommissioning works (excluding the costs for finding, building and operating a final repository) but says the figure is “afflicted with great uncertainties”.

The state will also pay around 5 billion euros to retrieve and re-store the unsafely-stored waste from the facility at Asse, and a further 2.4 billion euros to operate and seal the facility in Morsleben (See Factsheet on nuclear waste storage here). The construction, operation and sealing of a final repository for low and medium-level waste at Schacht Konrad will cost around 7.5 billion euros, according to the ministry.

Previous calculations put the cost of finding, building and operating a final repository for heat-generating waste at around 10 billion euros. But the ministry last month admitted that it was impossible to give exact figures as even the site of the final repository was still unknown.

The bill for building, loading and operating the repositories will be split between the state and utilities.

The environment ministry expects the cost burden to peak between 2016 and 2020 but says storage will still need financing in 2080. The head of the final repository search commission in parliament, Michael Müller, said in April that costs could rise to 50 billion or 70 billion euros over the next decades.

Utilities estimate that expenses for the post-operation period and decommissioning/dismantling works at one NPP range from 500 million to 1 billion euros, depending on its kind, size, age and run-time. RWE says costs for the decommissioning of two reactor blocks at Biblis over the next 15 years will be “considerably higher than 1 billion euros”.

In its August 2015 report on costs and financing of nuclear waste storage, the environment ministry says the utilities that own and operate the commercial power stations in Germany put the total cost of decommissioning at 34 billion euros. But utilities are likely to have to foot a much larger bill as the figure does not include any cost increases or the expense for finding and operating a final, permanent repository. 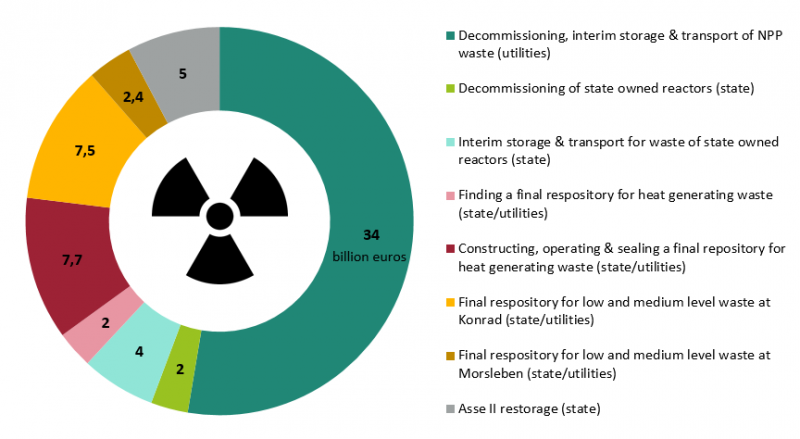 Green Budget Germany (FÖS) analysed costs for past decommissioning measures and estimated that dismantling and waste storage of 23 NPPs in Germany would cost between 26 billion and 44 billion euros. If the considerable risk of cost increases during the search and construction of a final repository are included, however, the predictions rise to between 31 billion and 67 billion euros.

In the utilities' scenario, the cost burden for the companies will be largely made up of decommissioning expenses until 2045, before financing interim storage, waste treatment and preparations for permanent storage become cost drivers. While expenses will peak between 2024 and 2028, the ministry still sees utilities paying for these undertakings in 2099 to 2103 – again, not including obligations for the final repository. 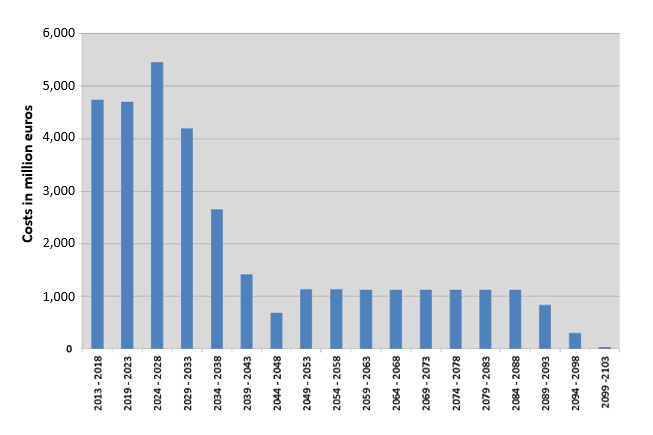