Can the UK climate movement go 'beyond politics'? 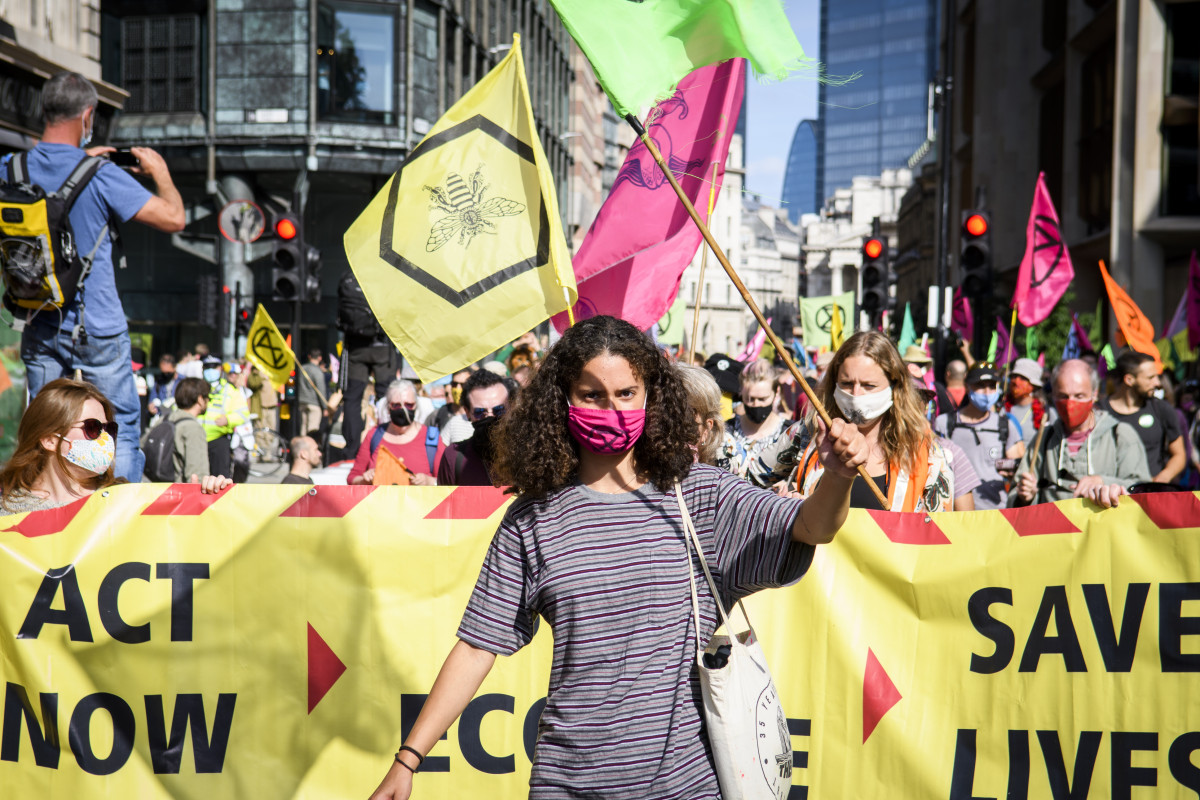 The UK is leading the world in terms of climate targets as it heads towards COP26. This is in no small part due to the work of climate activists, who, in the words of the campaigning group Extinction Rebellion, have come together to “sound the alarm” on the climate emergency. But now that the government has set climate targets, the movement is turning to the harder question of how to reach them. The government is pursuing a green capitalist approach to the transition. Many in the climate movement, however, consider this insufficient; they want to see a radical overhaul of governance and society.

“For years we fought to make climate change a cross-party issue,” says Sam Hall, director of the Conservative Environment Network, a network of conservative MPs, local representatives and activists who want to push the environment and climate agenda within their party. Now, he believes, this unity is being threatened by those in the climate movement who want to achieve wider political, social and economic change.

Questions of justice and equality have been gaining focus in the mainstream climate movement in the UK, especially since the Black Lives Matter and trans rights protests in the summer of 2020 Many in the movement are drawing attention to disparities in the way climate change is impacting people depending on their social background, such as race, ethnicity, gender or disability.

In the words of UK climate justice activist Ashish Ghadiali: “You don’t solve this crisis by creating a new apocalypse: green capitalist solutions will not bring the colonialism and extractivism of the last 400 years to an end; it will merely replace the mining of coal with the mining of precious metals needed to manufacture batteries for the new green economy. What’s needed is a much deeper transformation.”

“When activists talk about system change it risks alienating people who just want to get emissions down.”

Left-wing UK politician David Lammy says, “There is no climate justice without racial justice,” but many in government maintain that resolving climate change is primarily about transitioning to an electric energy system. Sam Hall argues that, while social justice is important, achieving a full-scale economic, social and political transformation is not realistic in the time available -- and, in his view, not desirable. “A transition from dirty to clean energy will be a significant step,” he says. “And a market-based system is the quickest way to get us there.”

Eamonn Ives from the conservative think tank Centre for Policy Studies adds, “When activists talk about system change it risks alienating people who just want to get emissions down.” When it comes to communication, he says that climate fairness could be a more effective frame than climate justice to appeal to conservative voters who associate justice with “human rights legislation gone too far”.

This dispute is not unique to the UK. As recently reported by Clean Energy Wire, Germany’s climate movement is experiencing similar tensions, with Fridays for Future joining forces with trade unions and anti-racist groups, while the conservative KlimaUnion concentrates on market-based solutions. In the UK, one group – Extinction Rebellion – has worked hard to bring unity to the movement by advocating a campaigning approach that goes “beyond politics”. Yet, having achieved huge success in the beginning, their attempts to bring people together are faltering.

By the end of April 2019, London’s police force had arrested over a thousand climate activists following a series of large-scale occupations and actions aimed at shutting down the capital. A few weeks later, the government under conservative prime minister Teresa May declared a climate emergency, the first such declaration of its kind in the world. In June, the UK set another record by pledging to reach net zero emissions by 2050.

This turning point for public and political consciousness regarding the climate emergency was heavily precipitated by the work of campaign group Extinction Rebellion. Formed just the year before, Extinction Rebellion or XR mobilised thousands of people, building on the energy of the Friday school strikes, and seizing the headlines through acts of civil disobedience.

Despite its effectiveness in raising awareness, however, XR quickly came in for criticism from some of its allies in the climate movement. At the beginning of May 2019, a collective called Wretched of the Earth published an open letter addressed to XR. The letter called attention to the colonial and capitalist roots of the climate crisis and argued that the experiences and insights of those already affected should be much more integrated within the climate movement’s work: “In order to envision a future in which we will all be liberated from the root causes of the climate crisis – capitalism, extractivism, racism, sexism, classism, ableism and other systems of oppression –  the climate movement must reflect the complex realities of everyone’s lives in their narrative.” The letter called on XR to do more to show that climate change is not a future phenomenon but one that is already destroying lives.

It also questioned the XR’s tactic of mass arrest. The idea behind the arrest tactic was to overwhelm the police and courts and use the judicial system as a means of amplifying the climate message (currently close to 1000 cases are awaiting trial). Yet many people, especially marginalised and vulnerable groups, said they felt uncomfortable being arrested and were concerned about the consequences. The arrest tactic gave XR the reputation of being white and privileged, as did the chant of some activists at XR’s early demonstrations: “we love you police”.

Another XR action in October 2019 prompted criticism: a few XR activists clambered onto an underground train in Canning Town, a working class, racially diverse area of East London, at morning rush hour, bringing the tube line to a standstill. The incident was widely condemned. XR had relatively high approval ratings beforehand (36% of the sample surveyed by YouGov supported XR), but afterwards, 60% of the UK population said they sympathised more with the delayed commuters than the activists who stopped the train.

According to these critics, XR has failed to unify people around the climate question and transcend the political divide over just how to. But is this really so surprising? How we transition to net zero is an unavoidably political question. Paul Routledge, an activist and researcher of social movements at Leeds University, argues that trying to remain “beyond politics” signals an ignorance of how change happens. In a recent article, he advocates the need for “grassroots mobilisation in collaboration with state action” and points to the German Energiewende as a good example of a grassroots initiatives using energy, creativity and resistance to drive change at state level. In the 10 years available to make changes, he says, government needs pressure from all angles to achieve a “different, more democratic state that can better address climate justice issues.”

“The state isn’t a perfect instrument, but we need a political body of the size of the state to make the changes that are needed.”

But if the climate movement is to work within electoral politics, where is its home? Despite its opposition to the Conservative government, the climate justice movement is not unified behind Labour, the party on the left of UK politics. Many of the activists interviewed for this article want to see the end of market capitalism, but there is less shared ground over the role of the state: some want to get rid of it completely and others want to increase its power.Chris Saltmarsh is a climate justice campaigner who, for the last 5 years, has been an active member of the Labour Party. Saltmarsh has made efforts to develop the traditionally strained relationships between the trade unions and the climate movement. He is frustrated by the climate movement’s lack of engagement with the electoral system. “The climate movement is a global movement, but it needs to be a mass movement,” argues Saltmarsh. “The state isn’t a perfect instrument, but we need a political body of the size of the state to make the changes that are needed.”

The changes he wants to see are detailed in the Labour Green New Deal, drafted in the run-up to the last UK general election back in December 2019 when Labour was led by its most radically left-wing leader in decades, Jeremy Corbyn. Labour’s Green New Deal sets 2030 as the net zero target date, maps out a green industrial strategy including job creation and lifetime retraining programmes, and advocates for public ownership of the energy system and of the bus network. It is one of the most radical plans in Europe but it’s now on the back burner.

Following the Conservative party’s landslide victory in 2020, Labour is now led by the more moderate Keir Starmer, and it is reviewing its policy framework on climate change. Sam Mason, the climate and sustainability policy officer at one of the UK’s public services trade unions says she’s concerned that Labour has dropped the ambition of its 2019 Green New Deal. Saltmarsh remains hopeful that Labour can still offer leadership on climate justice and is looking forward to the Labour Conference in September where he plans to push ambitious plans for a “green jobs revolution”. But Labour is still far from gaining power, and its ability to pursue its own climate change agenda is currently limited to places where it holds power, like London, Manchester and Liverpool and in the devolved assembly in Wales.