EU Member States must together reduce greenhouse gas (GHG) emissions by 30 percent by 2030 compared to 2005 for the transport, buildings, agriculture, waste, land-use and forestry sectors, according to a proposal by the European Commission. The Effort Sharing Regulation proposal includes binding annual GHG emissions targets for each of the member states from 2021-2030. Germany would have to reduce its emissions by 38 percent until 2030 compared to 2005. The affected sectors do not fall under the EU Emissions Trading System (EU ETS), but made up almost 60 percent of total EU emissions in 2014, according to a factsheet by the Commission. The institution’s proposal package on “Europe’s transition to a low-carbon economy” also includes a strategy on low-emission mobility and a proposal to integrate the land use sector into the EU 2030 Climate and Energy Framework. The latter contains a provision giving member states the possibility to include emission removals from land use – e.g. through forests that absorb the emissions – to balance out their emissions.
German environment minister Barbara Hendricks welcomed the Commission’s plan in a press release and said that Germany’s existing national targets were already “a bit more ambitious” than the proposed 38 percent reduction of GHG emissions. Hendricks also said that she would support only a “cautious application” of exceptional regulations like using forest absorption to balance out emissions.
The World Wildlife Fund (WWF) claimed that the proposal meant that agreements from last year’s Paris climate summit were “not reflected in the concrete EU climate policy”, according to a press release. “Not only is the target too weak, but the new plan is also riddled by loopholes,” said Juliette de Grandpré, EU climate and energy policy expert at WWF Germany. In a separate press release, the non-profit environmental and consumer protection association Deutsche Umwelthilfe (DUH) writes that exceptional rules like the “forest-loans” would have “fatal consequences for the effectiveness of the instruments”.

Read the press release and find the corresponding material in English here.

Find the German press releases by the environment ministry here, by WWF here and by DUH here.

The EU Commission missed its opportunity to introduce more ambitious climate targets with its proposal package for a low-carbon economy, writes Joachim Wille in an opinion piece in Frankfurter Rundschau. “The EU Commission pretends […] that ‘Paris’ never happened,” writes Wille and adds that there was little hope for more ambitious targets resulting from the subsequent legislative process.

Ministry for Economic Affairs and Energy

Denmark and Germany have agreed on two separate but mutually opened PV auctions to be held in 2016, the Ministry for Economic Affairs and Energy (BMWi) has said. Denmark will partially open one auction round with a capacity of 20 megawatt (MW) to bids for ground-mounted solar PV projects from Germany. Germany will in return open a 50 MW round to installations located in Denmark. The cross-border pilot will be the first time that European two countries have cooperated in auctioning support for renewables. The agreement is based on the principle of reciprocity and the ability of physical electricity exchange between the countries.

Read the ministry press release and download the agreement in English here.

Swedish utility Vattenfall, which operates many conventional power plants in Germany and is selling its German lignite operations to Czech investor EPH, has published its half-year 2016 figures. It says that challenging market conditions forced it to make “significant impairments”. Out of 30 billion SEK (ca. 3 billion euros) impairments, 21 billion SEK (ca. 2.2 billion euros) were “attributable to Vattenfall’s lignite operations” in Germany, the company said, adding that the negative effects would have been even greater if Vattenfall had held on to the operations. Nevertheless, “Germany continues to be one of Vattenfall’s most important markets, with operations in all core business areas”, CEO Magnus Hall said.

Read a CLEW article on the sale of Vattenfall’s German lignite operations to Czech investor EPH.

The American Council for an Energy-Efficient Economy (ACEEE) has published its 2016 International Energy Efficiency Scorecard. Germany is ranked as the world leader in energy efficiency, followed by Italy, Japan, France and the UK. The US came 8th. The 23 countries in the ranking represent 75 percent of all energy consumed, an ACEEE press release states. The organisation evaluated each country for 35 different energy efficiency indicators in four different categories. Germany scored highest in the categories of national efforts, buildings and industry, but was overtaken by India, Italy and Japan in the transport category. 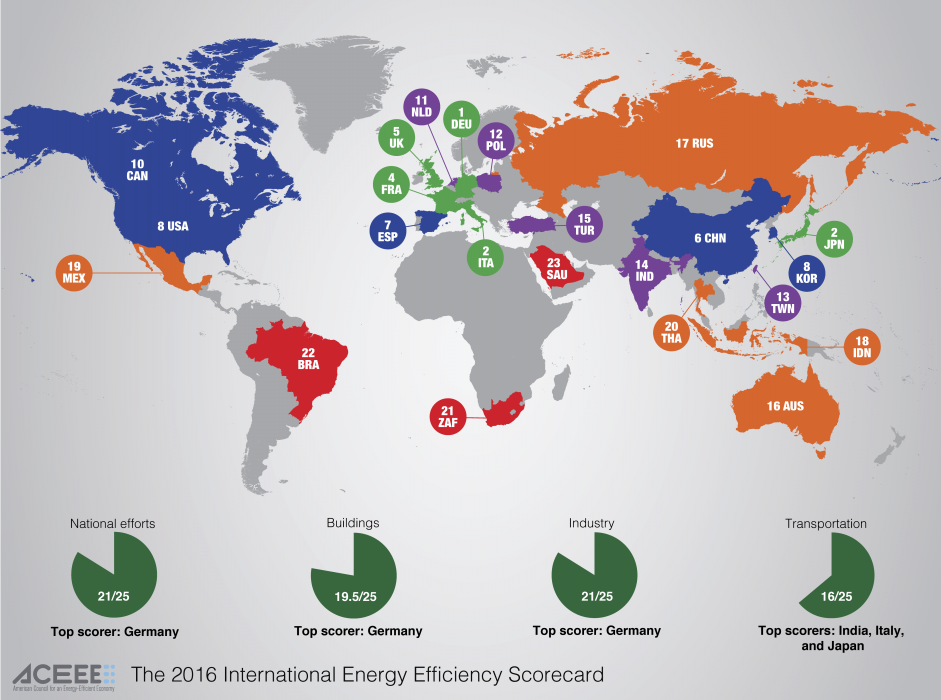 The resolute application of a ban on diesel vehicles in big cities would upset economic activity as trucks, delivery vans and buses for public transport would be prohibited as well, writes Holger Appel in an opinion piece in Frankfurter Allgemeine Zeitung. Appel calls for alternatives: “City buses with fuel cells, taxis with hybrid drive, government fleets with electric motors – those would be useful measures.”

More than half of solar PV installation operators in Germany want to use their generated power themselves once their 20-year feed-in remuneration runs out, a study by EuPD Research, seen by PV magazine has found. This development will boost the demand for power storage systems, the consultancy concluded. EuPD Research conducted the survey among 800 solar PV plant owners and project developers.

Germany could work as an example to Mexico concerning the social challenges and consequences of a transition from fossil to renewable fuels, writes Juliana Fregoso for Forbes Mexico. Mexico could learn from German Energiewende experiences that energy generation does not need to be in the hands of big business and that the integration of the population in the process is important. In light of the corruption in the country, Mexico’s government could use the energy transition as an opportunity to gain back the support of the citizens.

Read the article in Spanish here.

“Germany’s Energy Transition: The Good, the Bad and the Ugly”

Germany’s Energiewende has so far failed to turn the country away from the electricity production from hard coal and lignite, writes Emilio Godoy in an article on Inter Press Service. “The persistence of fossil fuels casts a shadow on [Germany’s] green energy matrix,” writes Godoy.