In the media: Dispute over future of coal taken to the streets 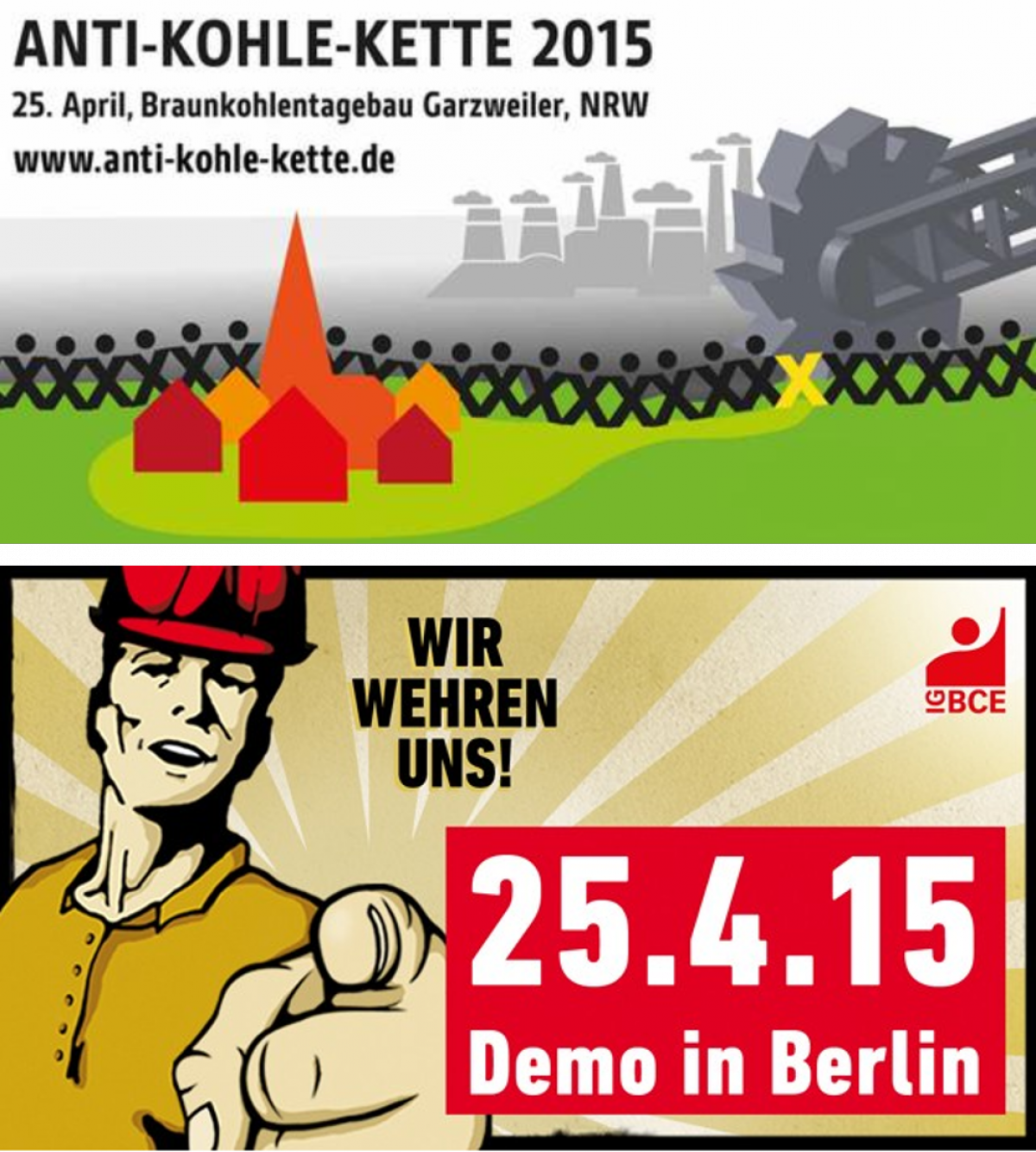 Supporters and opponents of coal gear up for mass protests

The heated debate over the future of coal in Germany will be taken to the streets next weekend, as supporters and opponents of lignite mining both call for mass protests on Saturday 25th. Coal union IG BCE, which warns the government’s proposal for a coal levy puts 100,000 jobs at risk and the “social blackout of whole regions” may follow, will stage a demonstration in Berlin. Friends of the Earth Germany (BUND) is calling for a human chain at the open-cast mine Garzweiler in the west of the country to protest against “climate killer coal” and demand an “overdue exit”.

“Does Gabriel pressure the coal sector with wrong numbers?” / “Domino with lignite”

Citing an analysis provided by trade union IG BCE, Daniel Wetzel questions whether the climate levy for old coal-fired power stations is as harmless as Economy and Energy Minister Sigmar Gabriel says. According to the Ministry, the climate levy is designed to motivate plant operators to reduce power generation and run units more economically, e.g. at times of high power prices. But the Ministry’s calculations assume a high power price in 2020, Wetzel writes in Die Welt. If the current “forward price” of 32.50 euros per megawatt-hour was used, 85-95 percent of brown coal power station units would become unprofitable due to the climate levy, the draft study by investment bank Lazard said.

Michael Bauchmüller, writing for the Süddeutsche Zeitung, also quotes the Lazard analysis on the climate levy's “domino effect.” If operators like Vattenfall and RWE earn less from older power stations due to the climate levy, they won’t be able to cross-finance other operations such as mining or other power stations, the study finds. “It’s one party’s word against another’s,” Bauchmüller says.

Detailing the basis for its calculations, the Lazard draft analysis, seen by the Clean Energy Wire, states that is doesn’t take actual economic optimisation of power station operations as envisaged by the Ministry into account.

Price-comparison website Verivox has calculated that a German employee had to work for an average 70 hours in 2014 to pay for the power costs of a four-person household. That’s 17 hours longer than ten years ago. While nominal earnings increased by 20 percent, costs for power rose by 60 percent over the past decade. A four-person household with an annual consumption of 4,000 kilowatt-hours spent an average of 1,135 euros on power in 2014, up from 712 euros in 2004. However, the Verivox press release says that if households still on the basic power supply tariff were to switch to the most inexpensive contract currently available, they could save around 350 euros per year.

The southern state of Bavaria wants to scupper plans for new power lines to transport renewable power from wind turbines in the breezy north to the energy-hungry industries in the south, according to Süddeutsche Zeitung. The Christian Democrat-led government said it would block construction in ecologically sensitive areas such as mountain ridges with local planning laws, even though it had explicitly transferred responsibility for the project to the national level only two years ago, reports the paper. The Social Democrats said the government’s blocking tactic was gambling away the Energiewende while the Green Party said state premier Horst Seehofer was falsely pretending to the public he could prevent the necessary power lines.

German state-owned KfW bank is still heavily invested in building new coal mines, coal-fired power stations and other coal-related infrastructure abroad, Hermannus Pfeiffer reports in the Tagesszeitung (taz). A representative from NGO Urgewalt told the paper that German energy and engineering companies were very active in the international coal business, and thanks to the KfW they were receiving large export orders. KfW recently announced that it would start buying green bonds to help finance climate and environmental protection projects around the world. It will also invest in a wind park in Uruguay and a “green” power grid in South Africa, the taz article says.

Power output from solar panels installed in Germany has set a new record and is bound to increase further in coming weeks, reports Bloomberg. Solar output peaked on Wednesday at an all-time high of 27.7 gigawatts, topping the previous record of 24.2 gigawatts set in June last year, when fewer panels were installed, according to figures from weather forecaster MeteoGroup. One gigawatt equals the capacity of a nuclear reactor. In the coming weeks, more records are expected. “Until June 21, the longest day of the year, the possible solar output will be rising daily,” meteorologist Marcus Boljahn told Bloomberg.