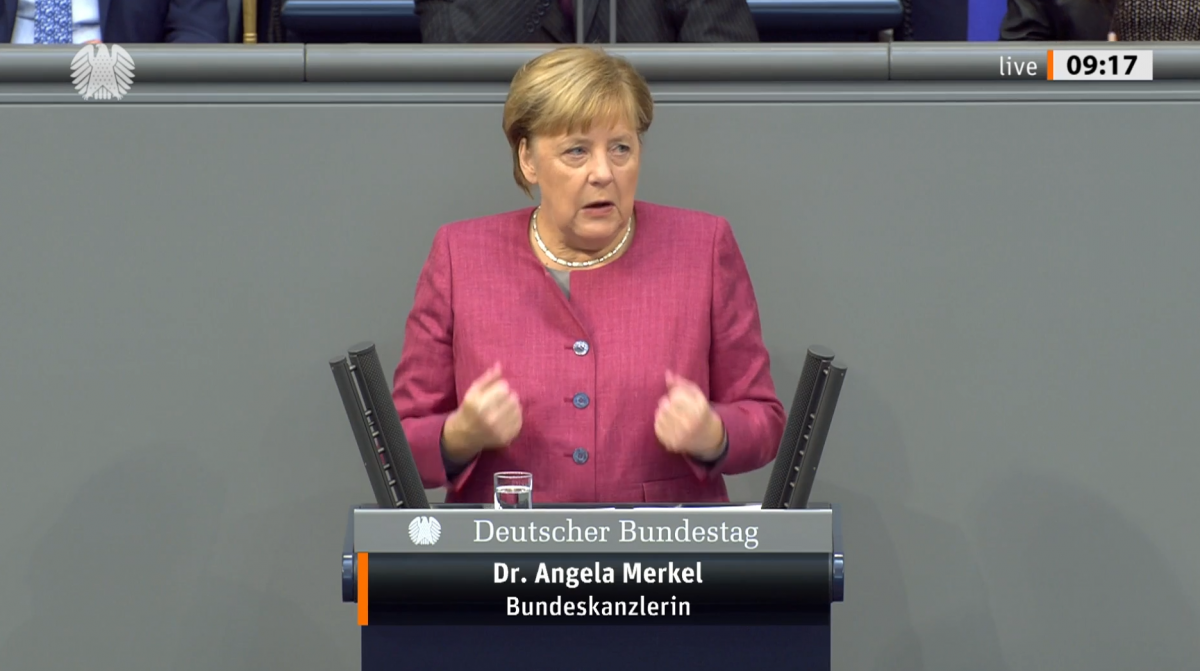 German Chancellor Angela Merkel has thrown her weight behind the European Commission’s proposal to increase the bloc’s climate target to a 55 percent greenhouse gas reduction by 2030. Speaking in federal parliament, she said the country's current EU Council presidency would work towards achieving a unanimous decision by all EU member states by the end of the year.

Chancellor Angela Merkel said the German presidency of the EU Council would "fight" to make member states agree a greenhouse gas reduction target of 55 percent, as proposed by the European Commission, describing climate action as the “large task for the future that we must put at the forefront.” Speaking in the German parliament during a federal budget debate, she added: “By the end of the presidency, our aim is to have a unanimous decision by all member states that we agree on this 55 percent target for the EU.” This has to be achieved by the end of the year to allow for regulatory implementation in 2021, Merkel said.

The European Commission under president Ursula von der Leyen has proposed an increase in the bloc's 2030 greenhouse gas reduction target to “at least 55 percent” (currently 40%), but the decision is far from taken. Member states, some of which have cautioned against too much ambition, still need to agree on their position before a final target is embedded in the planned EU climate law after negotiations with the European Parliament.

Germany has long made finding an agreement on the issue among member states one of the key climate policy objectives of its EU Council presidency in the second half of 2020. However, the government has emphasised its role as a mediator and honest broker during these six months, so throwing its weight behind the Commission's proposal sends a clear message to member states.

Despite the current COVID-19 and economic crisis, Germany’s long-term challenges have not changed, Merkel said. “We can see at every turn that the effects of climate change are becoming increasingly visible,” she added, naming drought, the poor condition of the country’s forests and water scarcity as areas where climate change was already visible in Germany. Talking about international climate policy cooperation, Merkel said: "It's beyond doubt that we have to cooperate with China on climate action and it's good news that China stands by the Paris Agreement, in contrast to other emitters.”

While the EU is on track to overshoot its current target of reducing emissions by 40 percent, raising it to 55 percent would require significant additional efforts by the member states. Talks on the exact target which the German Council presidency aims to facilitate could become quite a challenge.

Some eastern European countries, which rely on traditional polluting industries and face a hard time dealing with the economic and social transition necessary in order to become climate neutral, have been especially sceptical. Others have recently criticised the proposal for including emissions from the land use and forest sector, which is likely to take pressure off other areas, as the sector today net-absorbs more emissions EU-wide than in 1990.

The Nordic countries are among those pushing for more ambition. Finland said it was actively promoting an increase in target to “at least 55 percent”, as did Denmark and Sweden, which added that it should be in line with the Paris Agreement 1.5° goal.

Heads of state and government meet in Brussels 15-16 October and will likely debate the target – as will environment ministers a week later on 23 October during their next formal meeting.

It's beyond doubt that we have to cooperate with China on climate action and it's good news that China stands by the Paris Agreement, in contrast to other emitters.

Merkel had previously committed to von der Leyen’s initial proposal of 50-55 percent, but without further specifying whether she was in favour of the range’s higher end. Before that, Merkel had outright opposed calls for a more ambitious EU climate target. In 2018, she said, “We should first reach the goals we have already set. I don’t think that constantly setting new targets makes sense.” However, as concerns about heat waves and the Fridays for Future movement dramatically shifted public opinion in favour of more climate action, Merkel changed course.

German environment minister Svenja Schulze said the EU must significantly increase its 2030 climate target. “I am well aware that this is an enormous challenge for some member states, especially the coal mining and steel manufacturing regions of the European Union,” the minister acknowledged ahead of an informal meeting with her European Union colleagues. At the invitation of the German EU Council presidency, environment ministers meet in Berlin on 30 September and 1 October to debate the EU climate law, the 2030 climate target plan and biodiversity.

Speaking to journalists ahead of Merkel taking the stage in parliament, Schulze stopped short of officially backing the Commission’s target proposal of at least a 55 percent greenhouse gas reduction and merely said there were “very good arguments” for it. She also made clear that the decision would not be set in stone forever, as the Paris Agreement stipulates that governments revisit their targets every five years. The role of the German Council presidency is to bring together the most ambitious states with those that have most doubts and reach an agreement, she added. “My goal is to reach an agreement on an enhanced 2030 climate target during the German Council presidency.”

Noting China’s recent pledge to reach carbon neutrality before 2060, Schulze said that “two of the world’s economically most robust regions” – the EU and China – are now reinforcing the effectiveness of the Paris Agreement. “International climate policy is gaining momentum and we are perhaps at a crucial turning point for the future of this planet.”