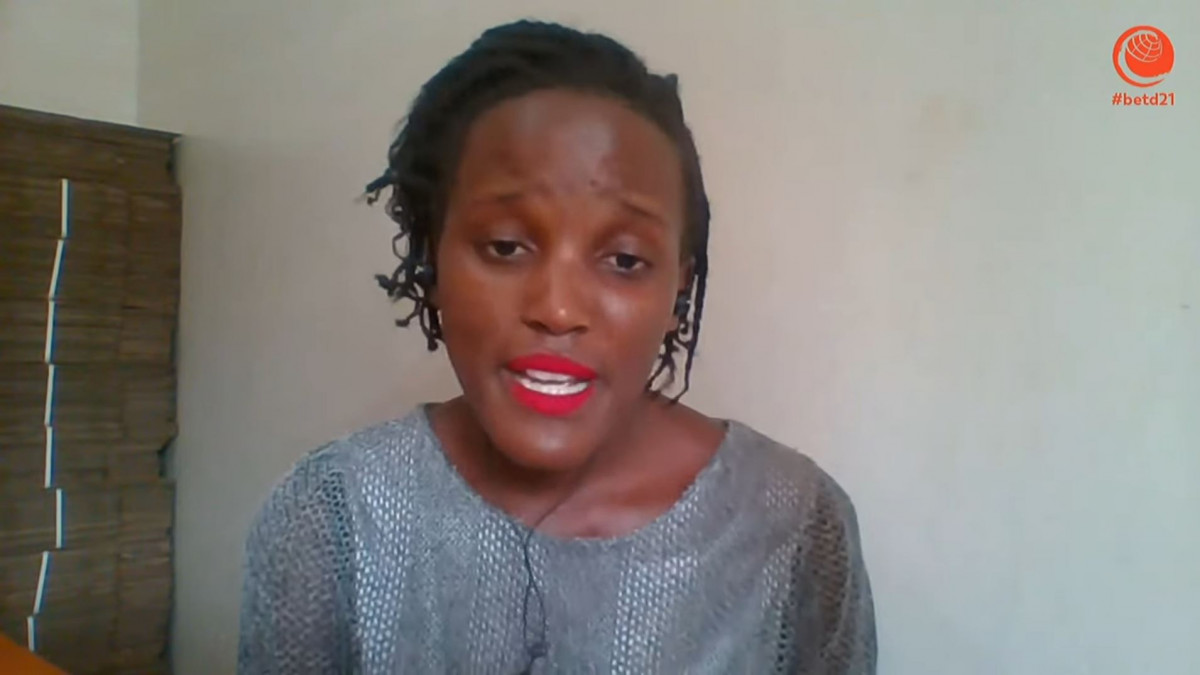 “It is the leaders who have failed us, not the young people," climate activist Vanessa Nakate told the conference. Source: BETD.

Germany’s foreign minister Heiko Maas and economy minister Peter Altmaier have called for closer global cooperation in key energy transition areas, such as green hydrogen, to help the world reach ambitious climate targets. As renewable energy sources increasingly replace fossil fuels, the global energy landscape is changing, bringing about opportunities but also risks, said the ministers at the Berlin Energy Transition Dialogue. Under its “hydrogen foreign policy,” the German government seeks dialogue with today’s oil and gas producers to support the shift and avoid disruptions, said Maas. Youth activist Vanessa Nakate said world leaders had failed to treat climate change as a real crisis, and criticised conference organisers for instructing her not to name and shame government officials and cutting her speaking time. European Commission president Ursula von der Leyen gave a preview of the climate and energy legislation package she plans to present by June, which would include a reform of the Emissions Trading System (EU ETS), extending it to the maritime sector. U.S. special presidential envoy for climate John Kerry said that countries had to forge an international climate strategy that drives greater ambition from all states [UPDATE adds Kerry's statements, BETD press office reaction to Nakate statements]

Germany’s foreign and economy ministers Heiko Maas and Peter Altmaier, respectively, have highlighted the need for closer global cooperation in energy transition fields like clean hydrogen and technological innovation as key to reaching the goals of the Paris Climate Agreement.

“We are the last generation in the history of the world that can prevent climate collapse,” said Maas at the Berlin Energy Transition Dialogue 2021. “We are anything but powerless. Therein lies the opportunity of this century.” The minister quoted U.S. special presidential climate envoy John Kerry as saying that the solution to the climate crisis lies in energy policy.

Both ministers as well as European Commission president Ursula von der Leyen highlighted green hydrogen as a key example for necessary energy policy cooperation. “Green hydrogen will be produced in countries and regions where the weather conditions of wind and sun are much more suitable than in Germany or in the neighbouring states,” said Altmaier. He said investments to develop new technologies for production, transport and application are needed now to build up the hydrogen economy of the future. “We don’t only need technological innovation,” he argued. “Above all, we need international cooperation. It cannot be about who is most powerful, but it must count who is most innovative.”

Vanessa Nakate, a youth climate activist from Kampala, Uganda, used her live speech to criticise both world leaders and accusing the organisers of the conference of censorship. Both her and fellow activist speaker Brianna Fruean’s speaking time had been cut down, she said. Organisers had insisted on seeing the text of their speeches ahead of time and repeatedly instructed them “not to name or shame leaders” that would be taking part in the conference.

“You should not ask activists to come and speak at your events so you can feel better, and then try to censor them,” said Nakate. “It is the leaders who have failed us, not the young people.” It was the leaders who had ignored the science and “failed time and again” to treat the climate crisis as a real crisis. She addressed those leaders and criticised them for continuing to invest in fossil fuels. “Aside from the destruction you are causing, your investments don’t even make financial sense,” she said an warned of stranded assets. She finished her statement by saying: “We cannot eat coal and we cannot drink oil.”

The Berlin Energy Transition Dialogue Press Office told Clean Energy Wire that the open format event enables speakers and participants to exchange controversial views as well. “This is precisely the intention of the hosts, the German government and the consortium of organisers that has been planning and running the event since 2015,” said Karsten Schäfer. He said that the time allotted to many speakers, also high-level ones, had to be reduced already during the planning stage, and that the transcripts of the contributions had been requested beforehand to help the work of the interpreters.

The Berlin Energy Transition Dialogue is an international conference of governments and experts, which has been organised by the German foreign office and the economy ministry in Berlin annually for seven years. This year, it is being held as an online conference due to the coronavirus pandemic.

In the fight against climate change, green hydrogen made with renewable electricity is increasingly seen as a solution for many areas where emissions are particularly hard to reduce, such as heavy industry and aviation. With their hydrogen strategies, both Germany and the EU aim to ramp up hydrogen technologies and become global leaders.

“Clean hydrogen can power heavy industries, propel our cars and trucks and planes, store seasonal energy and heat our homes. All of this with almost zero emissions,” said von der Leyen.

Maas said a “huge market of the future” is developing as hydrogen together with renewables offer “a way out of the global climate catastrophe that fossil fuels have brought us into. If oil used to be black gold, then hydrogen is the invisible gold of the future,” he said. However, the minister warned that the shift from fossil fuels to renewable energy sources, such as hydrogen produced with wind and solar power, would shake up energy geopolitics.

Fossil fuels have “shaped the political and economic map of the world” until now, being a cause of conflict but also profit for entire regions, said Maas. “All this is about to change.” New, inclusive energy spaces would develop as hydrogen could be produced almost everywhere. To use the opportunities and minimise the risks of the transition, the German government has a “hydrogen foreign policy”, said Maas.

Germany is setting up new frameworks for cooperation across the planet and would invest two billion euros over the coming years to help stimulate a global hydrogen market. It would also seek agreement on key framework issues, such as the question of what constitutes truly green hydrogen. The government would also support today’s fossil fuel exporters to avoid political disruption. Maas said his foreign office would intensify dialogue with countries such as Russia and Saudi Arabia “so that they can adapt their business models in good time.” 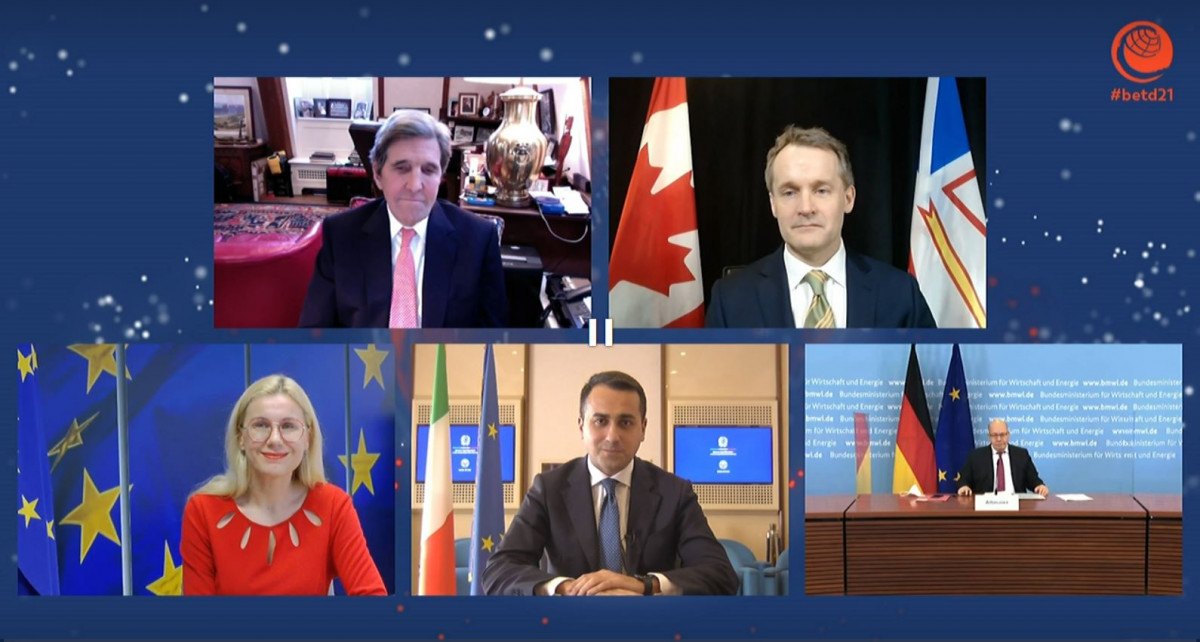 Politicians from both sides of the Atlantic called for more cooperation on energy transition policies and businesses. Source: BETD.

U.S. special presidential envoy for climate John Kerry said a zero-emissions future offered a “huge opportunity” for businesses. “We are actually looking at the largest market human beings have ever known.” The former state secretary emphasised that the 2020s must be the decade of ambition, decision and action, because the world needs to cut greenhouse gas emissions by half by 2030 to reach the Paris Agreement target of limiting global warming to 1.5°C. “Without any question at all we need to forge an international strategy that galvanises the world, that drives greater ambition from every single country,” said Kerry.

At a panel session following Kerry’s keynote address, leaders from both sides of the Atlantic highlighted the opportunities for cooperation on climate action. “If we can provide leadership together, join forces and convince other countries like Japan, South Korea, China and many others to follow, then we will make a difference,” said Germany’s Peter Altmaier. Kerry tried to alleviate worries that the next election might again turn the tide on U.S. climate action. "No politician is going to come along in a year, or 2 or 3 and possibly be able to turn around what major corporate enterprises and governments across world are going to commit to."

The United States re-entered the Paris Climate Agreement after Joe Biden became president this year, kicking off a series of actions, events and announcements that made clear the new administration wants to be back at the international climate table. Government officials from the U.S. and the European Union and its member states have repeatedly confirmed their aim to reset transatlantic relations to tackle global challenges such as climate change together.

Von der Leyen said the European Commission would come up with proposals “to revise our entire climate and energy legislation” by the summer to enable the bloc to reduce emissions by at least 55 percent by 2030, the target currently under discussion among EU institutions.

She gave a brief preview of what her institution would propose: “We will enhance the EU Emissions Trading System and extend it to the maritime sector and better apply it to aviation.” The Commission is also considering introducing emissions trading for the buildings and road transport sectors, she added. It would also propose legislation to boost renewables and “take green financing to the next level,” she said. “To achieve our 2030 goal, we need to boost green investment.”