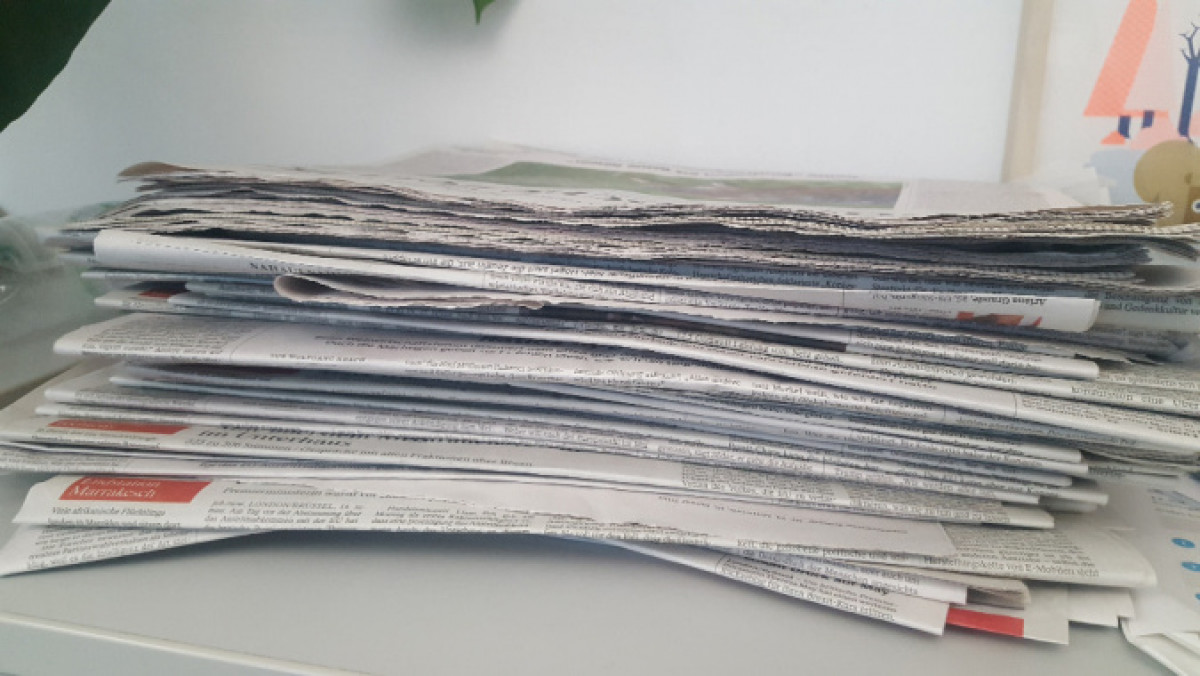 The quest for the correct terminology on climate also preoccupies journalists, publishers and broadcasters in German-speaking countries; Photo: Carel Mohn.
Are semantics the reason we're losing the battle against global warming? Some English-language media, such as the British daily newspaper The Guardian, have recently revised their editorial guidelines, setting rules for the language reporters can use in climate reporting. Will German-speaking media follow suit? What's the thinking in Germany, Austria and Switzerland? This article is part of the Covering Climate Now Initiative, in which more than 250 media outlets across the world joined efforts to dedicate themselves to a big push on climate change reporting this week.

A recent editorial decision created a considerable stir in the media industry. A few months ago, the British daily newspaper The Guardian and its Sunday companion The Observer changed their editorial guidelines for certain language pertaining to climate. Conventional terms such as “climate change” or “global warming”, they decided, don’t do justice to the dramatic research findings of climate scientists. Instead, in future, they will refer to these as “climate crisis” or “climate emergency”. In addition, people who doubt or deny current scientific knowledge on the climate will from now on be referred to as “science deniers” (as opposed to “climate sceptics” as they euphemistically refer to themselves).

But the two newspapers were not the first. Other media, such as the British broadcasting service BBC or the US news agency AP, have also specified or amended their internal rules for climate reporting. But is this trend limited to the English-speaking media world? What do German-speaking editorial departments think of this development? Are there even similar regulations such as those at The Guardian & Co.?

Bernhard Pötter could not help but laugh when he was asked: “Rule by decree at the taz??” For many years now, Pötter has covered climate issues for the left-leaning alternative newspaper, tageszeitung,or taz, in Berlin. That kind of edict “would never work with us”, he said. Needless to say, a debate is raging in the editorial office about whether terms such as “Erderhitzung”, a very literal description that translates to “the heating up of the Earth”, “Erdüberhitzung” – the even more pointed “overheating”, or “climate crisis” would be more appropriate. The Germans already use “Klimawandel”, similar to the English “climate change”, which Pötter finds is a good way of expressing this phenomenon: “It describes that something big, something threatening, is taking place”. Rather than talking about terminology, Pötter believes the debate should focus more on measures to stem the danger itself.

"'Climate crisis' is a more powerful concept. But most people see the bigger picture when they hear the words 'climate change' too: namely a serious threat."

There is no editorial rule at Süddeutsche Zeitung either. “I myself am increasingly using the term ´climate crisis´”, says Michael Bauchmüller, who is responsible for the topic in the SZ’s Berlin bureau. Although at his newspaper some concepts “are a no-go”, this does not apply to the words “climate change”. “Clearly, ´climate crisis´ is a more powerful concept. But most people see the bigger picture when they hear the words ´climate change´, too: namely a serious threat,” Bauchmüller says,

The German Press Agency (dpa) has 179 shareholders, exclusively media companies such as publishers and broadcasters. The agency supplies them with texts for printing or editorial purposes – the dpa thus provides orientation across the spectrum of German journalism. According to their statute, the dpa is “non-partisan and independent of effects and influences from parties, ideological groups, economic and financial groups, and governments.” In an internal set of guidelines called “language compass”, the agency determines which terms their journalists should and should not use. “Foreign infiltration”, for example, which is a propagandistic notion of struggle adopted by right-wing populists and extremists, is taboo in dpa texts.

“We are currently discussing our terminology related to climate reporting,” says dpa spokeswoman Christina Gambarini, but no decisions have been taken yet. “Just this much: we already use “Erderhitzung” now and again. But we don’t write about “science deniers” in this context, and will certainly not do so in the future either – not least because climate research is only one part of global science.”

Journalists and media houses in the German-speaking world have taken it upon themselves to search for the correct climate terms. “There can be no doubt that the Guardian´s initiative ignited a debate in Germany too,” says an editor on the science desk at Zeit Online. Similar discussions are also taking place at Der Spiegel, one employee told klimafakten.de.

Werner Eckert, a well-known environment reporter for Germany’s big state broadcaster ARD, is not at all in favour of the term “climate crisis”. Crisis is inherently episodic: “Crises are either solved or they pass,” he says. Therefore, “crisis” is totally inappropriate for human-made climate change. “We know that global warming will probably never stop, and at the same time, we know that we are infinitely far from finding a solution to the problem.” According to Eckert, the concept “climate crisis” is therefore misleading. He also dislikes the words “climate emergency”: "One city after the other is declaring a state of climate emergency – without it having any real consequences!”

“´Climate change´ should not be superseded by ´climate crisis´ because crisis is understood as a temporary state, and while it may be far-reaching and long-lasting, it gives the impression that a return to normality is possible. That is already impossible.”

Eckert heads up the environment and nutrition coverage at SWR, the ARD’s southern German broadcast arm. But his work is used in the ARD’s entire public network. Eckert also admits that “climate change” is too weak a term for the situation: “I believe “Erderhitzung” (global heating) or “Klimaerhitzung” are better descriptors and I increasingly use them as well.”  For him, how the subject is presented is more important than its terminology. “I attempt to describe the dramatic nature of the facts as precisely as possible.”

Joachim Wille, longtime environmental editor at the newspaper Frankfurter Rundschau and now editor-in-chief of the Berlin online portal Klimareporter.de agrees: “´Climate change´ should not be superseded by ´climate crisis´ because crisis is understood as a temporary state, and while it may be far-reaching and long-lasting, it gives the impression that a return to normality is possible. That is already impossible.” Yet, Wille also acknowledges that we are “right to warn against an ´imminent climate disaster´ or an ´impending climate collapse´.” It is common knowledge that a temperature rise of more than 1.5 or 2 degrees will lead to dramatic changes; “and the world is now on the path towards a rise of three to four degrees.” 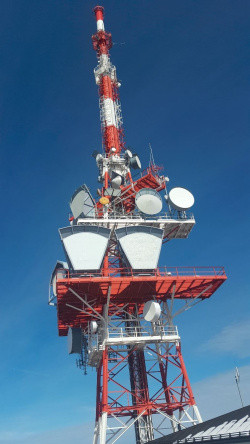 The ORF broadcaster in the border triangle between Austria, Germany and Switzerland guarantees good radio and TV reception. But how do concepts used in TV and radio impact on the audience? Photo: Carel Mohn.

The Austrian counterpart of the dpa is the Austria Press Agency: APA in short. It is owned by twelve of the country´s daily newspapers and the public ORF. “We continually reflect upon our journalistic work and the formulations in our reporting – that also applies to environmental-and climate-related topics or climate policy”, explains APA editor-in-chief Johannes Bruckenberger. In their own reporting, they use the words ´climate change´, the well-established scientific concept, as well as the term ´global heating´ “which has been repeatedly used in the recent past.” The term ´climate deniers´ can also be found in APA reports. Bruckenberger: “From a journalistic perspective, it is less about forcing or specifying a certain framing, but instead reporting the objective facts and giving a clear name to things. The dramatic development of climate change, as corroborated by scientific studies, will continue to be reflected in our reporting over the coming years. The concepts will be adapted to developments as part of an evolutionary process.”

Günter Pilch, environmental editor of the Kleine Zeitung from Graz, also refrains from using the words ´climate sceptic´. In fact, he suggested that these people display a type of “healthy scepticism” – but which is false “in the vast majority of cases.” Pilch takes the view that the words ´global heating´ are already used in a number of Austrian media, including their newspaper. Yet, ´global warming´ is more prevalent at the moment. The picture is similar for ´climate change´ and ´climate crisis´.

Switzerland: SRF won’t give a platform to purveyors of “fake news”

In Switzerland, the public has also been debating language. Three years ago in the (since closed) Basel newspaper TagesWoche, Stefan Boss wrote a detailed article on the topic with the heading: "Why climate warming is actually a climate heating." He himself, says Boss, uses both terms. The words “climate change” help “get people on board”, but the words “climate heating”, describe the phenomenon more precisely. The journalist Christian Mihatsch also called for similar changes well before the Guardian´s decision. In April of this year, in an article for the Swiss media magazine Edito, Mihatsch wrote: “While people are exaggerating everything in life as a ´crisis´, the media describe the only existential crisis facing humanity as ´change´. Talk of a ´climate emergency´ is long overdue.”

“Of course I thought about the Guardian´s message,” says Martin Läubli, a Zurich-based science journalist at the newspaper Tages-Anzeiger. There is no official debate taking place in his editorial office, he says: “In general we have trouble with the word denier since it is reminiscent of terms such as Holocaust denier. Although it is irrational and fundamentally wrong, we continue to use ´sceptic´.” Läubli also refuses to use the term “global heating” in place of “global warming”, “because “heating” suggests something alarming, and precisely this was and continues to be one of the problems of today´s climate debate”. Läubli believes a factual, objective debate is needed – and the term “global heating” doesn’t contribute to this.

When it comes to such terms, the public broadcaster SRF has “no uniform and stringent policy like the BBC”, says Mark Livingston, head of news at SRF. From a scientific perspective, he says, the question of whether climate change is man-made was decided long ago. Therefore, the SRF recently stated in an internal paper: “It is our job to hold this discussion in a differentiated way – taking all interest groups and political views into account. Yet a differentiated discussion does not call for giving a platform to those who completely deny man-made climate change and consider it a conspiracy created by scientists and the media,” says Livingston. Hence, the SRF is in full agreement with the position adopted by the BBC. “Those who declare proven facts to be fake news, should go ahead and do it, but not at SRF. This does not mean that we are exercising censorship, but instead are taking our journalistic role seriously.”

This article was first published on klimafakten.de, the Clean Energy Wire team's German language portal on climate science and climate communication, on 17 September 2019. It was translated by d-interp and edited by Ellen Thalman.