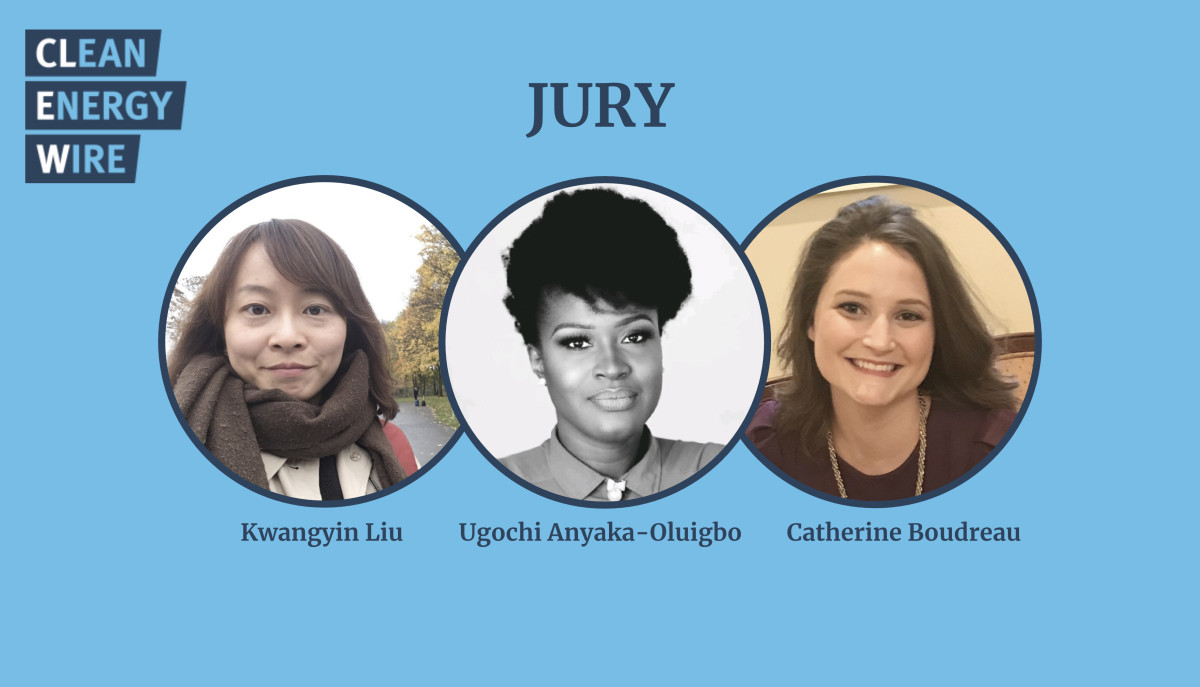 Companies around the world are increasingly making bold claims about becoming net-zero, and producing "climate neutral" products. Do these claims remain consistent across supply chains? Are companies' efforts to be taken seriously, or are they mere examples of greenwashing? What role does carbon offsetting play? The three accomplished journalists that will select the winners of the Clean Energy Wire grant for cross-border reporting on corporate climate claims, Ugochi Anyaka-Oluigbo, Catherine Boudreau and Kwangyin Liu, share insights on the importance of cross-border journalism and tips on how to deliver a successful pitch.

The three winning pitches of cross-border stories with a focus on company climate claims will be selected by Ugochi Anyaka-Oluigbo, an environment and conservation journalist, creator of the Green Angle TV show, an award-winning environmental show aired in Nigeria, and the productor and presenter of several podcasts on the impacts of climate change; Catherine Boudreau, a senior sustainability reporter at Insider who also helped launch POLITICO’S first sustainability beat focused on corporate accountability; and Kwangyin Liu, editor at the CommonWealth Magazine 天下雜誌. Journalists can pitch their work until 20 October 2022.

“We need cross-border collaborations of journalists to scrutinise climate claims because scrutinising a company's work in just one country could miss the bigger picture,” jury member Catherine Boudreau said when asked about the importance of a cross-border approach. “The world's largest companies have sprawling supply chains. This kind of scale means their climate promises - if upheld - could make a real dent in greenhouse gas emissions, reduce biodiversity loss and improve the lives of people who live and work in some of the most vulnerable communities.”

Ugochi Anyaka-Oluigbo adds that these grants give journalists an opportunity “to investigate operations of corporations across borders, to dig deeper, follow the money and track how natural resources are sourced and exported.”

According to Kwangyin Liu, “cross-border journalism is now more important than ever, especially for the coverage of corporate climate pledges, because business operations are increasingly globalised and their claims need to be examined by an equally globalised journalism team to keep corporates in line with their promises.”

On tips for teams of journalists who want to apply, they gave the following advice:

1. Look at the story with different lenses

There are many ways to approach this topic. An obvious - but very important one – is to follow the money. If a company isn't backing up a climate promise with funding, where is the money going instead? Secondly, human stories can be very impactful. While statistics and data are important, human stories tend to leave a lasting impression on readers. Think about how a corporation's actions are impacting their workers and the communities where they operate.

2. Start in familiar territory
If you haven't covered this topic before or are not an experienced climate reporter, choose a subject matter you are familiar with. For example, if your beat is sports, choose a football club and look closely into their climate practices.

There are lots of good stories to find and tell. It’s not all always about doom and gloom. Amplify the exemplary stories.

With these insights in mind, go collaborate and apply for our cross-border grant!