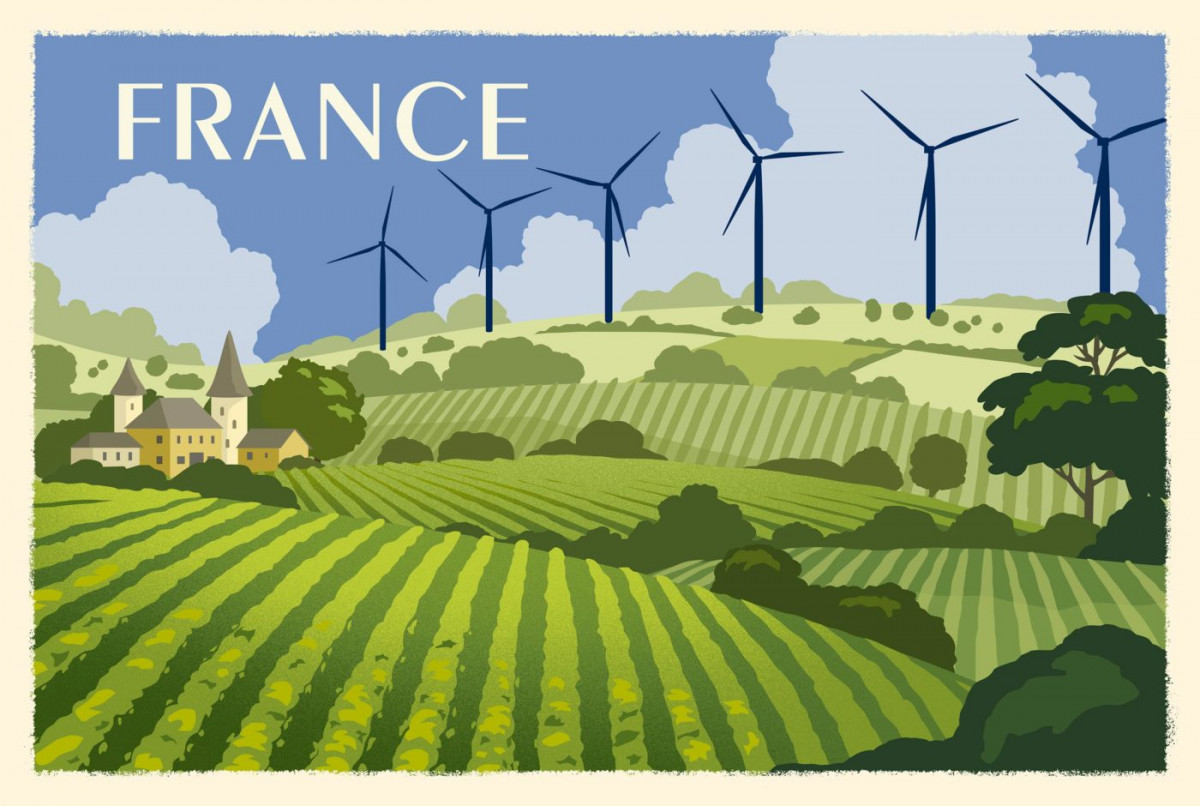 The two countries have been solid partners throughout the Trump era and France is now watching China's investments closely, both at home and abroad.

This report is part of the "Postcard from Europe" series about the cooperation between China and Europe in the fight against climate change. Contributors from various EU member states describe how this relationship is seen in their home country, and what impact it already has. The project is a collaboration between Clean Energy Wire and China Dialogue, a non-profit organisation dedicated to promoting a common understanding of China's environmental challenges.

In autumn 2019, President Xi Jinping welcomed President Emmanuel Macron for a state visit in Beijing. France and its European partners were hoping that China, the world’s second-largest economy, would open its markets to agricultural and financial products, manufactured goods and other services. But the meeting will be remembered for something quite different: an unequivocal reaffirmation of the two countries’ commitment to the Paris climate agreement, which they dubbed the Beijing Call for Biodiversity Conservation and Climate Change. A few days earlier, Donald Trump had formally started the process of pulling the United States out of the Paris Agreement, only three years after it had come into force.

That France and China teamed up on climate was no surprise. As the country where the agreement was reached in 2015, France holds a symbolic role in its safeguarding and in pushing for more ambitious pledges by its signatories. In 2017, President Macron launched the Make Our Planet Great Again initiative, following the decision of the US to leave the Paris Agreement – the name playing on Trump’s Make America Great Again motto.

For China, it was no surprise either. “In the context of the deteriorating relationship between China and the United States for the past four years, China has constantly made efforts to avoid the EU being swayed to the US side in this confrontation,” says Marc-Antoine Eyl-Mazzega, director of the Center for Energy & Climate at the French Institute on International Relations (IFRI). Hence, China has been trying “to build a special relationship with the EU, including France. While investments, intellectual property and protection for businesses are difficult issues under discussion, China also stood out from the US on its climate and biodiversity positions.”

Furthermore, France and China were about to share the same agendas in 2020 on environmental diplomacy. In June, France was supposed to host the World Conservation Congress of the International Union for Conservation of Nature, in Marseille. And the COP15 of the Convention on Biological Diversity was going to be held in Kunming, China, in October. The Covid-19 crisis changed those plans and both meetings have now been postponed to later this year. But France and China were on the same page, both demonstrating leadership on climate and biodiversity.

“China has long been involved in the fight against climate change,” says Sylvie Matelly, deputy director of the French Institute for International and Strategic Affairs (IRIS). “The Western world, including France, is only starting to realise that China… could be a main and indispensable actor in the ecological transition… For the past four years, negotiations about the environment have taken place with China – not with the USA,” she adds.

What none of these French experts expected was the announcement of President Xi, via video link to the UN General Assembly in September 2020, that China will aim for carbon neutrality by 2060.

“The pledge made by China is of course a step in the right direction. With this country being the largest emitter, it definitively enhances the chances for global warming of only 1.5C above pre-industrial levels. If China respects it, it could decrease by 0.2C to 0.3C the current pathway and thus have a considerable impact for a sustainable future,” says Lucile Dufour, international politics advisor at Climate Action Network, France (CAN).

Despite those encouraging announcements, more details on what is to come are eagerly awaited in France. For instance, how will China reach peak carbon emissions before 2030, and how will it actually implement its net-zero target for 2060? “Details must be provided for the COP26 summit as all nations are expected to deliver their updated Nationally Determined Contributions,” says Dufour. China has a specific status: despite having ratified the Kyoto Protocol, it was not required to reduce its carbon emissions. For the first time, China will now face binding climate goals. Will it honour them? “China’s general planning frameworks are usually clear and announcements have been consistent with reality. Regarding climate… it will have to adopt bold policies, such as phasing out coal by 2040 at the latest, as the country is still the largest producer and consumer of coal,” says Dufour.

For Eyl-Mazzega, at IFRI, China might well keep its word on climate. “There is particular attention paid to the environment by Chinese citizens. We barely hear about it in France, but most popular protests in China are either linked to food security or to pollution – and political leaders in China know well about this.”

Another issue that is raising concern in France is China’s investments. With a population of 1.4 billion and a dynamic economy, China has growing needs for imported raw materials that can cause environmental damage abroad. For instance, Chinese imports of Brazilian soy have been linked to the deforestation of 223,000 hectares between 2013 and 2017, according to the monitoring project Trase. “It’s easy to blame them,” explains Eyl-Mazzega. “But we also have to look at the fact they are a growing economy that still has millions of people living in poverty. Yes, they are the world’s biggest emitter and their emissions per capita are already greater than a European country like France, but if they emit so much, it’s also because we have moved overseas, especially to China, some of our polluting industries. And none of the official data on countries’ emissions take this reality into account.”

China is also questioned in France over its investments in coal-fired power plants. This is true both domestically, where China has 121 gigawatts of capacity under construction to add to its roughly 1,000 gigawatts of existing capacity, and abroad. Via its Belt and Road Initiative, under-construction China-financed coal power plants will produce 19 gigawatts of power and emit 115 million tonnes of carbon each year, according to data from Boston University’s Global Development Policy Center cited on Phys.org. “The Chinese strategy with the Belt and Road Initiative has been problematic so far,” notes the IFRI researcher. “It puts global climate goals at risk. When challenged about these coal investments abroad, China has continuously denied responsibility, claiming it is only meeting other countries’ demands. It’s a difficult position to hold: affirming your commitments to strong climate goals, and at the same funding polluting industries in other countries where there are other, low-carbon solutions at hand.”

The good thing is Chinese investments in the EU and France have mainly focused on the energy transition and not fossil energies.

Sylvie Matelly, deputy director of the French Institute for International and Strategic Affairs

Chinese investments in France are another key climate issue. “The good thing is Chinese investments in the EU and France have mainly focused on the energy transition and not fossil energies,” says Sylvie Matelly, at IRIS. This is the case for nuclear projects (some experts don’t consider nuclear to be sustainable energy, because of the risks posed by the technology, whereas others think it is because it produces zero-carbon energy). EDF, a French multinational electric utility company, has for instance partnered with the China General Nuclear Power Group (CGN) to build a third-generation European Pressurised Reactor (EPR) at China’s Taishan nuclear power plant, which first entered commercial operation in December 2018. The two companies are planning to collaborate to build several other EPRs in the United Kingdom. Chinese and French companies have also teamed up in the offshore wind sector. The French DOLFINES and China’s CIMS Raffles have for instance signed a memorandum of understanding agreeing to cooperate on boosting floating wind farms in Europe and Asia. The construction of China’s first offshore wind power plant with foreign investment began in October 2020 in Jiangsu province, bringing together the EDF group and China’s Energy Investment Corporation. Back in 2016, French company Velocita Energy Development also announced the sale of 500 megawatts of its onshore wind projects in France to Chinese wind turbine maker Envision Energy. Four years later, in October 2020, Envision announced the “Vannier-Amance” wind farm, its second wind farm in France.

“Aside from partnerships like the one between EDF and CGN, buying French companies has been the main way for China to invest in the French market,” says Matelly. “When you buy a company, you control it, and you control the technologies it has developed as well.” This kind of threat is not new and not particularly linked to Chinese investments: some of the EU’s members states have been sounding the alarm about it since the 1990s when an American company tried to buy a German company to have it build submarines for Taiwan. After years of development, the EU framework for screening foreign direct investment (FDI) became fully operational on 11 October 2020. It is “becoming instrumental in preserving Europe’s strategic interests while keeping the EU market open to investment”, said a European Commission press release.

Sylvie Matelly has just finished reviewing a study on FDI. “Out of the 22 EU countries that control foreign investments, 80% have placed energy transition in their spectrum of control – acknowledging how important this sector is and will be in the future,” says the researcher. But she also notes that French industries are often vulnerable. “What do you wait for when you’re a French company?” she asks. “You wish the technologies you have created could develop and reach a broader market. For that, you need investments.” But this is not the trend now in France: neither French investors nor banks will support you. As France is well known for its engineers and its technological know-how, it attracts foreign investments, including Chinese ones. “Of course companies have no choice but to accept this money – even if it means the technology will be ‘lost’ for France,” adds Matelly.

In the meantime, the EU and China are still discussing trade and economic relations. During the 22nd bilateral summit held in June, Charles Michel, president of the European Council, made it clear that the EU and China must work together on global challenges like climate action and that engaging and cooperating with China “is both an opportunity and necessity”. But he also pointed out that the EU and China “do not share the same values, political systems or approach to multilateralism”.

Eyl-Mazzegaconcludes that “2020 has been a difficult year for China”, referring to how it handled the Covid-19 crisis, the status of Hong Kong and human rights issues, which have strained the relationship with France. “As a result, the European Union is much more assertive and aligned on China. France and the EU will have to strike the right balance between cooperating on the climate, biodiversity and trade while facing the fact China is a strategic rival notably in low-carbon technologies and dealing with possible US pressures to decouple from China.”