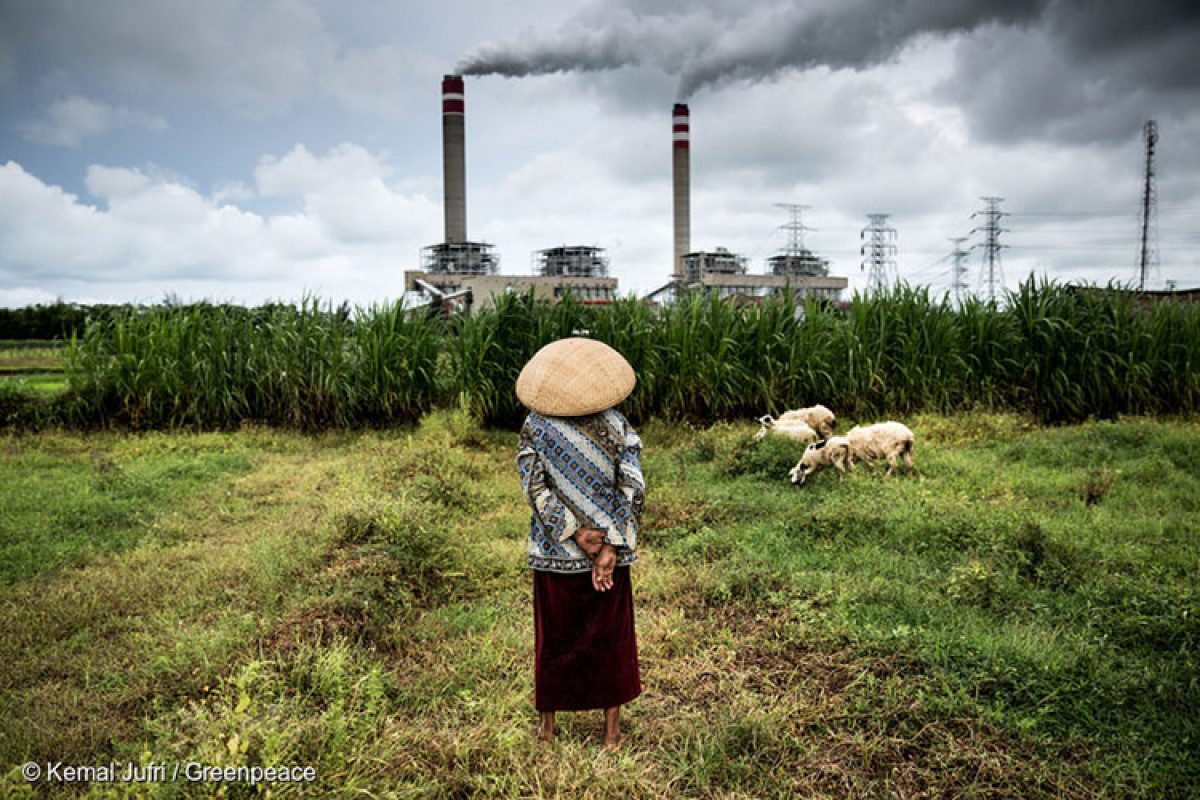 Ten journalists in five Southeast Asian countries received training to analyse national media narratives on clean energy and coal – and suggest ways to improve coverage. Their work was commissioned as part of 'Fuelling the Tiger Cubs: How Southeast Asia's Media Is Covering Coal's Last Frontier' organized by Climate Tracker and the Stanley Center for Peace and Security. Find out more about the project and the main challenges and opportunities to improve clean energy reporting in Southeast Asia.

Global demand for coal may be dropping but Southeast Asia’s use of the fossil fuel is on the rise. If trends continue, the Association of Southeast Asian Nations will surpass the United States and the European Union to become the world’s third largest coal-consuming region by 2025, according to a report by the International Energy Agency.

Countries in the region need to transition away from coal and other fossil fuels and toward renewable sources as quickly as possible in order to meet growing energy demand while still lowering climate-warming carbon emissions.

And it is here that journalists and news organisations, in how they cover and frame coal and clean energy stories, play an influential role. Decisions about which stories to cover, how to frame them, who to use as sources, and how much prominence should be given to clean energy themes help shape public and policymaker perceptions about the region’s energy future.

To better understand the dominant coal and clean energy media narratives at this pivotal moment in the region’s development, the journalism and media team at the Stanley Center teamed up with Climate Tracker — which has a strong network of young local journalists in Southeast Asia — to co-organize a multi-country media analysis of Southeast Asia’s leading national news outlets in 2020.

Ten researchers from Vietnam, Malaysia, Thailand, Indonesia, and the Philippines - the five Tiger Cub Economies of Southeast Asia - spent three months researching their own country’s media trends. Trained and guided by Climate Tracker, they conducted a total of 99 interviews with journalists and analysed 2,700 articles published over a 15-month period.

Their findings — which include recommendations for journalists and media organisations to strengthen clean energy reporting — are captured in a series of reports published as part of Fuelling the Tiger Cubs: How Southeast Asia’s Media Is Covering Coal’s Last Frontier.

Across the region, journalists and news outlets face editorial and financial pressures that influence coverage of energy topics. Yet, each country was found to have its own unique strengths and weaknesses in energy reporting.

For example, positive coverage of coal is typically higher in countries that are using more coal. Reasons vary from country to country, but most journalists at mainstream news outlets are encouraged to frame energy as a business or economic story, as opposed to a climate or human impact story. Across all five countries, hard news articles with only one source overwhelmingly relied on business or government voices - to the neglect of community leaders or citizens directly impacted by power projects.

But there may be hope with the emergence of niche, independent news outlets and initiatives that are providing more space for in-depth and innovative reporting on clean energy topics. 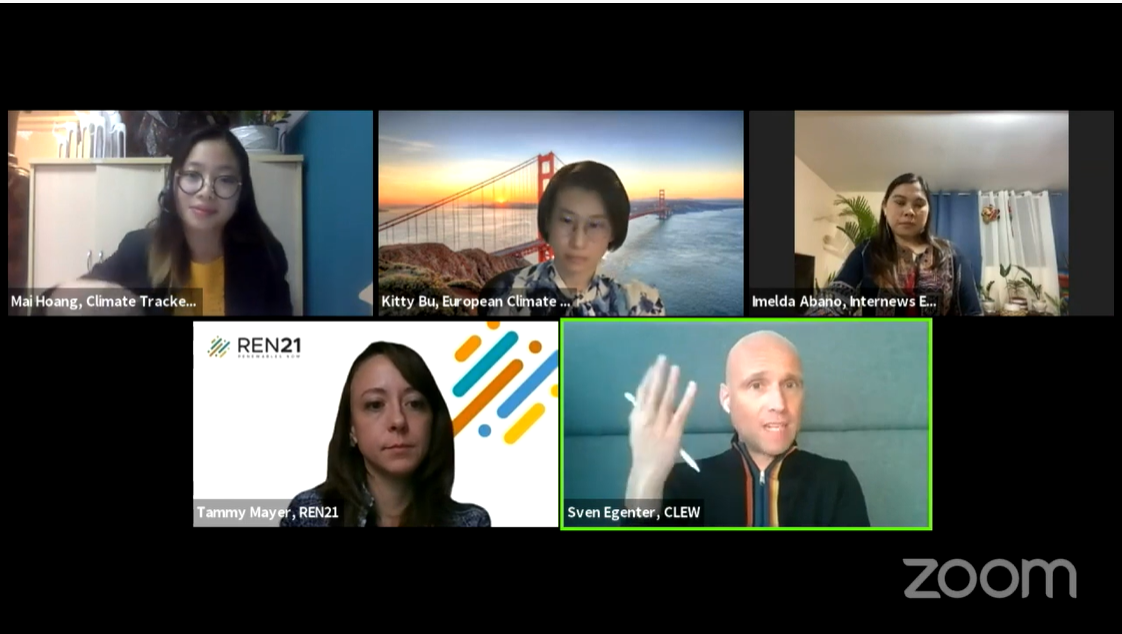 A screenshot of the release event of the Fuelling the Tiger Cubs report.

Takeaways for journalists and others

One of the goals of the project was to bring the findings to a broader community of journalists, newsrooms, media support organisations, funders, and climate policy and clean energy advocates.

The final report of the project - a regional action plan written by Mai Hoang- outlines the main challenges and opportunities to improve clean energy reporting in Southeast Asia in 2021 and 2022. The report, which draws from the media analysis as well as from consultation processes in each country, highlights ten specific actions that address the most critical gaps, build on the existing capacity of regionally-based media support organisations, and have strong potential for impact.

Now that all of the reports have been published, journalists are using the research and recommendations to apply for grants and develop training programs to improve clean energy and climate reporting. Various international and regional NGOs have reached out to learn more about better supporting journalists and media organisations as the energy transition evolves. Media funders have similarly been interested in the findings and suggested actions as well as the overall approach to the analysis. 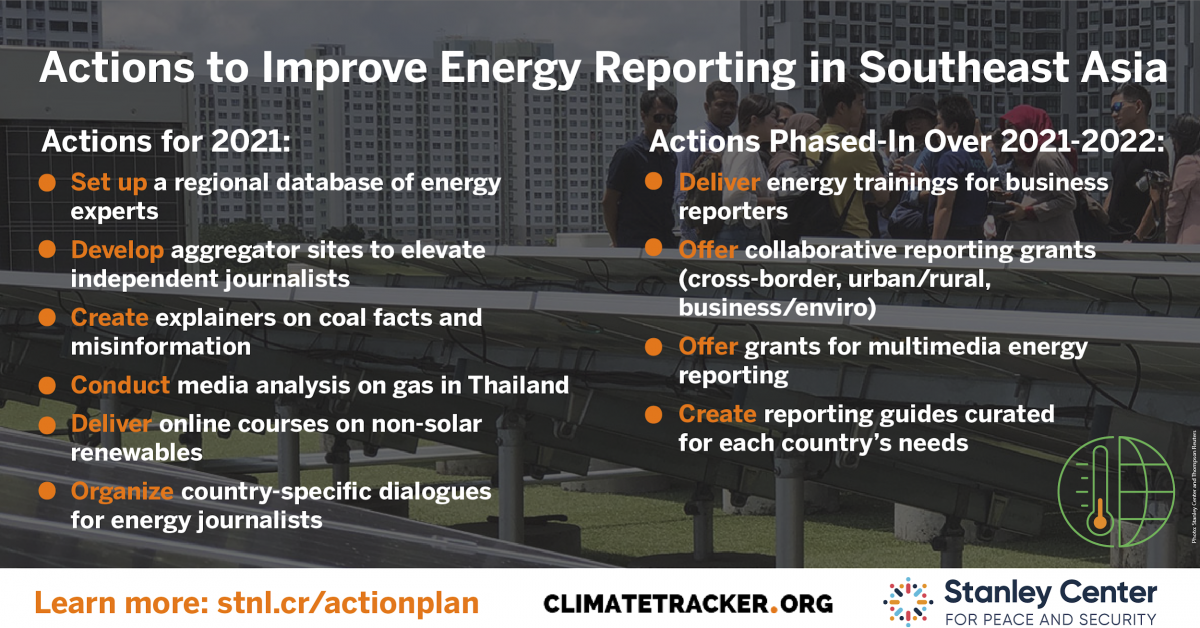 Energy stories matching the reality on the ground are more important than ever as countries in Southeast Asia — and around the world — decide on their clean energy targets and make commitments to lowering carbon emissions in line with the Paris Agreement.

The Fuelling the Tiger Cubs reports and roadmap for action offer insight into what is missing and what more can be done to equip journalists, editors, and media organizations with the opportunities and resources needed to improve and sustain coverage over the next two years and beyond.

To access the comprehensive regional analysis and action plan — recently released in five languages of the region — as well as country-specific reports, click here.

If you see an action item that you’d like to learn more about, drop us a line.