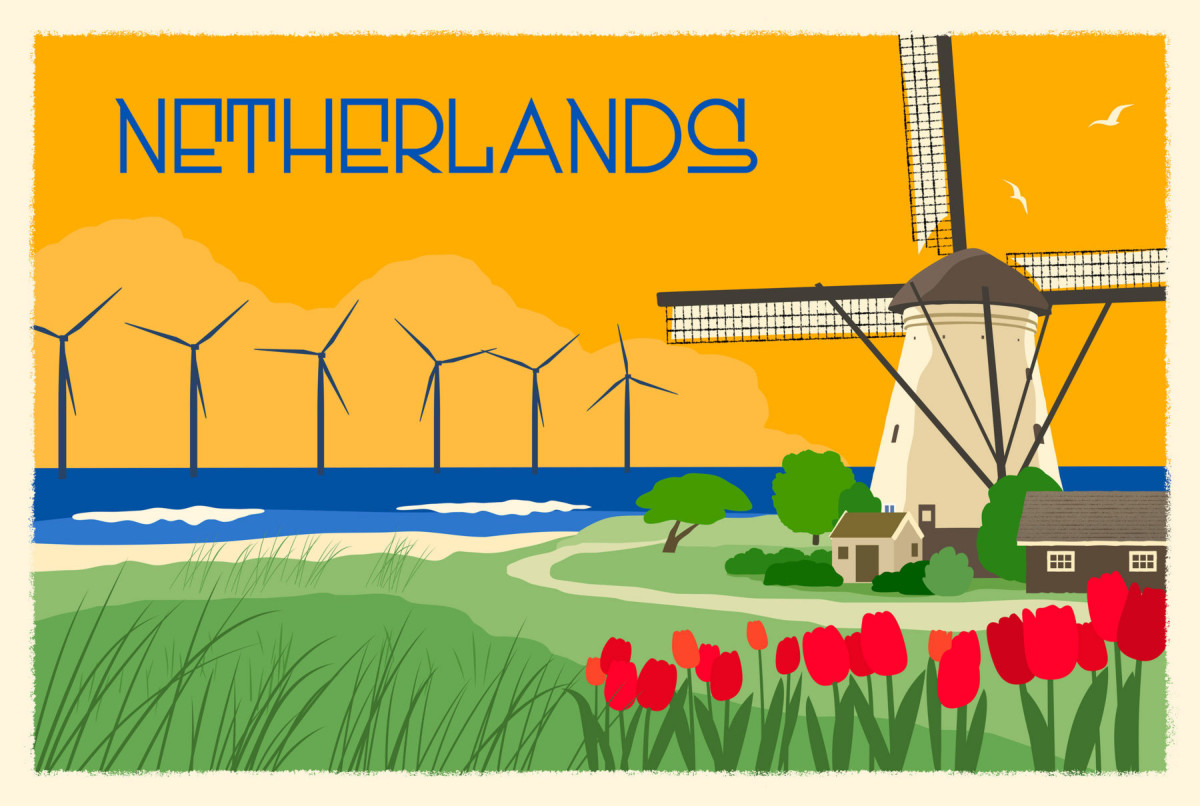 Relations between the Netherlands and China are often fraught with ideological differences, but climate change and the energy transition offer a rare spot for close and uncontroversial cooperation. In a country with half its territory below sea level, both the government and researchers strongly welcome China's recent commitment to carbon-neutrality by 2060. Given that the Netherlands is a pioneer in offshore wind, this technology is often seen as an obvious contender for joint projects to advance both climate protection and Dutch business interest, while China is keen to profit from Dutch expertise.

This report is part of the "Postcard from Europe" series about the cooperation between China and Europe in the fight against climate change. Contributors from various EU member states describe how this relationship is seen in their home country, and what impact it already has. The project is a collaboration between Clean Energy Wire and China Dialogue, a non-profit organisation dedicated to promoting a common understanding of China's environmental challenges.

In the Dutch public's mind, the issues of environmental protection in relation to China often conjure up photos of Chinese cityscapes shrouded in a thick haze of air pollution. “I think many people in the Netherlands view China as a polluter: they have images of big cities with a lot of smog in their head,” says Detlef van Vuuren, researcher at the government's Environmental Assessment Agency. But he points out that this view is one-sided. “From my perspective, China is both an innovator – they are currently the biggest investor in renewables – as well as a polluter, since they still heavily invest in coal technology as well.”

Earlier this year, China’s President Xi Jinping surprised many, including the Netherlands, with its pledge to reach carbon-neutrality by 2060. “The Netherlands welcome the announcement of Xi Jinping that China is tightening its climate ambitions and looks forward to the further translation of these ambitions into concrete plans,” said Nicolette Stoel, spokesperson of the Dutch Ministry of Foreign Affairs.

Louise van Schaik, senior research fellow at international affairs think tank Clingendael, said the announcement opened new opportunities for cooperation between the two countries. “The Netherlands looks critically at China, for example when it comes to the Uyghurs, the situation in Hong Kong and the country’s growing military power, but climate is seen as an exception,” van Schaik explained. “It’s almost a mantra: ‘At least the Chinese are doing well on climate.’ The question is: Is it possible in international politics to work together on one topic and not others?”

This juggling act between cooperation on the one hand and protecting the Dutch economy and values on the other, characterizes the Dutch government's China strategy published in 2018, which is aptly titled: ‘The Netherlands-China: A new balance.’ Though the Netherlands are eager to cooperate and trade with China with an eye on its huge market, the country is wary of China’s growing influence, and has concerns about security and human rights. “The government wants to cooperate with China on the basis of shared interests, while keeping an eye on ideological differences”, the Dutch Minister of Foreign Affairs, Stef Blok, wrote in a letter introducing the strategy.

Whether this is possible is not a question the Netherlands can answer alone. As the sixth largest economy of the European Union, the Netherlands often act within in the framework of the EU on big topics such as climate change and relations with China. The Netherlands prefer to hand these dossiers over to Brussels, simply because “the EU is a much bigger player”, van Schaik of think tank Clingendael explained. This strategy also applies to issues related to the energy transition. “We also don’t have that much to bring to the table when it comes to renewables, because we are ourselves lagging behind quite a bit,” van Schaik said.

In 2019, the Netherlands finalized its national climate agreement, with the goal of reaching the targets set during the 2015 Paris Agreement. According to the document, the country aims for a 49 percent emissions reduction by 2030 compared to 1990. But after EU leaders recently agreed to raise the bloc's emission-reduction target to at least 55 percent, the Netherlands will likely have to become more ambitious, too. In 2019, emissions were only down 18 per cent compared to 1990. “We have become a lot more ambitious since the climate agreement, but our story is peanuts in comparison to the German Energiewende, for example”, van Schaik said.

The Netherlands may have a lot to catch up on in terms of its own emission reduction, but it also has leading technological knowledge and innovation to offer. In particular, offshore wind power is often cited as an area allowing Chinese-Dutch cooperation. “The Netherlands is very good at the installation of offshore wind turbines, that is really our strong suit,” Arjen Schutten, head of the export association Holland Home of Wind Energy said. “There are several big Dutch companies that install turbines or provide hardware for the installation, and the Dutch research institute TNO delivers a lot of knowledge about wind energy to China.” One recent example of such an offshore installation is a project in the South Chinese Sea, about 26 kilometers from the city of Yangjang, where Dutch company SPT Offshore laid the foundations for a 300 megawatt windfarm.

The Chinese are mostly interested in innovative solutions and acquiring as much knowledge as possible, Schutten said. “The Dutch companies that are successful in China are the ones that are constantly innovating, so they are always one step ahead of the Chinese,” he said. China will take all the knowledge they can from foreign companies, he said, so they can eventually do everything themselves. “The Chinese dream is developing a prosperous state that is no longer dependent on other countries,” Schutten concluded.

In January, The Netherlands will host the Climate Adaptation Summit 2021, where leaders from 23 countries, including China, will meet to discuss strategies of adapting to the effects of climate change, such as droughts, heatwaves, and sea level rise. About 55 per cent of the Netherlands lies below sea level, making it one of the more vulnerable European countries when it comes to the rising tides. “The Netherlands hopes that China will participate at the highest level to strengthen the global leadership on adaptation”, Stoel of the Ministry of Foreign affairs said. “In addition, the Netherlands has an ongoing cooperation with China in the field of sustainability on themes such as water, smart and sustainable mobility, and circular economy.”