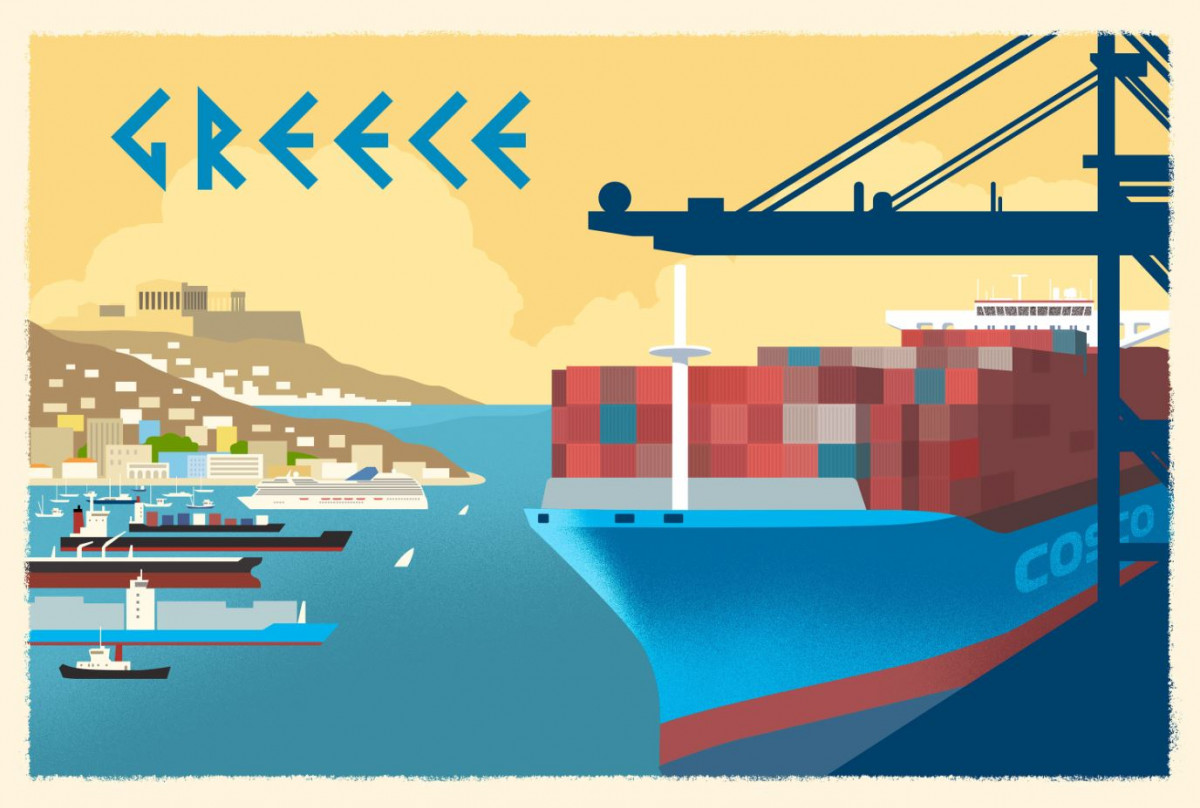 Illustration: Michael Crampton / China Dialogue
China's engagement in the Greek energy sector was mainly directed at Piraeus port and fossil fuel power, but this is shifting following Greece's setting of a coal phase out date. After years of lagging behind other European countries in transitioning away from fossil fuels, Greece took a major step in September 2019 when it committed to phase out coal power by 2028 as part of its effort to reach climate neutrality by 2050. Chinese investments in its clean energy sector will be key to getting there.

This report is the first in a "Postcard from Europe" series about the cooperation between China and Europe in the fight against climate change. Contributors from various EU member states describe how this relationship is seen in their home country, and what impact it already has. The project is a collaboration between Clean Energy Wire and China Dialogue, a non-profit organisation dedicated to promoting a common understanding of China's environmental challenges.

Since the two countries signed a strategic partnership treaty in 2006, Chinese investment has been growing in Greece. Much of it was initially directed towards technology and communications. Later the development of the Port of Piraeus became the flagship investment, after Chinese cargo company Cosco Shipping became the majority shareholder in the newly privatised port in 2016.

As Piraeus is a key entry point for Chinese goods into the European Union – an important gateway from Asia to Europe – that investment is likely to affect shipping and the port’s infrastructure for years to come. Cosco is moving ahead with an ambitious expansion of the port and its logistics capacities as part of a new master plan. Piraeus has already attracted the interest of global cargo and shipping giants, which have signed agreements with the new owners. But Cosco’s investments have been met with continuous demonstrations, strikes and complaints from locals who feel that the expansion is threatening their local market.

Following a tour of the Piraeus facilities during a two-day visit in November 2019, President Xi Jinping singled out energy as a crucial sector for future Chinese investment in Greece, in addition to transport and banking. Since then, renewable projects have been announced including a 50 MW solar plant in Crete, and a 995 million euro high-voltage transmission line to connect the island to the national grid.

Before September 2019, when Greek Prime Minister Kyriakos Mitsotakis unexpectedly announced the upcoming end of coal in Greece, China had been eyeing investments in coal plants.

Following deliberations in Beijing and Athens in 2016, Public Power Corporation, Greece’s largest electricity provider, had announced a joint venture with Chinese company CMEC to construct a new coal power plant in Western Macedonia, the region in the north of Greece that hosts most of its coal power plants. The project was only halted in 2017 because the European Commission ruled an auction must be held. In 2019, another Chinese company, Beijing Guohua Power, participated in auctions for the privatisation of several coal plants, which were later annulled.

But Greece’s decision to transition away from coal by 2028 has led to a radical shift in investment opportunities. (After 2023, only Ptolemaida V, a 650 MW plant that is under-construction, will still be operational, until 2028.)

Since the government’s decision on coal, Chinese companies and officials have declared their interest to invest in Just Transition projects in Western Macedonia, which align with Greece’s ambitious climate goals, according to Plamen Tonchev, head of the Asia Unit at the Institute of International Economic Relations in Athens. He expects China will now focus on “cleaner” energy investments.

One prominent example is an agreement signed by Greek and Chinese energy companies during Xi’s visit to construct a concentrated solar power project on the island of Crete.

China’s entry into Greece’s energy sector had started in 2016 with the acquisition by China’s State Grid Corporation of a 24% stake in ADMIE, Greece’s national transmission system operator. A year later, ADMIE signed a memorandum of cooperation with China Development Bank to secure funding to connect the island of Crete to the national grid.

“Until recently, this [ADMIE’s shares] was just an asset, it had not been used for any strategic investments” says Tonchev. But this is now changing. According to Tonchev, State Grid’s ambitious strategy is guided by a vision of an intercontinental electricity grid, in which China would be an “active stakeholder”. The idea, promoted as part of the Belt and Road Initiative, is China’s attempt to cater for the increased need for connectivity that would arise from the global transition towards renewable energy. Thus, the Ariadne project to connect Crete to Greece’s main grid with the first high-voltage direct current transmission line in the Mediterranean, is a strategically important investment.

The project’s primary purpose might not be to promote Greece’s transition towards clean energy, but it would partially serve that purpose. Many Greek islands, including Crete, are currently unconnected to the national grid, so they often rely on oil-fired plants, which account for 15% of the country’s power generation. Once an island is connected to the national grid, the local fossil fuel plants become obsolete.