Factsheet
Farming and land use emissions arise from a very diverse range of sources – milk cows, growing cereal, converting pastures into maize fields, producing fertiliser, driving tractors, draining moorlands, to name just a few. Other activities, such as using biomass in power plants or enlarging forests, take up CO2 and therefore benefit Germany's climate budget. This factsheet presents background and figures on German land use and forestry and the associated emissions.

Land use in Germany

Over half of Germany’s territory (51%) is used for farming purposes, some 30 percent is forested, and 14 percent is covered by settlements, industry and infrastructure such as roads and rails (2016).

Of the area actively used for agriculture, 71 percent is used as farmland to grow cereals, food crops, animal fodder and energy crops such as rapeseed. Some 14.2 million hectares are used for growing food for people. Permanent grassland (pastures) makes up 28 percent of agriculture land. The average farm size is 60.5 hectares.

Germany’s agricultural land is shrinking: Between 2000 and 2016, its size declined by 6,970 km2. This is mainly due to urban sprawl and new infrastructure but also due to the slightly growing forests. 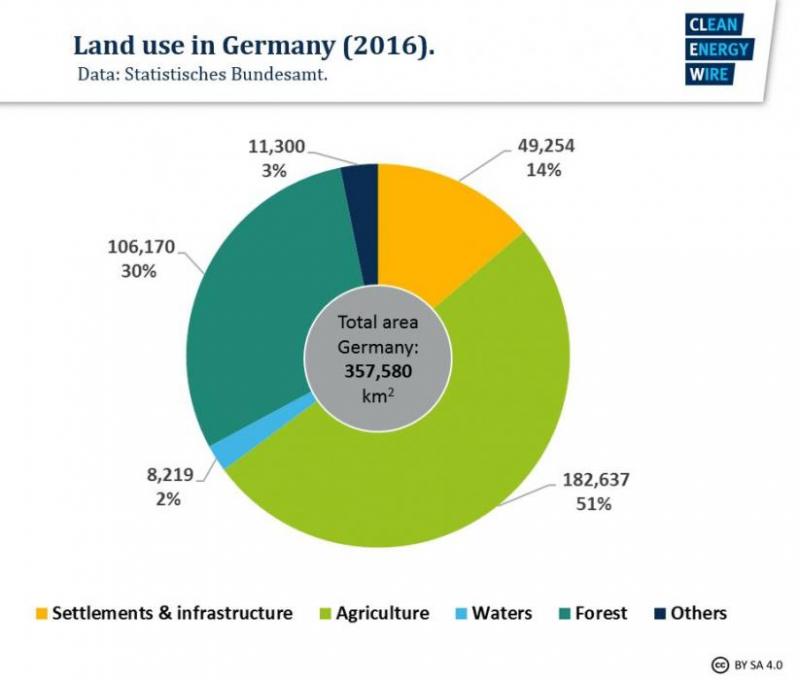 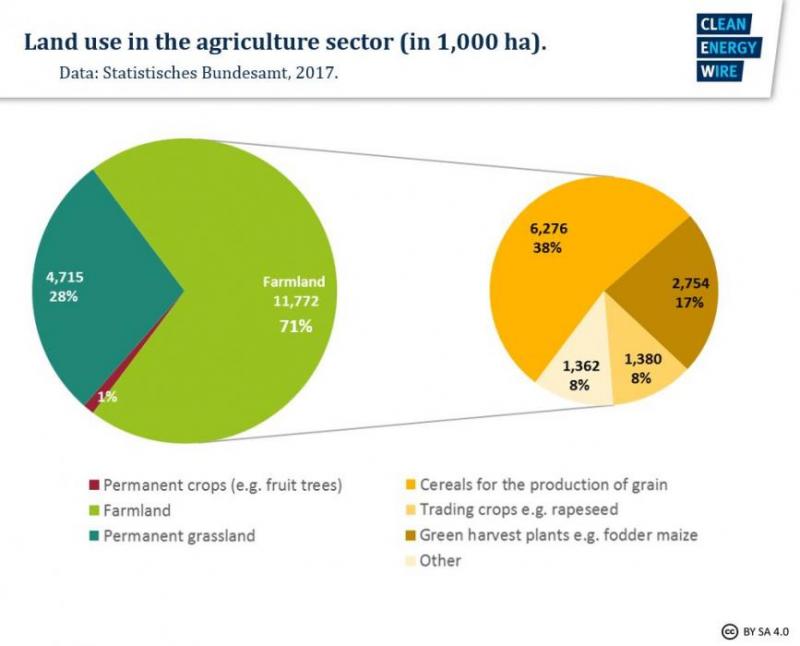 Info-Box: Types of greenhouse gas emissions from land use (agriculture)

Carbon dioxide (CO2): Occurs when grassland and moorlands are drained and turned into fields.

Ammonia (NH3) and NOx: Indirect source of nitrous oxide emissions: Ammonia (from fertiliser/manure) is a nitrogen compound that has adverse effects on biodiversity, waterbodies, and drinking water. Ammonia when turned into nitrous oxide is a climate gas.

Find data on CH4 and N2O and NOx emissions from the farming sector here.

Climate accounting in the farming, land use and forestry sector

The farming sector causes greenhouse gas emissions from various sources, among them animal husbandry, manure and fertiliser use and crop cultivation on arable land. In international climate reporting, these emissions are partially recorded in the category “agriculture” and partially under “land use and land use change and forestry” (LULUCF).

In Germany, greenhouse gas emissions from the agriculture sector amounted to 65 million tonnes CO2 equivalents in 2016, 26.4 million of which came from soils (mainly N2O). Under this “soils” category fall the application of animal manures, mineral fertilizers, digestate (from digestion of animal manures and energy crops) and sewage sludge, as well as emissions caused by grazing, cultivation of organic soils, and degradation of crop residues (See this report page 11). 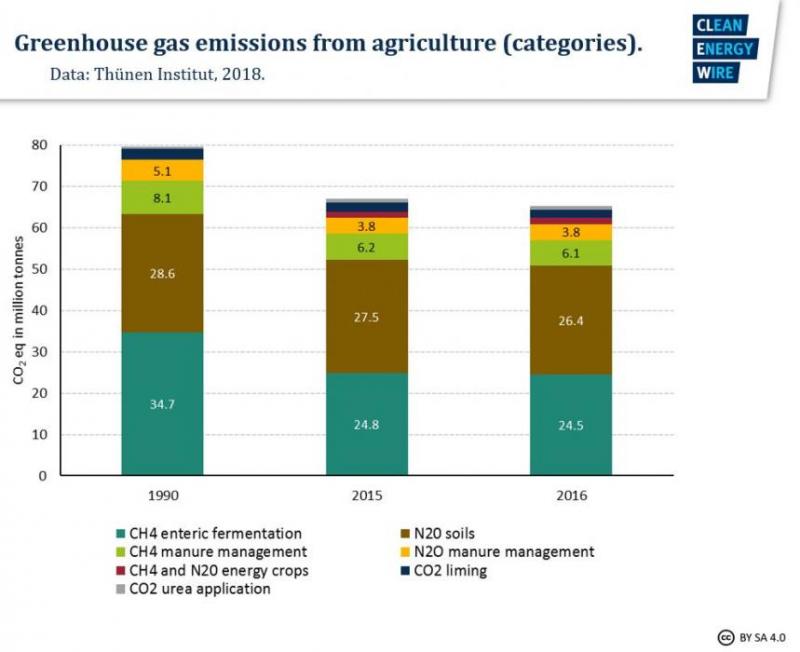 Another part of farming-related emissions fall under the category ofland use, land use change and forestry (LULUCF). Emissions from grassland amounted to 22.6 million tonnes CO2 equivalents in 2016. About 15.2 million tonnes were caused by cropland. Some 74 percent of these emissions occur from farming on moorlands (not including the N2O emissions mentioned above). More emissions arise when grassland or moorlands are turned into fields (land use change).

The emission budget for LULUCF in Germany is negative, meaning that this category is an overall sink that stores more greenhouse gas than it emits per year. In 2016, LULUCF stored around 14.5 million tonnes of CO2 equivalents. The biggest emitters of greenhouse gases (mainly methane) are croplands and grasslands, while forests are the biggest sink. 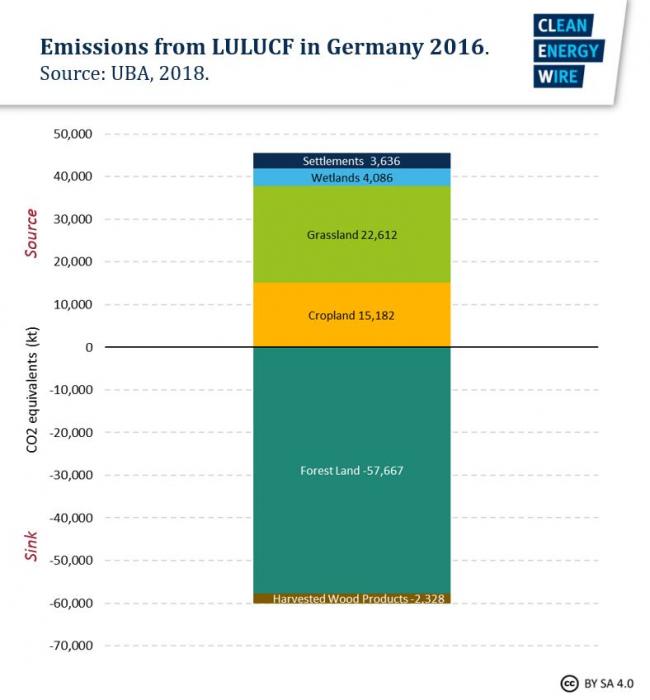 International greenhouse gas emission reporting uses the source principle. Therefore, greenhouse gas emissions originating from growing energy crops such as maize and rapeseed are counted towards the agriculture budget (or the LULUCF category, e.g. if grassland is converted into fields for maize) while CO2 savings due to the use of these crops for power or heat production or in transport, are attributed to the energy and mobility sectors. The same applies to the use of wood in construction, heat or electricity generation.

In international data sets, the use of power or fossil fuels in farming (mostly for heating, machinery and transport) are calculated in the energy and transport sector. The German Climate Action Plan 2050 however, includes energy-related emissions from farming in the agriculture sector.

Emissions from industrial processes related to the agriculture sector, e.g. the production of nitrogen fertiliser, are counted towards the industry sector.

The Scientific Advisory Board on Agricultural Policy, Food and Consumer Health Protection (WBAE) makes the distinction between direct land use change which occurs when grassland is turned into fields, thereby changing its ability to store CO2, and indirect land use change when increased cultivation of energy plants leads to turning forests or savannah into arable land somewhere else to compensate for the different use of the existing fields. Such indirect land use change can have negative climate impacts that are much higher than the gains (CO2 reduction) achievable by using energy crops, the scientists say. International indirect land use change is very difficult to measure and attribute to German energy and farming policy decisions.

Land use and land use change

The humus layer in grasslands stores carbon, which is thus removed from the atmosphere. Undisturbed or permanent grassland is a relevant carbon sink but ceases to be one if grassland is turned into arable land. In Germany the definition for “permanent grassland” refers to meadows and pastures that have not been used as arable land (i.e. for growing field crops such as cereals, maize, potatoes etc) for at least five years.

Since 1991 Germany has lost over 600,000 ha of grassland. The amount of arable land grew by 27 percent (80,543 ha) between 1990 and 2016, mainly by turning pastures into cropland. This is down to an increased demand in crops like maize and rapeseed which are used for both animal fodder and to produce bioenergy (biogas and biofuels). This has led to a rise in greenhouse gas emissions of 17.3 percent, the Federal Environment Agency (UBA) says.

Around 66 ha are used to build new houses or roads in Germany every day, which also contributes to grassland loss. 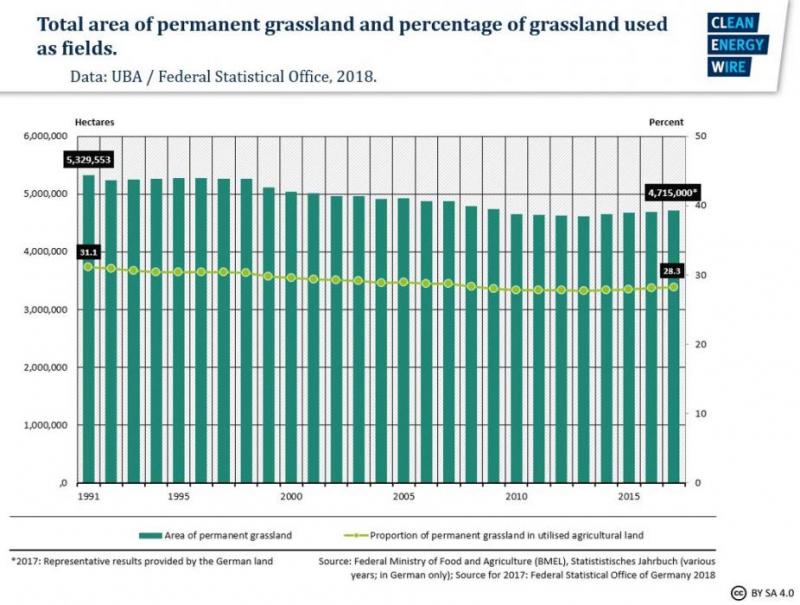 Peat soils, which cover about 4 percent of Germany, are its largest terrestrial carbon reservoir. They store between 1,300 and 2,400 million tonnes of carbon. A growing moorland takes up CO2 from the air and releases methane (CH4). Natural moors are largely climate neutral. However, if they are drained, oxygen enters the peat which leads to the release of CO2.

Ninety-five percent of Germany’s moor soils are drained, mainly for agriculture (50% grassland, 25-30% fields) and forestry (13%). Around 1.3 million ha of moorland is used for farming purposes in Germany. These drained peat soils make up five percent of the total farmable land but are responsible for 50 percent of greenhouse gas emissions from agricultural land use.

The government advisors at the WBAE suggest that the (partial) restoration of drained moorlands and the strict protection of existing peat soils would be one of the most effective measures to reduce emissions from Germany’s farming and LULUCF sectors. Between 7 million and 15.2 million tonnes of CO2 could be saved each year. However, several other effects – on biodiversity, endangered species and local water balance - have to be taken into account to make sure that there aren’t negative trade-offs between ecology and climate action. 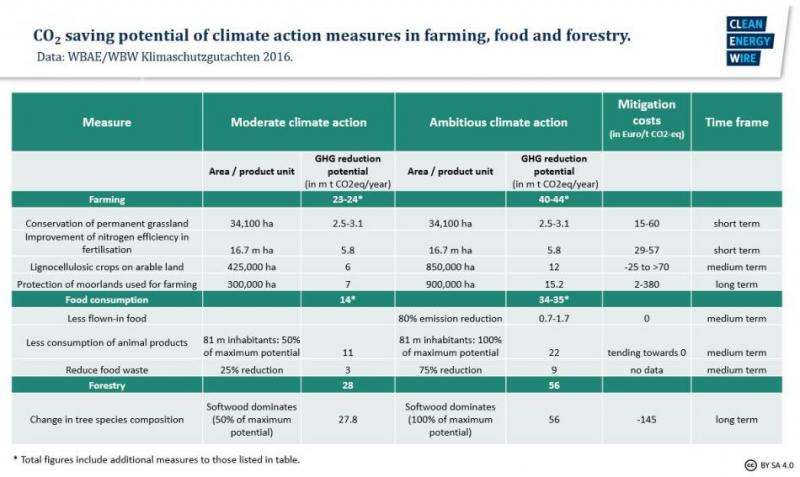 Often (permanent) grassland grows on peat soils. If water levels are raised considerably and permanently, they become useless to farmers. Whether or not a moor restoration is good for the climate, financially feasible and acceptable to citizens depends very much on local conditions, such as water supply, drainage, soil composition and legal structures, a 2015 study found.

In regions where a high share of pastures and cropland are located on peat soils, voluntary measures to give up land for restoration are unlikely to be effective or would have to be generously compensated, the WBAE concludes. It takes between 10 and 20 years until a restored moorland starts to become carbon neutral again.

One third of Germany is forested. In the past 40 years, Germany’s forests have grown by one million hectares.

Forest is the largest CO2 sink and responsible for the fact that the overall LULUCF budget is negative, i.e. more CO2 is stored in the system than emitted by it.

Forests in Germany currently store around 1,170 million tonnes of CO2.A sustainably run forest, with good species and tree age mixes, can maintain a constant CO2 sink in its biomass. When wood is removed from the forest, it continuous to store carbon if used as building material and furniture, which in Germany is more often the case for coniferous wood than hardwood (which is more often used to produce paper or heat (energy).

Changing the composition of Germany’s forests could make a large contribution to greenhouse gas reduction in the agriculture and LULUCF sector. Researchers at the WBAE have calculated that increasing the share of coniferous trees, especially douglas fir, could store more carbon than retaining the current mix of 44.5 percent hardwood and 55.5 percent coniferous trees (see table below). Coniferous tree species have the benefit of growing faster, thus storing more CO2 more quickly. However, such an increase would have to be combined with the ongoing measures to establish more mixed species forests which benefits ecology, biodiversity and resilience. 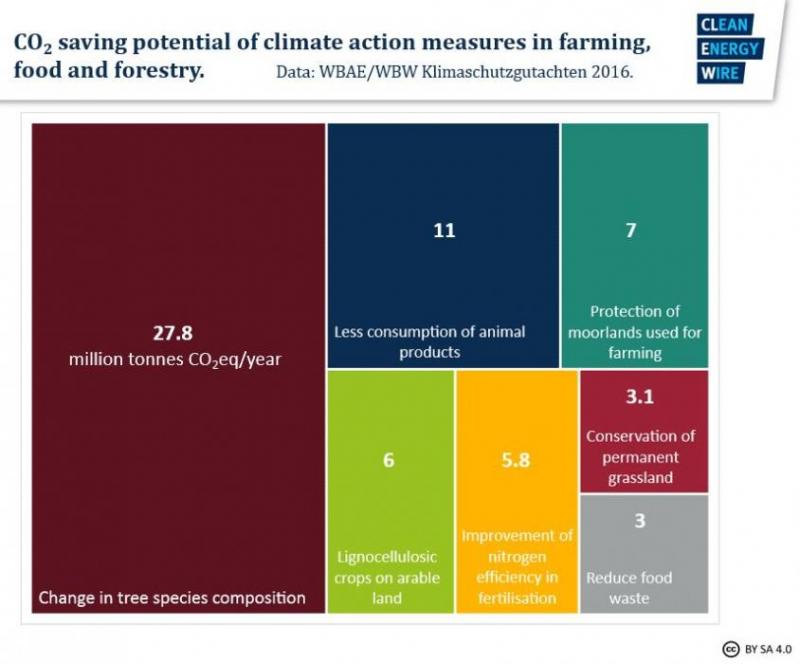 German forests are already suffering from the effects of a warming climate. Stronger winter storms combined with hot and dry summers have weakened spruce and pine forests in particular. One way to adapt forests to a changing climate is to increase tree species diversity and introduce more heterogeneous age structures.