Factsheet
The cabinet has approved a new Climate Action Programme with measures to reduce the country’s CO2 emissions. Economy and Energy Minister Sigmar Gabriel and Environment Minister Barbara Hendricks stressed that the country is now on track to meet its goal to reduce CO2 emissions by 2020 by 40 percent compared to 1990.

Coinciding with the start of the UN climate summit in Lima, Peru, the German government is implementing a plan to achieve its 2020 CO2 emission reduction targets. Germany has historically been known for taking the lead on climate change But the country is now set to miss its targets if more is not done to reduce carbon emissions, even though it has already made huge investments in renewable energy as part of its move to a green economy  (Energiewende).

The Climate Action Programme (CAP) spells out additional measures that are needed to meet targets, since Germany’s greenhouse gas emissions have risen over the last four years. With only current policies in place – including further development of renewables and combined heat and power generation, the European Emissions Trading Scheme (EU ETS) and boosting energy efficiency – Germany would fall short of a 40 percent reduction in CO2 emissions (compared to 1990) by at least 7 percentage points or 87 million tonnes. This is referred to as the “climate gap.”

Electricity sector will have to deliver

An increase in electricity generation from coal since 2009 has caused  greenhouse gas emissions to rise and put Germany off course on its CO2 emissions targets. The energy sector – which includes electricity generation from fossil fuel – is is currently responsible for the largest share of emissions - around 40% - and shows the “greatest economic and technological potential for lowering emissions,” according to the Climate Action Programme. Several studies have calculated that between 50 and 60 million tonnes of the 87 million in CO2 savings required must come from the energy sector - specifically, the power sector. 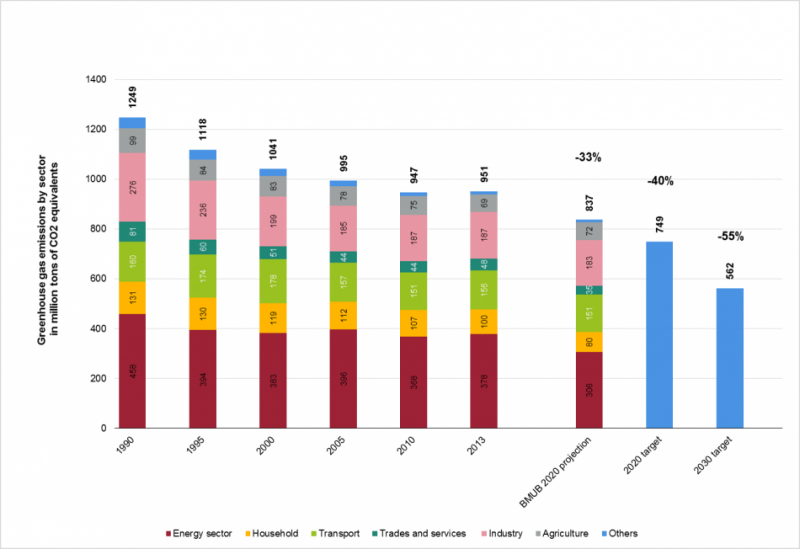 What the Climate Action Programme says

The CAP details the share of carbon emissions produced by each sector and possible measures to reduce emissions from each, adding up to a cut of 62-78 million tonnes. The economy and environment ministries claim this is enough to fill the "climate gap."

However, the programme does not always specify the exact amount of carbon emissions reductions expected from the various measures (e.g. the further development of renewables or the reform of the European Emissions Trading System, EU ETS), or how much they might cost. Because the investment required for measures such as introducing more LED lighting (saving an estimated 0.01 million tonnes) or the protection of marshland (saving up to 3.4 million tonnes) is not stated, it is unclear whether they offer value for money.

Additional measures in the power sector will amount to a reduction of 22 million tonnes of CO2, the CAP reads. This was the most debated and controversial part of the programme, with power suppliers, trade unions and politicians disagreeing over the role power station owners would play in the climate protection effort. Now the programme states that, "taking into account the power sector and the EU ETS, the Minister for Economic Affairs and Energy will submit a draft regulation on this in 2015."

A further measure aimed at the energy sector will see Germany push for timely reform of the EU emissions trading scheme (ETS), establishing a reserve of emissions allowances by 2017, aimed at keeping the market stable. CO2 allowances that the EU has been buying at auction to reduce surplus and create competition will then be placed in this "market stability reserve." This would counteract the effect that cutting emissions in Germany is expected to decrease demand (and prices) for allowances, in turn causing other EU countries to emit more CO2. Again, the the potential impact of these reforms on emissions is not detailed, as much depends on the final decision of the EU member states.

The biggest share of potential CO2 reductions specified – 25 to 30 million tonnes – comes from energy efficiency measures detailed in the National Action Plan for Energy Efficiency (Nationaler Aktionsplan Energieeffizienz, NAPE). Much of this is to be implemented through energy-saving renovation to buildings – which currently accounts for 40 percent of the country’s final energy consumption – funded through tax breaks and loans from the KfW development bank. 500 energy efficiency networks of between eight and 15 businesses with collective energy efficiency targets will be established.

Carbon emissions from the transport sector could be cut by an additional 7 to 10 million tonnes, the Climate Action Programme calculates, detailing a range of measures and their potential contribution (see table below). They include further expansion of the heavy vehicles toll, increased use of electric vehicles (1 million by 2020), climate-friendly public transport and more freight transportation by rail.

Trade, agriculture and others

3.6 million tonnes of CO2 could be saved in the agriculture  sector, with measures such as a new fertiliser law and an expansion of ecological farming.

The greenhouse-gas reductions achievable in the sector land use, land use change and forestry are listed in the programme (amounting to 2.5-5.4 million tonnes CO2) but are not included in the total reduction figure, as the sector does not count towards the national or European climate protection targets. 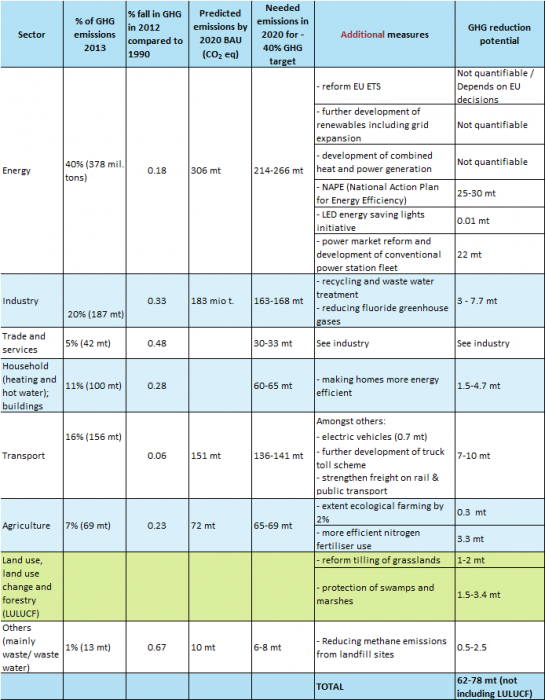