Factsheet
The government has agreed on a keenly awaited package of measures to further the Energiewende. But it gave in to pressure from trade unions and utilities and abandoned the idea of fining coal power plants for emitting greenhouse gases above a certain level. Instead, some plants will stop operating but be kept on reserve to fill gaps in power when renewables like sun and wind are in short supply. Germany's Social Democratic Minister for Energy, Sigmar Gabriel, said the governing coalition had reached "a historic agreement for new prosperity." He said that the government had "tied all loose ends of the energy transition together" and would make it irreversible. The Clean Energy Wire provides an overview of the main points of the agreement, reached in the early hours of 2 July. The government will start the legislative process to enact the plan this autumn, and most changes to regulation and laws are planned to be in place by early 2016.

Gabriel initially proposed that particularly dirty and old coal power plants would have to pay for extra emission certificates. This would have helped Germany reach its goal of reducing greenhouse gas emissions by 40 percent by 2020 over 1990 levels. Opposition, mainly from trade unions representing employees of the lignite power industry, forced the government to look for an alternative. Now, part of the necessary reductions will come from placing lignite power plants with a capacity of 2.7 gigawatts (GW) in a so-called capacity reserve, a backup for the power market in times of need. After four years in the reserve, the lignite power stations will be shut down. Electricity consumers will pay the bill for this reserve, which will be introduced gradually starting in 2017. But the government paper remains vague on the details of this deal for lignite. In particular, the payments are likely to prove controversial depending on the contract structure. Generally, the proposal states that not only operating costs will be covered, but also investment depreciation.
On the one hand, the agreement promises substantial support. On the other hand, the government admits that the programme could run into difficulties at the European level. State aid to specific industries is generally considered illegal by the European Commission in Brussels, but exemptions are possible under certain circumstances.
What is more, the measure will make up just over half of the 22 million tonnes in emissions cuts required per year. The other half will come from an array of smaller measures, mostly incentives to invest in efficiency measures, for example more effective use of heat in industrial processes. Financial support for small-scale solar heating will be doubled. Germany’s state-owned railway company Deutsche Bahn is supposed to come up with one million tonnes of savings. Overall, the cost of these measure is projected to amount to 1.16 billion euros per year. Had Gabriel stuck to his plan to reduce emissions by means of a levy, the gap to be filled would have been smaller and the measures would have added up to only 420 million euros.
Also, an additional contribution from the lignite industry will be factored in with 1.5 million tonnes. How this will be done has not yet been decided. Gabriel stressed that the agreement is still a success in terms of the Energiewende, initiating the long-term exit from coal power production. "For the first time in Germany, 13 percent of lignite plants will be mothballed," he said. However, reactions from many environmental support groups are negative (see the CLEW article about reactions to the agreement). 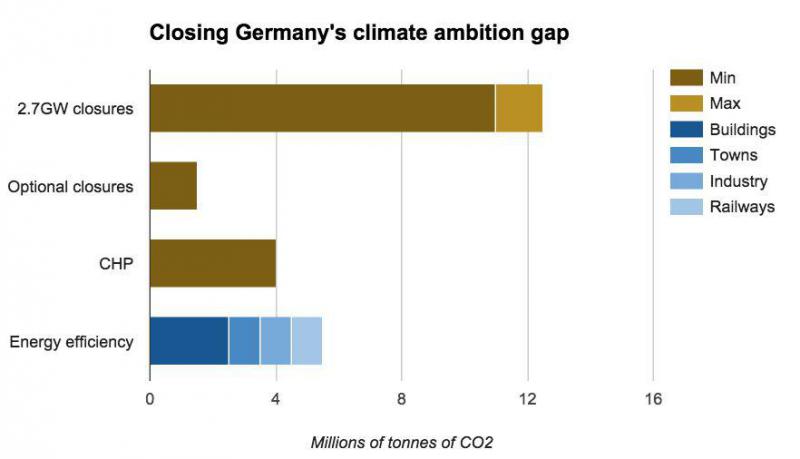 Germany will not introduce a market-based capacity mechanism to subsidise the conventional power station fleet, the coalition has decided. There will only be a capacity reserve (including the above mentioned lignite power stations) which helps out at times of potential market failure and undersupply of electricity across Germany. Instead of a capacity market, which has recently been introduced in France and the UK, the energy market will be reformed in a package called "power market 2.0". This mainly centers around "competition for flexibility options", meaning that companies should be given an incentive to invest in measures that buffer electricity production from sources that are sometimes in short supply, such as wind and sun. Contributions are expected from both the supply and demand side. Currently, the German market, apart from regional scarcity, has an oversupply of power capacity. However, eventually, this will change as nuclear power is phased out by 2022 and old power plants leave the market. The German government thinks that investment signals will come from high power prices and plans to ensure that these are not distorted. In the agreement, it pledges that neither politics nor regulators will interfere with prices and support this by legislation.
Another crucial part of the reform will be to make sure distributors of power buy enough energy to make promised deliveries to their customers. Generally, tightening the rules should give an incentive to hedge positions early and thus support investment in new generation capacity, according to the paper. “Whoever has not bought sufficient electricity will have to bear the costs to fill the gap. This can be a high cost in times of scarcity”, reads the paper. Germany also wants to make sure that connections to neighbouring countries do not distort the market, but help it. The government proposal mentions an agreement signed on 8 June with 11 neighbouring countries that governments will not interfere in markets even at times of high power prices.

Cogeneration of heat and power

Four million tonnes of the planned emissions reduction will come from expanding the cogeneration of heat and power. Even though the government target for cogeneration's share has been reduced, there will be additional financial incentives to invest. The maximum government support will rise from 750 million to 1.5 billion euros per year.

The political row in the coalition about extending Germany's electricity grid (mostly connecting the windy north to the consumption-heavy south) has apparently been settled. The CSU, the Bavarian conservative party, had opposed plans to build two of the three main electricity corridors across its territory. Most importantly, the coalition green-lighted the extensive use of underground cables instead of overhead power lines. "The additional cost is justified, because it will raise acceptance," reads the agreement. Also, the coalition agreed on details about the two lines that connect to Bavaria, specifying that some of them will be built on existing power grid corridors, while others will circumvent controversial areas.

The operators of nuclear power plants hold provisions of nearly 38 billion euros to pay for the decommissioning and clean-up after stations go offline. The coalition reaffirmed that it will run a stress-test for these funds, testing if they are sufficient and available when needed. Results are being expected by the end of September.