Factsheet
Germany has passed legislation to end coal-fired power generation by 2038 at the latest and agreed on a shutdown schedule for individual lignite power plants as well as compensation payments for operators. For hard coal, meanwhile, the coal exit law foresees auctions for plant operators to take capacity off the grid according to the government's timetable. (UPDATES Parliament adopts coal exit law on 3 July 2020)

The German parliament adopted the country's coal exit law in July 2020, 18 monthas after the multi-stakeholder coal exit commission recommended an end to coal-fired power generation in the country by 2038 at the very latest.

The coal exit law sets out the roadmap for shutting down the country's remaining coal power capacity, clearly distinguishing between the pathways for lignite and hard coal. A lignite phase-out has greater effect on mining regions and workers than a hard coal phase-out. Germany’s last hard coal mine closed in 2018.

It also settles compensation claims by coal plant operators and paves the way for economic support programmes in coal regions worth 40 billion euros.

What is the general timetable?

The coal exit law serves to spell out in detail the step-by-step reduction and end of electricity production using coal in Germany. It follows the coal exit commission's recommendations from 2019 and states how much coal power generation capacity will remain in the German power market at future dates. The exit will happen in three stages:

The coal exit law prescribes equal annual reductions of lignite and hard coal capacity combined. Thus, in years in which a smaller amount of lignite capacity is set to go offline (as agreed in the lignite phase-out schedule), more hard coal plants will be shut down and vice versa. 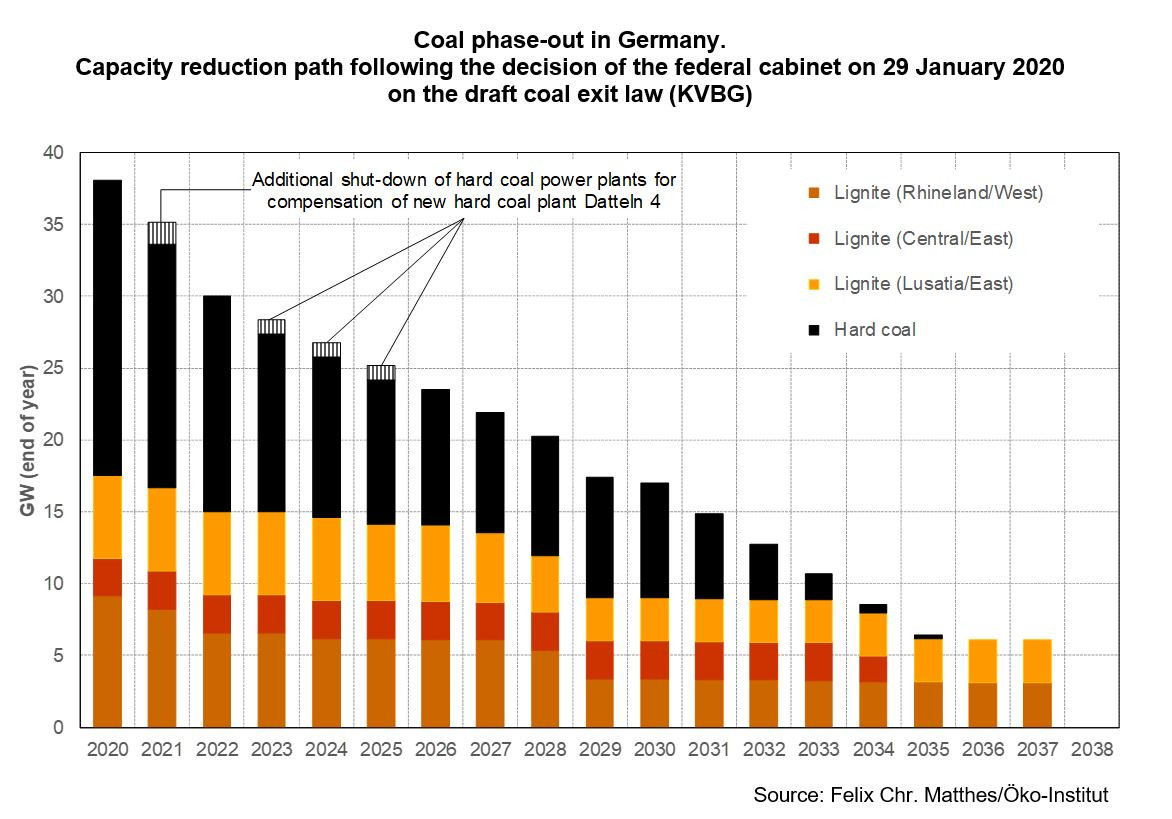 How will the capacity reductions be achieved?

In January 2020 and after months of talks, the federal government announced it had found an agreement with coal operators and premiers of the affected states.

The shutdown schedule for the country's lignite plants will be set down in contracts with lignite operators RWE, LEAG (EPH), Uniper and EnBW. The phase-out will start in western Germany to dampen the effects in economically weaker eastern German mining districts.

From 2021 to the end of 2022, RWE is solely responsible for the shutdowns and will take almost 3 GW in the Rhenish coal mining region offline.

The government also said it would follow the coal commission’s recommendation to assess in 2026, 2029 and 2032 whether the shutdowns planned for post-2030 could take place sooner to allow for a coal phase-out by 2035.

It added that the phase-out schedule allows the country to keep the embattled Hambach forest, which was slated for clearing to make room for an extension of a lignite mine. 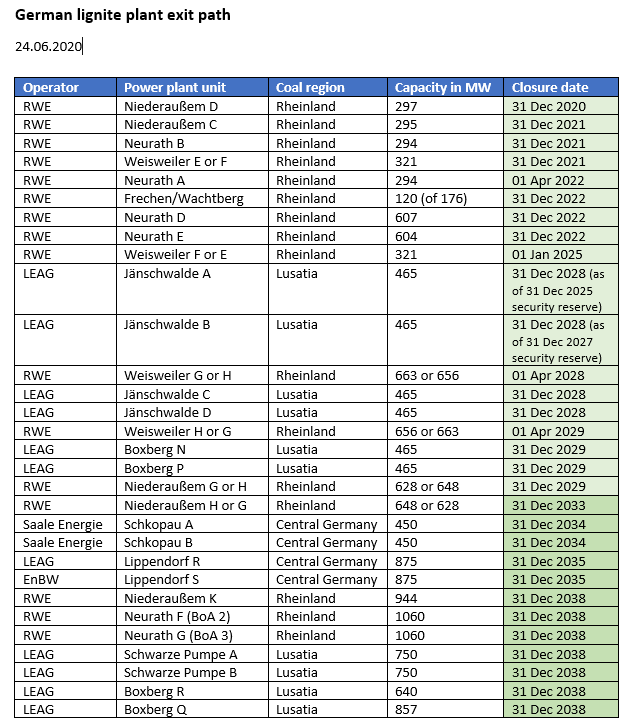 The coal exit law stipulates that a total of 4.35 billion euros in compensation will be paid for the planned shutdowns by 2030. Western German power company RWE will receive 2.6 billion euros for shutting down its plants by the end of 2029. 1.75 billion euros will go to operations in the eastern German district Lusatia, run by the Lausitz Energie Kraftwerk AG (LEAG). Part of the money will not go to LEAG itself but to a trustee confirmed by the government. The compensation does not change in case the operators shut down plants earlier than planned.

In addition, the government would introduce adaptation payments for older workers in lignite mines and hard coal and lignite power plants who lose their jobs due to the coal exit plans. These would amount to a maximum total of 5 billion euros by 2048, according to the coal exit draft law. 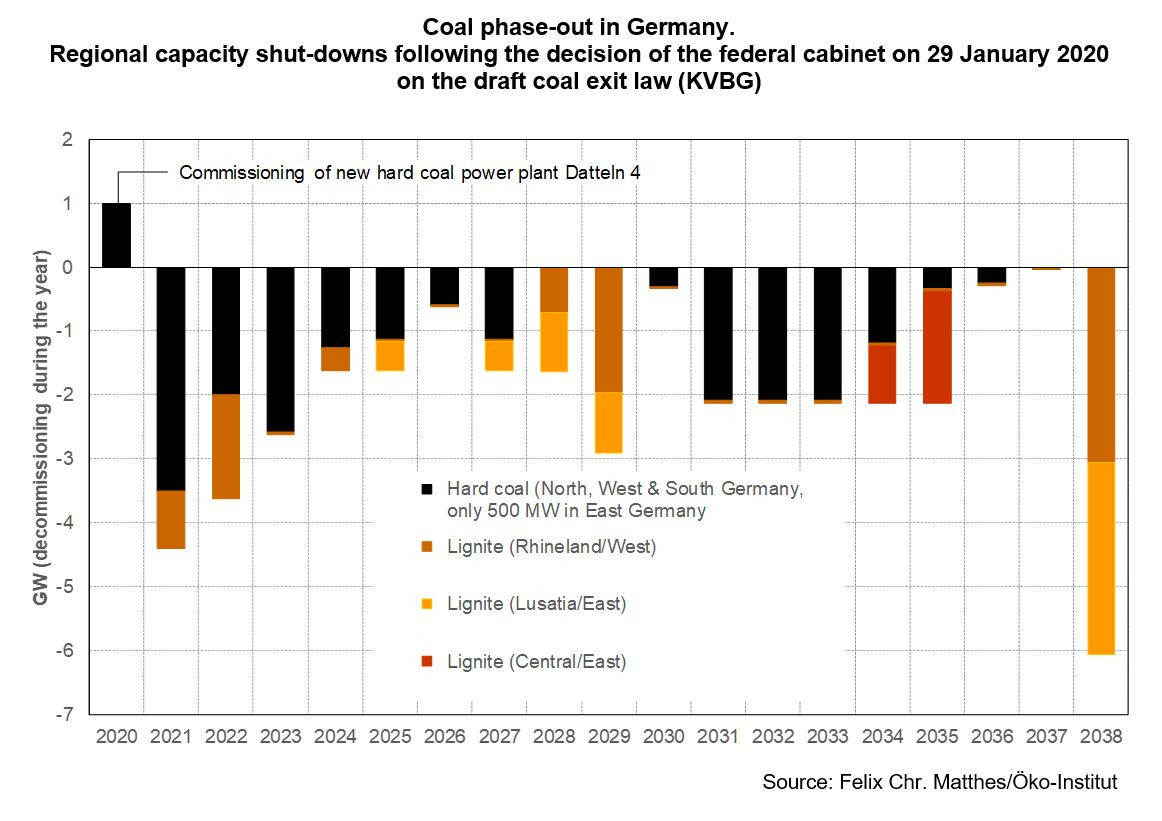 The government approved draft law from 30 June 2020 states that the hard coal capacity reductions will be implemented using auctions organised by the Federal Network Agency (BNetzA) until 2027. In these auctions, coal plant operators can tender capacity volumes to be taken offline, and how much money they demand for the closure. The coal plant operators receive a “hard coal premium” for the capacity they take offline.

The January draft says that the “degressive design of the maximum price creates an incentive for operators of hard coal plants to participate in the tendering process at an early stage”. If for any reason enough hard coal plants are offline to reach annual capacity reduction targets, then the planned auction will not take place.

In the first auction, hard coal plants in southern Germany (the so-called “Südregion”) will not be eligible to participate. These might be critical for grid stability in the event that power line expansion has not sufficiently progressed.

Should the auctions in 2022 and 2023 (to take capacity off the grid by 2024-2026) not yield enough successful bids, the draft stipulates forced shutdowns, largely by age of the hard coal plants. For the years 2027-38, the draft foresees forced shutdowns. The BNetzA draws up a list of plants to be shut down for each year, largely according to the year when they first came online.

Ban of new coal plants - with one exception

The law prohibits putting new hard coal or lignite power plants into service, unless an immission permit has already been granted by the time the law enters into force.

Cancellation of allowances in the EU Emissions Trading System (ETS)

As Germany phases out coal, the demand for emission allowances in the EU’s Emission Trading System (EU ETS) will fall. To avoid that the emissions reduced under the coal exit will simply be used elsewhere in Europe due to freed-up allowances, the German government plans to cancel a certain amount.

The draft legislation includes an amendment to Germany's emissions trading law, which translates the ETS into national provisions. The draft stipulates that the German government will cancel the amount of EU Emissions Trading System (ETS) allowances corresponding to the additional emissions reductions caused by the shutdown of coal power capacities, “insofar as it is not withdrawn from the market through the Market Stability Reserve” (MSR). The MSR was introduced in 2019. It is a complex mechanism to take excess carbon allowances out of the market, and the exact details regarding how many allowances Germany will cancel in addition is not yet clear.

At least two independent reports, in which the economy ministry and finance ministry will participate, will determine whether and how many allowances will be cancelled. The German government will notify the European Commission in the calendar year after the plant shutdowns, and Germany will have less allowances to auction in the year after that, states an explanation annexed in the draft.

As part of the legislative package, the cabinet also aims to amend the combined heat and power (CHP) law. This will change rules regarding the so-called “coal replacement bonus”. In the future, plant operators who replace an existing CHP – or cogeneration – plant that generates electricity from lignite or hard coal with one that generates electricity from waste, waste heat, biomass or gaseous or liquid fuels will receive a one-off payment of between 5 and 390 euro per kilowatt of capacity, depending on their start of operation.

The draft also introduces a bonus for “innovative CHP facilities”. These are particularly energy-efficient and low-emission systems, which produce or convert heat and electricity by using a high share of heat from renewables.