Factsheet
Germany’s economy and energy ministry has set out its proposal for the future of the German power market in a white paper, which the cabinet is to take a decision on in October. The proposal is for an energy-only market, plus a capacity reserve for times when market forces fail to balance demand and supply. A capacity market is off the table. The white paper in general focusses on flexibility.

The expansion of green electricity production in Germany was for a long time treated as a more or less isolated endeavour. Now, the German government has initiated a complete overhaul of the conventional energy market to make it fit for the energy transition.

On 3 July, the Ministry of Economic Affairs and Energy published a white paper  outlining its intentions, listing a wide array of reforms to create a market that can accommodate the ever-increasing production of electricity from fluctuating sources like solar and wind power. The white paper states that “this decision will strongly influence the power market for decades”.

The most urgent task was to find a solution to the phenomenon that many fossil fuel power plants in Germany are being pushed out of the market by green energy – yet are needed at times of low renewable energy generation. The white paper confirmed what the government had indicated over the last months: It said no to the introduction of a capacity market. Such a market would have compensated owners of fossil fuel power plants for providing capacity – proponents likened it to a fire brigade that is payed whether or not it is called to an emergency.

France and the UK, among others, have recently introduced capacity mechanisms to deal with a dearth of investment in power plants. Germany has instead opted for a market-based approach. According to the white paper, a capacity mechanisms would lead to overcapacities and be too costly.

Most utilities do not agree with this and the German Association of Energy and Water Industries (BDEW) says that investors will not invest enough in such a market.

However, according to the paper the German government is convinced that an “energy market 2.0” will be enough to ensure security of supply. More concretely, it is supposed to be an extensive overhaul of almost all aspects of the electricity market. This entails a list of 20 aspects of legislation to be reformed. The central idea is that power prices will be allowed – even encouraged – to fluctuate freely, incentivising more flexibility in the whole electricity system in order to deal with fluctuating supply. It stresses in particular that competition between different flexibility options should be harnessed and that a market-based approach will lead to more innovation. “The power market 2.0 incentivises the cheapest option for the integration of renewable energy,” the paper says.

So, how will the German energy market be reformed? First of all, the government pledges in the white paper that investors can rely on price signals ranging freely. Proponents of capacity mechanisms have argued that Germany’s future governments will not accept price peaks and will interfere – and that this will be anticipated by investors who will in turn be reluctant to spend money on power plants. The Economics Ministry announces in the white paper that there will be a sort of “constitution for the power market” which states that the state will not intervene in price mechanisms. An agreement with Germany’s neighbours  will ensure that there is as little interference as possible from state intervention abroad. What is more, the Bundeskartellamt, Germany’s Federal Cartel Office, will clarify in a guide that high prices will not lead to an investigation.

Secondly, traders will be held financially responsible if they do not buy enough power for their customers in advance. Penalty payments of up to 20,000 euros per megawatt hour – roughly 500 times the average current power price – will have to be paid if they do not fulfil their obligations. This accountability for deliveries will also be short-term oriented, leaving fewer loopholes for short periods of scarcity. Holding the market responsible and thus giving an incentive to make sure there is enough energy produced is thus a key feature of the reform. 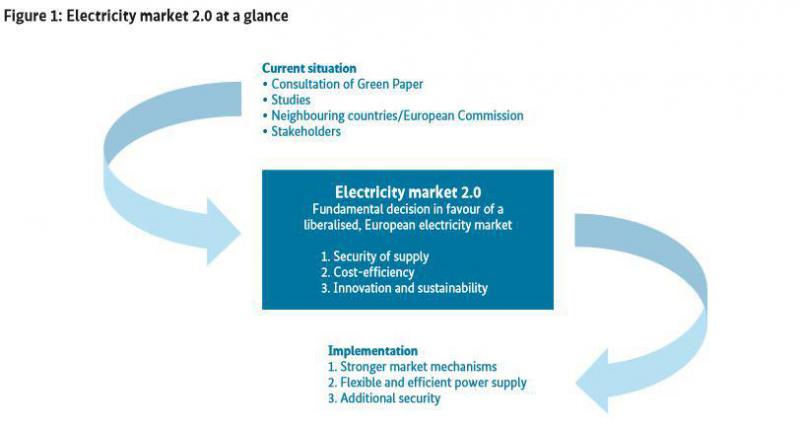 On the other hand, flexibility both in production and consumption will be strengthened. For example, the market for balancing power will be open to more players, for example large factories. At the moment, large industrial consumers have relatively little incentive to adjust their electricity intake according to price signals, for example because rebates on the energy price are based on long-term projections, but not the actual situation in the power market. A reform of grid tariffs should encourage them to react more strongly to scarcity or oversupply. Lowering the hurdles for market entry will also encourage aggregators for flexibility to be more active.

E-Mobility could also be a future contributor to flexibility. The white paper announces that price signals at charging points should reflect wholesale power prices. Smart meters in private housing will be introduced and standardisation should help the development of markets. New regulation of heat and electricity cogeneration will be introduced to encourage flexibility, too. An online platform and several standardised evaluations of crucial market developments, such as the monitoring of the minimum requirement of fossil power stations in the market, should provide greater transparency.

However, the government apparently does not completely trust the market to always balance supply and demand. A capacity reserve of 5 percent of peak consumption in Germany, about four gigawatts production capacity, will be kept ready to go into stand-by and jump in if the markets fail. Among these power plants will be the lignite plants with a capacity of 2.7 gigawatt, which are part of a government deal to meet emission targets without introducing a climate levy on old coal plants. But power stations in this reserve will not participate in the market during normal operations, because this would distort pricing in the market and discourage investment in regular capacity.

Even though many utilities favoured a capacity market, large majority of institutions that took part in the consultation process spoke in favour of a market-based reform, according to the energy ministry. However, many announcements in the white book might still prove to be controversial, and much of the detail is still to be agreed on through the legislative process. A first draft of the new energy market law will be agreed on by Angela Merkel’s cabinet in October, the ministry says. In early 2016, the reform should be completed and the law should take effect.