State premiers and the federal government have agreed on essential aspects of a reform of the Renewable Energy Act (EEG) to ensure that 40-45 percent of electricity consumption comes from renewables by 2025, according to a government press release. This is to streamline the renewables development and the needed grid infrastructure. “We have not reached a precise and final agreement, but the outlines and orientation points are clearly recognisable,” said Chancellor Angela Merkel at a press conference. In what economics minister Sigmar Gabriel said will constitute a “paradigm shift,” the state premiers agreed to the switch to competitive auctions for renewables support from 2017 on, instead of set feed-in tariffs. “Not the Bundestag will set the price in the future, but the market,” said Gabriel.
The governments also agreed on limiting new onshore wind capacity to about 2.8 gigawatts (GW) per year. Northern German states will have to restrict their development to about 60 percent of what they had built on average during the last three years, said Gabriel. This is to ensure fewer grid bottlenecks during peak wind power periods. There was no agreement on biomass development yet. The federal government cabinet is to decide on the reform plans on 8 June before the parliamentary process starts.

Read a Reuters article on the outcome of the meeting in English here.

See a CLEW factsheet on the EEG reform 2016 - switching from auctions to renewables.

“Quarrel over the grid”

The federal and state governments argue about what is responsible for bottlenecks in the German power grid, writes Michael Bauchmüller in Süddeutsche Zeitung. While the federal economics minister aims at slowing down renewables development to relieve the grid, state ministers blame large conventional power plants: “Put simple: The grids that we have today are congested with electricity from old lignite power plants,” said Green politician Franz Untersteller, energy minister of the state of Baden-Wuerttemberg.

“We ensure the financing of the nuclear phase-out”

The federal government cabinet today decided to implement the recommendations of the commission on the financing of the nuclear phase-out from 27 April, according to a press release by the Federal Ministry for Economic Affairs and Energy (BMWi). The commission had proposed to secure utility reserves for the nuclear exit and the permanent storage of nuclear waste by transferring them into a public fund. According to the press release, utilities can no longer try to avoid paying their share by spinning off nuclear activities.
The cabinet also approved opening up renewable auctions to other EU member states as well as a reform of investment rules for transmission grid operators, according to the press release.

E.ON shareholders will decide on the split-up of the company next week, and the cabinet decision is meant to ensure that the utility remains liable for its nuclear responsibilities, writes Michael Bauchmüller in Süddeutsche Zeitung. A law on the issue has been in the parliament for months but hasn’t been agreed to. “If E.ON shareholders agree to a split, […] there would be the risk of a legal vacuum,” Bauchmüller argues, adding that “without a clarification of the liability issue, tax payers might have to pay for E.ON’s nuclear legacy.”

“This has nothing to do with liquidation”

E.ON’s pending split has nothing to do with liquidation, company CEO Johannes Teyssen told business daily Handelsblatt. “E.ON is preparing for new growth with Uniper’s spin-off,” Teyssen said in an interview. He added that the proposal by the commission on the financing of the nuclear phase-out was generally successful. “It makes sense, is well thought through and creative.” He said E.ON was ready to compromise on the requested volume of the funds because investors had told him even an expensive solution was better than no solution at all.

Both radical technical innovations and political measures will be necessary to make air traffic climate neutral, according to European aircraft manufacturer Airbus and the Green Heinrich Böll Foundation. At a joint press conference at the opening of the Berlin Air Show, Airbus CEO Tom Enders called the agreed goal to reduce air traffic CO2 emissions by 75 percent by 2050 "extremely ambitious," but added that "we need very ambitious goals in this area." Enders said the integration of air traffic into the European emissions trading system (ETS) cannot be a solution as it would endanger European airlines' competitiveness, so a global system was needed.
Airbus and the Heinrich Böll Foundation have had a series of high level meetings on air traffic sustainability over the past two years. They said a relatively easy intermediate step to reduce air traffic emissions would be the standardisation of European airspace, which could lead to shorter flight routes and fuel savings of up to ten percent.

Germany is still the most attractive G20 country regarding investments in a low-carbon-energy infrastructure, but the gap between investments made and investments needed to reach the Paris Climate Agreement goals widens in all G20 states, according to a study by insurance company Allianz. “None of the G20 countries, even policy frontrunners such as Germany and the United Kingdom, are currently taking sufficient steps to combat the rising investment gap,” writes Allianz in a press release. The “Allianz Climate & Energy Monitor” ranks all G20 member states on their relative attractiveness for investment in a low-carbon-energy infrastructure, taking into account current and future investment needs in the sector in line with a 2°C global-warming trajectory.

Find the Allianz press release in English here and the full report here. 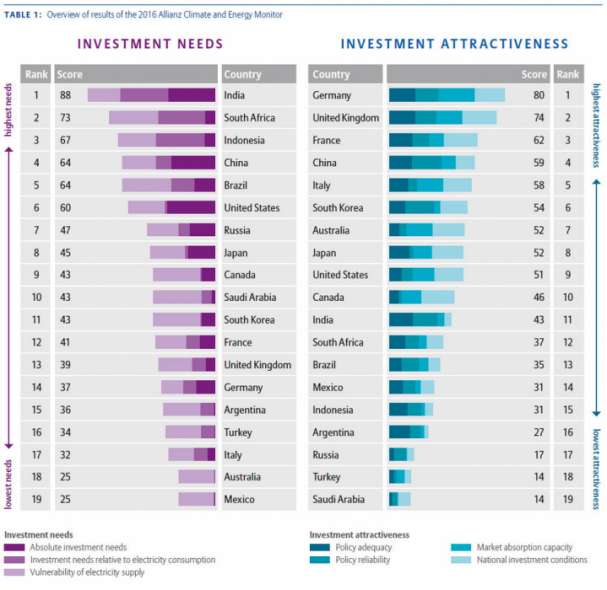 There is strong opposition by unions and politicians in some German states to federal environment minister Barbara Hendrick’s vision of a lignite phase-out as part of the ministry’s Climate Action Plan 2050, writes Westdeutsche Allgemeine Zeitung. For the reduction of greenhouse gas emissions, “all sectors must make feasible contributions,” said Social Democrat Garrelt Duin, economics minister of North Rhine-Westphalia, and rejected a discussion about when lignite power plants should be taken off the grid. Ministers from other states see “high risks for the business location” in Hendrick’s plan, writes Westdeutsche Allgemeine Zeitung.