German Advisory Council on the Environment

Complete coal exit in the next 20 years

The German Advisory Council on the Environment (SRU) is demanding a complete coal phase-out in Germany within the next two decades. The expert panel of seven university professors has published a statement saying that the upcoming legislative period will be the last opportunity for Germany to make sure it fulfils its climate targets under the Paris Agreement. To this end, the country should introduce a greenhouse gas budget under which coal-fired power stations would have a limited lifetime. By 2020 the most polluting power stations should be taken offline, the scientists write.

Environmental groups Germanwatch, WWF and Greenpeace welcomed the SRU suggestions and urged the government to follow them.

Find a press release and the complete statement in German here.

Energy data collector Fraunhofer ISE has updated its Energy Charts to illustrate the net electricity generation for public power supply in Germany in the first nine months of 2017. Renewables have a share of 37.5 percent. In the whole year of 2016 they made up 33.4 percent. The data does not include self-produced power of companies in the manufacturing and mining sector. 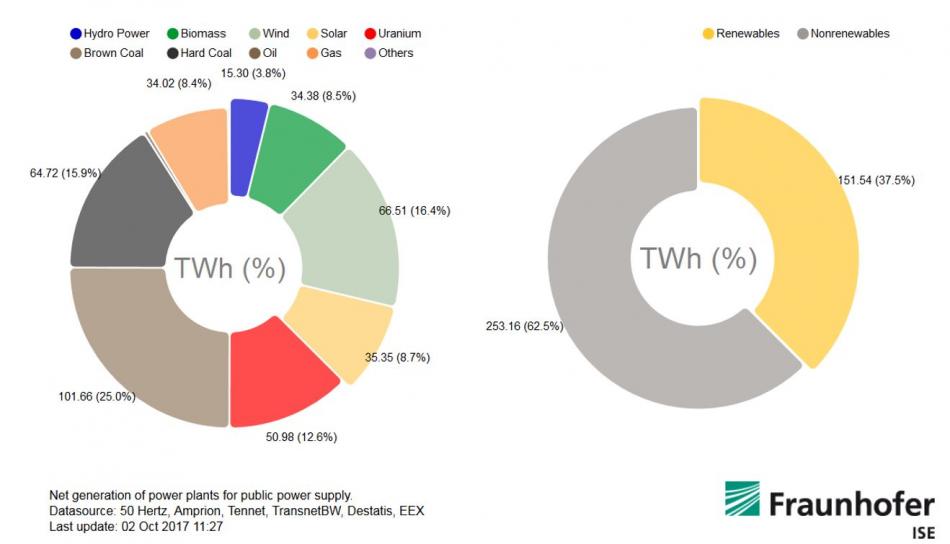 French President Emmanuel Macron’s suggestion of introducing a CO2 tax leading to a minimum price of 25-30 euros per tonne of CO2 is entering the debate between possible coalition partners in a new German government, writes Joachim Wille in the Frankfurter Rundschau. In Germany a CO2 price of 10 euros per tonne could make the power mix more climate friendly, a study from Energy Brainpool shows. If the price rises above 32 euros, gas-fired power stations would replace lignite power, Wille writes.

“The benefits of a climate tax”

A CO2 tax or European wide minimum price for CO2 emissions as suggested by French President Emmanuel Macron is worth thinking about, writes Andreas Mihm in the Frankfurter Allgemeine Zeitung. The current system is “inefficient, prone to lobby interests and because of this, all in all too expensive”, Mihm says. A minimum price of 25-30 euros per tonne of CO2 would disadvantage energy intensive German industries but it would be short sighted to dismiss Macron’s idea purely as a way to help French industry. The new German government will have to find a solution for a coal exit – a market based system like the CO2 price would be better than more regulations and state administered time frames.

“Tiny steps towards a coal exit”

Energy utility RWE has transferred two of its lignite-fired power station units in North-Rhine Westphalia into the so called emergency standby reserve. Four of eight coal station units have thus far been committed to the reserve, where they will remain for four years. Utilities receive 1.6 billion euros for this mothballing exercise, which requires them to have the stations at stand-by within a day should their extra power be needed, writes Andreas Mihm in the Frankfurter Allgemeine Zeitung. However, nobody anticipates that this will ever be the case as the German power market boasts large overcapacities.

Read a CLEW news piece on the lignite reserve here.

Revival of the geothermal sector in Germany

Small earth quakes, rising ground and arsenic water – the geothermal sector in Germany is often viewed with a lot of suspicion, writes Andreas Frey in the Frankfurter Allgemeine Sonntagszeitung. But despite lots of bad publicity, geothermal energy can help Germany in its transition to a renewable heating system and the city of Munich is pursuing this path by successfully using 17 geothermal boreholes.

16 months after joining forces, Siemens and Airbus are on the verge of presenting a market-ready small electric airplane, Axel Höpner and Jens Koenen report in Handelsblatt. By 2030, planes with a capacity of under 100 passengers could be flying with hybrid-engines, Airbus head Tom Enders said.

Read the article in German (behind paywall) here.

Various institutes, utilities and start-ups are testing all kinds of battery systems to find how renewable power can be stored in a future energy system that will no longer have any fossil power stations as back-up capacity, writes Holger Kroker in Welt am Sonntag. The researchers also want to find out which system is the most profitable when it comes to stabilising the power system.