COP23 - ‘We must use Bonn to push the national climate debate’ 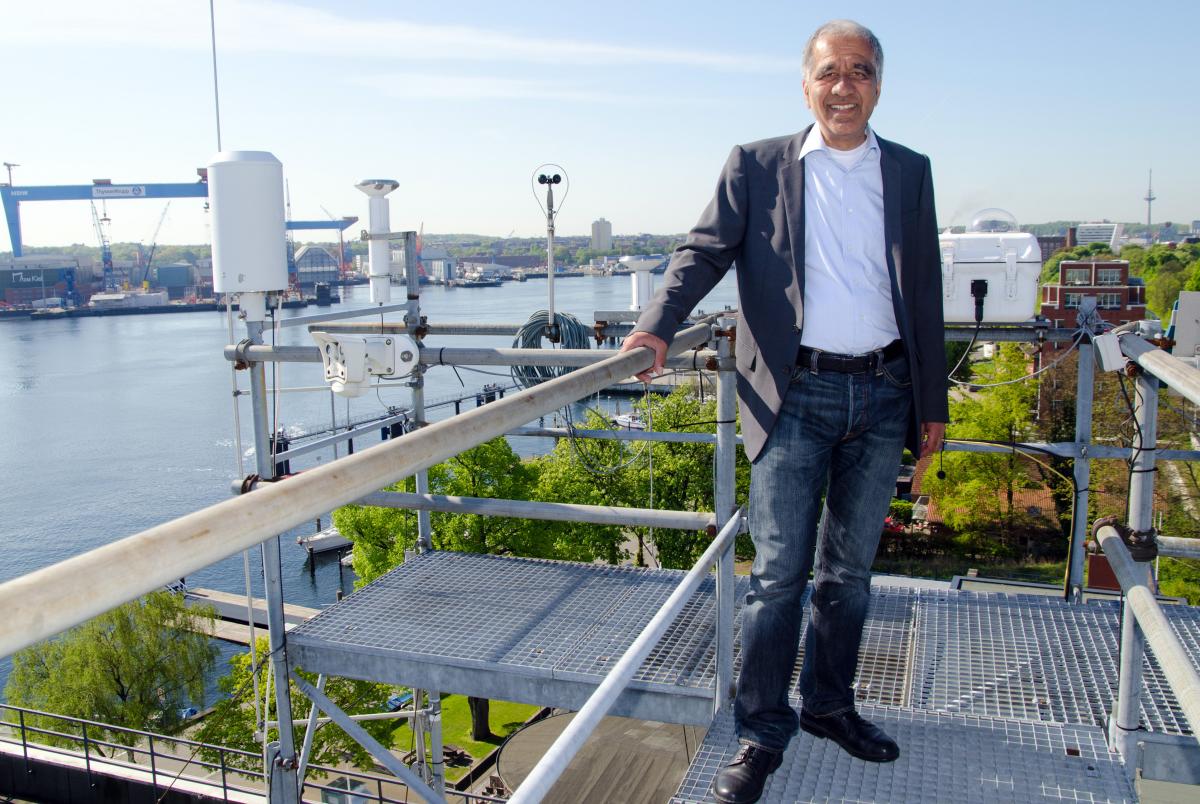 Prof. Dr. Mojib Latif, Head of the Research Division: Ocean Circulation and Climate Dynamics at GEOMAR Kiel. Photo: © Jan Steffen/Geomar.
Ahead of the climate summit in Bonn, Professor Mojib Latif, a leading climate scientist from the GEOMAR Helmholtz Centre for Ocean Research in Kiel, tells the Clean Energy Wire about his distrust in emission data, the unfortunate dominance of short-term interests in climate politics and how Germany will have to write off its 2020 climate goal.

CLEW: What would you consider to be a successful outcome of the negotiations in Bonn?

Mojib Latif: What we really need are specific and binding emissions reduction targets for individual countries that would enable us to achieve the Paris target of limiting global warming to well below 2 degrees Celsius. Countries have submitted voluntary self-obligations. But if you add these up, we will miss the target by far. This is why it would be wonderful if the countries could step up their ambitions. But this won’t happen at the COP23 in Bonn, which will not produce ground-breaking advances.
The conference will mainly deal with the details of the Paris Agreement’s implementation by defining standards that can be checked in some way. It will mainly be about technicalities, and we shouldn’t have high expectations. But the participating countries could at least reiterate their commitment to the Paris Agreement in order to demonstrate to the US that their commitment is solid.

To what extent can scientific findings advance climate protection? Will the Intergovernmental Panel on Climate Change’s (IPCC) special report “Global Warming of 1.5°C”, to be published in 2018, have a significant impact?

The mere fact that we have these climate summits, and that the issue reaches the top of the political agenda, is a success for the IPCC. The same is true for the fact that there is no longer any doubt that humans influence the climate – we can no longer pretend that climate change does not happen, even if someone like [US President Donald] Trump says he doubts it. The global community still stands behind climate science – including many Americans. Otherwise we would not have these climate conferences year after year. But, sadly, while we tend to talk a lot about climate change, we do far too little to stop it. At the end of the day, figures are what count, not beautiful words.

How reliable are the emission data that states have to submit to the UNFCCC?

The figures are quite unreliable. Like everywhere else, there is a lot of cheating. This is why I usually don’t pay that much attention to emission figures, even if they can provide some guidance. For me as a scientist, the amount of CO2 in the air and how that changes is much more important. That is the only really decisive figure for the climate. And, sadly, that amount increases each year.
This also shows clearly that it’s not enough to stabilise emissions. Any increase in emissions will add to the total. Even if we manage to make steep cuts, the CO2 concentration in the air would still rise, albeit at a much lower rate.
Moreover, the atmospheric CO2 content does not only depend on emissions, but also on the state of carbon sinks. Of all CO2 we release into the atmosphere, only about half stays in the air, while a quarter is absorbed by the oceans and another quarter is taken up by land plants. So a rise in CO2 concentration could also indicate that the Earth’s sinks become less effective – something we would expect to happen in the long run because of climate change.  But if the sinks become less effective, we will have to reduce emissions even more. This is why CO2 concentration is the most decisive figure in climate change mitigation.

Germany’s climate record is rather patchy. What changes are necessary under a new government to enable the country to meet the Paris Agreement requirements?

That’s true, we haven’t been able to reduce emissions significantly for about a decade. Some members of the German government even readily admit that we won’t be able to reach the self-imposed target of cutting emissions by 40 percent by 2020 relative to 1990 levels. We can basically write off that goal. This is why it is now crucial to focus on the next phase and make sure that we manage to cut emissions by 55 percent by 2030 as promised. We must do a lot more than previously assumed, and I very much hope that the Greens will hold their ground during the upcoming coalition talks so we can finally make some headway.
The key, obviously, is a coal exit. If we do not get down to it soon, we can forget all our climate protection targets, not only those for 2020. But I am afraid that the Greens cannot push through their demand to shut down the 20 dirtiest coal power plants. The [free-market] FDP will resist, because they always insist on so-called market instruments – basically, emissions trading. But that is a toothless tiger, because certificates are much too cheap. We will never be able to get rid of coal with emissions trading. On the contrary, this inadequate measure is one of the reasons why coal doesn’t go away.

What’s the significance of the COP for the climate debate in Germany? Will it push the debate forward?

We must use it to push it forward. The COP focuses public attention and I expect it to animate the discourse in Germany. That would be very important, because the summit takes place simultaneously with  coalition talks. Nevertheless, I remain skeptical that much progress will be made. There will be some sort of weak compromise in the coalition agreement. It will state that coal will have to be phased out by some non-binding target date in the future.

During previous COPs, fossil industry lobbyists allegedly enjoyed too much access to the negotiators. How much influence do these lobbyists have on climate policy in Germany and globally?

I don’t believe the influence of lobbyists during the COPs themselves is all that strong Of course, there are many lobbyists, but there are also many NGOs. Nevertheless, it’s true that lobbyists have a strong influence on crucial day-to-day politics. It’s very obvious in the case of the car industry: whenever the EU plans stricter emission limits, Mrs. Merkel intervenes.
Also, the main COP documents are negotiated well in advance. The summit will only put the finishing touches to the texts. Therefore, many COP summits also serve as ‘show events’, where politicians can demonstrate to the world that ‘we are dealing with the problem’. And many politicians really have good intentions.
As always, the underlying problem is the dominance of short-term interests, most of which undermine climate protection. That is the great tragedy, because climate protection is a long-term task. Especially in countries with high emissions, the consequences of climate change are not obvious yet, and will only become a serious threat in years or even decades to come. Accordingly, many people are under the impression that we can still wait a few years. But that often means waiting forever.