Elections & Politics Energiewende
Germany is likely to miss several of its energy transition goals by 2020, including greenhouse gas and energy consumption reduction, writes an expert commission tasked with monitoring the progress of the German Energiewende in a short interim evaluation. The paper was published just days after Germany’s future energy and climate policy proved, as expected, to become a major stumbling block to Chancellor Angela Merkel’s ongoing effort to form a government coalition of her conservatives, the Free Democrats, and the Green Party. The experts see the “greatest need for action” in the transport sector, and reiterate their call for a general price on carbon emissions.

Germany is well on track to successfully phase out nuclear power and increase the share of renewables in power and energy consumption to target levels, the independent commission says in the paper, whose aim is to “support the upcoming political discussions regarding the effective and efficient development of the energy transition”. However, the country has not made sufficient efforts to reduce primary energy consumption, or to reach its 2020 goal of reducing greenhouse gas emissions by 40 percent, it says.

Germany is furthest behind its targets in the transport sector, where the commission sees the “greatest need for action”. Future measures should not simply focus on alternative drives and more efficient engines, but should include an overall reduction in motor vehicle traffic, and modal shift to sustainable modes of transport.. Without such action, the 2020 goals would likely not be reached even by 2030. [Find out more about Germany’s greenhouse gas emissions and climate targets here]

The commission also renews its call for a general price on carbon emissions to retain the Energiewende’s credibility and to help the country come closer to reaching its 2020 and 2030 climate protection goals. The EU’s Emissions Trading System (EU ETS) was already a significant step, but it only concerned half of total emissions, and the low allocation price was not enough to drive coal-fired power plants out of the market. A national CO₂ price should include all emission sources, technologies, and sectors, the commission says.

The government has appointed four independent academic experts in energy and economic issues to annually assess the progress of the Energiewende, a dual shift from fossil fuel and nuclear power to a renewables-based energy system. In 2012, they released their first report, which took stock of the project and included advice on policy to reduce the country’s carbon emissions while simultaneously phasing out nuclear power production. The next full report is expected in December 2017.

The commission has now published what they call an “Energiewende traffic light” to show the progress of key target indicators. 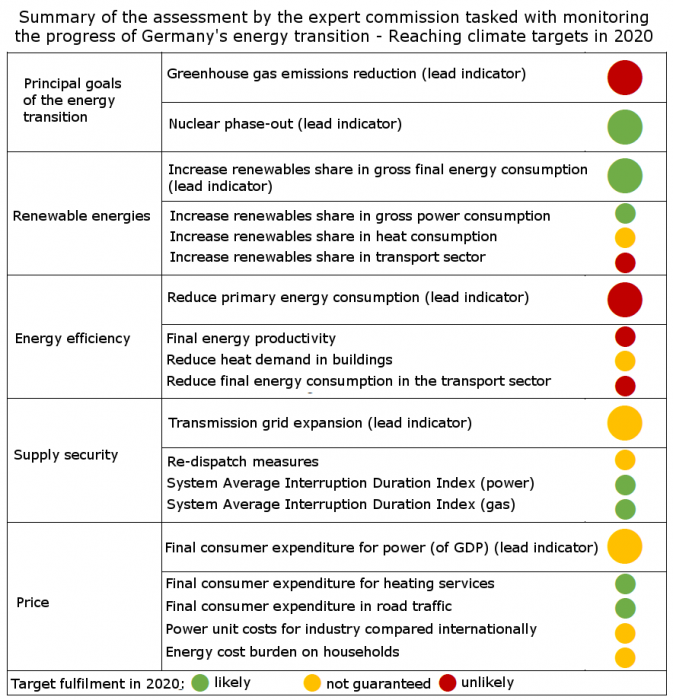 Input for coalition talks on climate and energy

The experts published the paper in the midst of what proves to be a very difficult task of forging a new government coalition of the CDU, the CSU, the FDP, and the Green Party. The ongoing exploratory talks are aimed at finding common ground for detailed negotiations that could lead to a coalition agreement.

All parties involved support Germany’s energy transition in general, but disagree over the speed and shape of its execution. The first round of talks dedicated to energy, climate, and environment-related issues got stuck over whether Germany “must” reach the existing national climate targets, or whether it should merely “try” to do so. An exit from coal-fired power generation, renewables support, and e-mobility are other controversial topics that the next government will have to tackle.

Merkel’s conservative CDU/CSU alliance has emphasised the importance of Germany’s industry, and is worried about jobs. The market-liberal FDP opposes extensive government regulation and bans, and wants to end renewables support under the Renewable Energy Act (EEG). The Green Party has said that it will not enter into a coalition that fails to identify climate protection as a clear priority. The Greens’ key campaign demands include a speedy coal exit and the phase-out of combustion engines.

Julia Verlinden, energy policy spokesperson for the Greens’ parliamentary group, said the commission’s evaluation showed that more had to be done to reach the 2020 climate targets and the long-term energy transition goals. An appropriate CO₂ price and significantly greater efforts in energy efficiency were some of the commission’s commendable proposals, she said.

In transport, “we need to think outside the regular box. Here, we need not only the electrification of individual transport, but also concepts to reduce traffic for modal shift”, Verlinden told the Clean Energy Wire.

It does not make sense to gauge the Energiewende’s success solely by looking at the year 2020, the experts say. They recommend extending the time horizon to 2030 for future monitoring reports. The German government’s Climate Action Plan 2050 has already set specific greenhouse gas reduction targets for individual sectors by the year 2030, but other key Energiewende monitoring goals have not yet been set for this period. 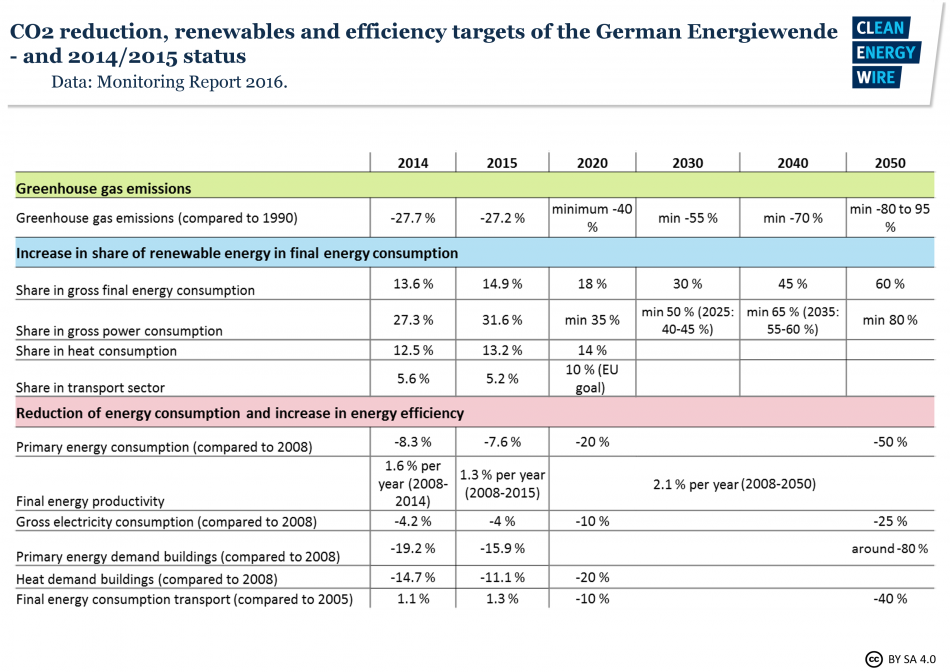 The experts also call on the government to analyse in-depth the external and domestic reasons behind the projected failure to meet certain targets. Future failures can be avoided only if these reasons are better understood, they argue.

Domestically, “more vigorous steps to reach Energiewende goals” have not been made, despite strong public support for the energy transition in general, the commission says. The implementation of the Paris Agreement would also increase pressure on energy prices on the global markets in the medium and long term. However, the fact that external factors might make reaching the Energiewende targets more difficult “must not lead to categorising national targets as too ambitious and cutting back the efforts to reach them”, the experts warn.