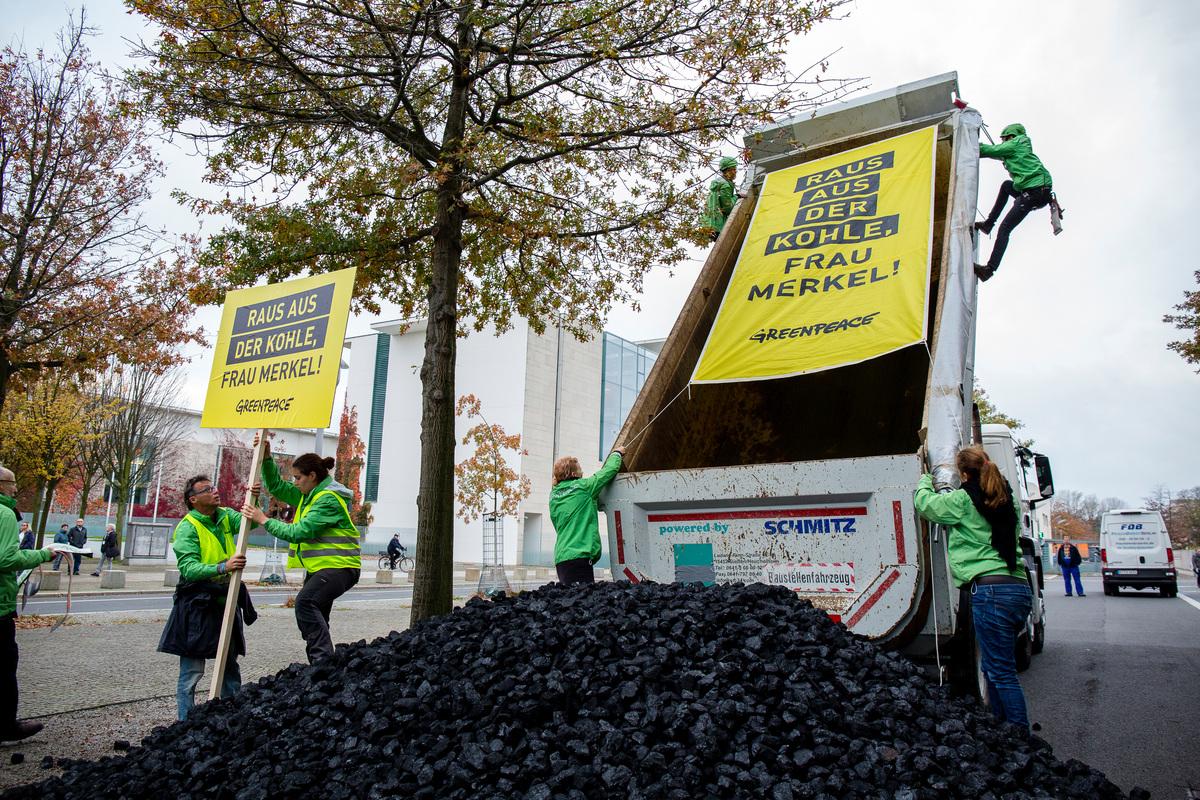 "Exit coal, Ms Merkel" - Greenpeace activists unload a truckload of coal in front of the German chancellery ahead of the coalition talks - (c) Jan Zappner/Greenpeace
Germany’s future energy and climate policy has proven the expected difficult issue in Chancellor Angela Merkel’s effort to form a government coalition of her conservatives, the Free Democrats, and the Green Party. According to media reports, in their first round of talks dedicated to energy, climate, and environment-related issues, the parties agreed that Germany should continue to aim for meeting the existing national and international climate targets for 2020, 2030, and 2050. [UPDATE with new details on climate targets in first paragraphs]

Merkel's conservative CDU/CSU block, the pro-business FDP and the Greens agreed to commit to the national and European goals as well as the global Paris climate agreement, Reuters and other German media reported. “We want to achieve the fulfilment of these targets and at the same time ensure the supply security and affordability of energy, and strengthen the competitiveness of the economy,” says an unpublished draft paper.

Yet the four parties disagreed over the interpretation, with a debate over the question whether Germany “must” reach the targets or whether the country should merely “try” to do so, reports Süddeutsche Zeitung. Representatives want to meet again next week to continue to talk about climate.

Recent calculations by the federal environment ministry have shown that Germany is set to widely miss its 2020 climate targets without drastic action. Emissions from coal-fired power plants make up about one third of the country's total greenhouse gases. Several energy experts say that Germany could cut its emissions significantly in the short term by closing its dirtiest lignite-fired power plants. This is a prominent Green Party demand.

“We thought that everyone had agreed to keep the climate targets,” said the Green parliamentary group co-head Katrin Göring-Eckhardt in a video after the talks.

“Of course, we had a hard debate and there was an endless back and forth. And we thought we had the agreement. But then, this was not the case. Then we had the feeling that one camp followed the motto 'we’ll see' and the other camp wanted to 'act now'. In this, we did not come to an agreement. Without a commitment to the climate targets […] we cannot continue to talk.”

The parties also failed to agree on any outline of how to achieve the goals in the exploratory talks, aimed at defining common ground for detailed negotiations of a coalition treaty. “For us, the main instruments to reach the targets are a coal exit, the transport transition and the agricultural transition. We all know that. We have to talk about these instruments,” said Göring-Eckhardt.

FDP general secretary Nicola Beer said that “within these targets, we need a restructuring of the Energiewende. We need other, market-economy instruments.”

Parties were “just as far away” from building a coalition as before, said Wolfgang Kubicki, deputy party head of the Free Democrats in a television debate. “In terms of content we have not advanced a single step.”

Several issues "where differences are very, very big" still needed to be talked about, said CDU general secretary Peter Tauber after the meeting. "There are issues where we come closer to one another, sometimes in a very emotional atmosphere, but also trying hard and being constructive."

In the wake of the general election in September, a weakened Merkel now faces the difficult task of forming a so-called ´Jamaica coalition´, dubbed this way because the colours of the parties involved - black (CDU/CSU), yellow (FDP), and green - mirror the Caribbean country’s flag.

The Energiewende will continue under Germany’s new government, as all parties to the talks support the ambition of steering the world’s fourth largest economy towards a low-carbon energy system. However, the political camps markedly disagree as to how the country’s CO2 footprint could and should be reduced. As a result, climate and energy policy have emerged as the biggest stumbling blocks to the four-party talks.

The four parties are currently in exploratory talks to find a common ground and to decide whether to enter into official negotiations about the details of government alliance. Merkel aims to wrap up these talks by mid-November, and it could well take until next year for the country to have a new government. [Find out more about the long process of building a government coalition in this CLEW factsheet]

The Green Party has said that it will not enter into a coalition that fails to identify climate protection as a clear priority. The Greens’ key campaign demands included a speedy coal exit and the phase-out of combustion engines. Merkel’s conservative CDU/CSU alliance has emphasised the importance of Germany’s industry and is worried about jobs. The market-liberal FDP opposes extensive government regulation and bans, and wants to end renewables support under the Renewable Energy Act (EEG). [Find further details in the CLEW factsheet Climate & energy stumbling blocks for Jamaica coalition talks]

“Those who commit to the 2020 climate target must also agree on concrete steps to reach this goal. The German climate target cannot be reached without a clear plan to shut down the dirtiest coal power plants”, commented Greenpeace Germany’s climate expert Karsten Smid after the first reports on the coalition talks were published.

Just hours ahead of the 26 October talks, Greenpeace had held a protest in front of the German chancellery in Berlin to renew the organisation's call for an exit from coal-fired power generation. Activists unloaded a truck full of lignite and held banners saying “Exit coal, Ms Merkel”.  The environmental NGO also published a paper that takes stock of the chancellor’s climate policy. There was a large gap between the standards in climate protection that Merkel proclaims on the international stage and the actual results of her policies at home, the organisation said. Merkel's long-standing effort to cut emissions has earned her the nickname "the climate chancellor".

Industry lobby groups, meanwhile, urge the parties to keep an eye on costs. “Businesses are very worried about the energy costs that continue to increase,” the Federation of German Industries (BDI) said in a release published before talks began. BDI warned that “emotions and ideology” had no place in the parties’ debates on energy and climate. The competitiveness of Germany as an industrial economy must be safeguarded, the organisation argues, and proposals such as a national price on CO₂ would shift production abroad. The BDI's climate and energy policy head, Carsten Rolle, told the Clean Energy Wire that debating climate targets was not enough. "We have to develop the right instruments," he said.

Sabre-rattling and a rocky start

The talks on 26 October were off to a rocky start after the participants had criticised each other for their differing interpretations of the barely two-days-old first working basis agreement on the budget and taxes. “There’s a lack of basic trust among the negotiators”, Wolfgang Kubicki of the FDP told the German public broadcaster ARD. “That’s the precondition for you to rely on what’s talked about, and that there are no differing interpretations ”, he added.

There was some sabre-rattling ahead of the meeting. The CDU’s climate and energy representative and Premier of Germany’s industrial heartland and lignite mining state North Rhine-Westphalia, Armin Laschet, told Rheinische Post that it would be easier to find an agreement on migration and asylum than on climate policy. Laschet emphasised the importance of conventional power for supply security reasons, and warned of shutting down lignite plants without a plan for the workers’ future. “Climate protection is important, but keeping jobs is also a moral goal. If Germany’s status as an industrial location is put in danger, we cannot form a coalition.”

As the country’s former capital, Bonn, will host the UN climate conference in November, Germany’s climate record will be under increased international scrutiny, which could influence the coalition talks. The Green Party’s climate spokesperson and member of the party’s negotiating team, Annalena Baerbock, told the Clean Energy Wire in an interview that the coalition talks in Berlin had to send a signal to the world that Germany was serious about reaching its emission reduction targets. For her party, the “COP can indeed be a tailwind in [the] coalition talks. And I will make sure that it is felt at the negotiating table”, said Baerbock.