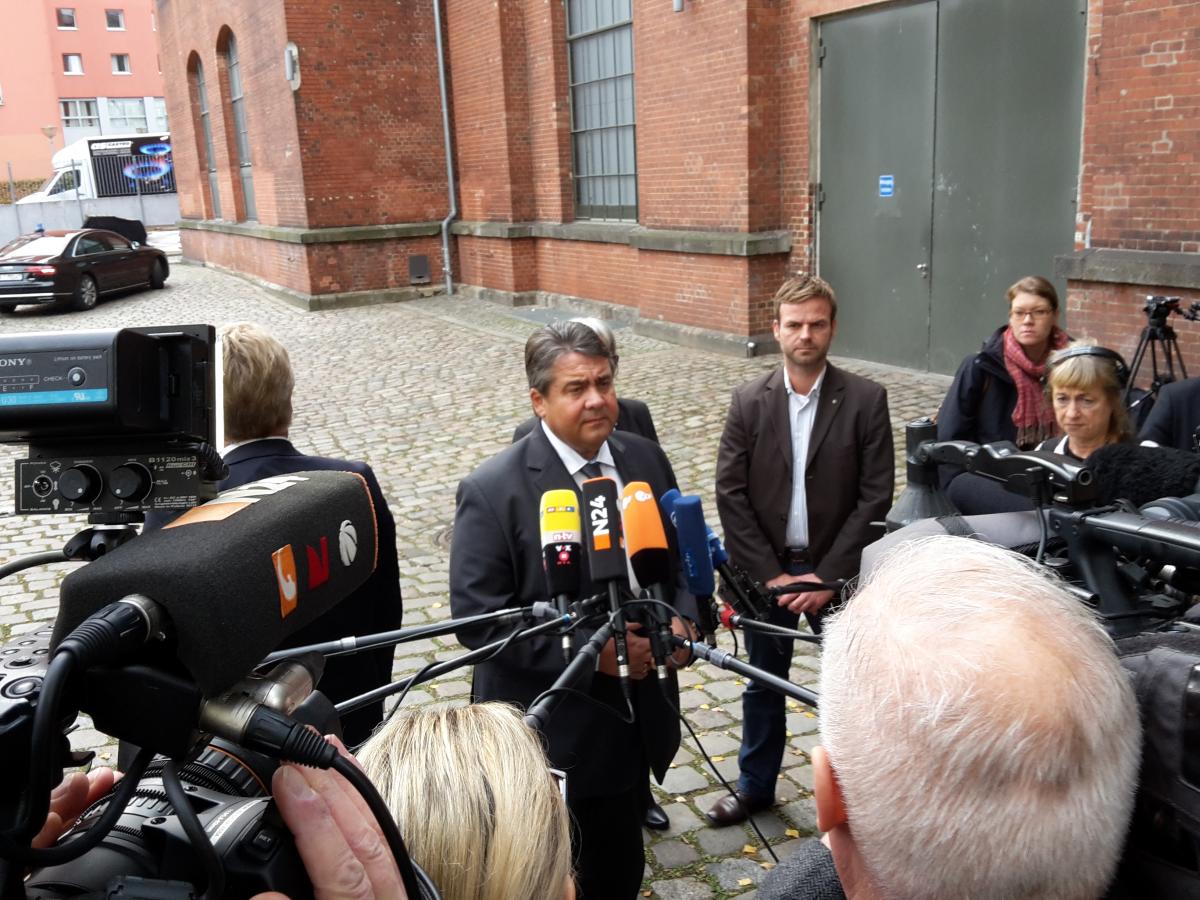 Economy minister Sigmar Gabriel talking to the press. Source: Clean Energy Wire 2016.
The rifts over the German Climate Action Plan 2050 and an exit from coal-fired power generation were highlighted at a string of events on Wednesday. Federal and regional environment ministry officials stressed the need for a framework to decarbonise the economy, including an orderly farewell to coal. In contrast, federal economy minister Sigmar Gabriel said a hasty coal phase-out was unfair to mining regions and employees, and conservative politicians warned overly ambitious climate policies at national level would endanger industry competitiveness.

Gabriel said it was necessary to offer coal-mining regions and employees alternative options for the future before discussions about the timing of a phase-out could start in a future coal commission.

At a Berlin event by mining union IG BCE, Gabriel said it was key to present “job alternatives and structural alternatives to those who work in lignite, before starting to talk about reducing lignite”.

He said a commission would argue about the specific date for a coal exit instead of dealing with the necessary structural changes: “A date for the coal exit would be the only concrete result. This is why I am convinced that we should not go down that road.”

The country of the energy transition has made rapid progress in increasing the share of renewable power, while phasing out nuclear power. But CO2 emissions remain stubbornly high – partly due to the continued burning of coal to generate power – and Germany is at risk of missing its own climate targets.

Jochen Flasbarth, the state secretary at the federal environment ministry, said Germany had to resort to additional measures to reach 2020 climate targets.

The government currently struggles to finalise its long-promised Climate Action Plan 2050, which had been announced as a framework to fulfil the pledges from the Paris Agreement Germany ratified in September.

At an event on the role of energy policy in the federal elections in September 2017 and in the May vote in North Rhine-Westphalia (NRW), Germany’s most populous state and old-industry heartland, NRW’s environment minister Johannes Remmel (Greens) stressed the need for a consensus on a structured and orderly exit from coal-fired power generation and lignite mining.

“We need a dialogue about a national exit plan for hard coal and lignite. We need a consensus that is gradual, economical and socially acceptable. I would be happy if we reached a general schedule before the elections,” Remmel said at the event organized by gas network provider Open Grid Europe in the industrial city of Essen.

But EU energy and climate policy expert Severin Fischer told the Clean Energy Wire he did not believe a coal commission would see the light of day before the federal elections. He added: “I can well imagine that the issue will become part of the election campaign. The Green Party will surely adopt the coal question as an election campaign topic, while other parties will try to de-politicise it.”

Remmel also said that the transformation of the energy system would take centre stage in the run-up to the elections. He added the Energiewende debate had to move beyond electricity, to include transport, buildings and industry.

The importance of a coal exit was also underlined at an e-mobility conference in Berlin, where participants, including federal environment minister Barbara Hendricks, agreed moving to e-cars did little to protect the climate if a large share of the power they used was generated with coal.

State secretary Flasbarth warned a lack of climate policy ambition and the absence of a clear plan could result in expensive short-term fixes, such as last year’s decision to pay for the retirement of some old lignite plants.

He said the heatedly debated Climate Action Plan 2050 could provide a clear roadmap to avoid a repeat, and should include emission reduction targets for individual sectors.

The plan could also help industries to avoid investing in the wrong technologies, especially in cases with longer investment cycles such as car manufacturing, according to Flasbarth. He added the target to decarbonise the economy by 2050 included the implicit need that all newly registered cars should be able to be run carbon-emission free by 2030.

Conservative member of parliament, Thomas Bareiß, reiterated opposition to a “detailed-driven” climate action plan and national solutions. “We have the ETS (European Emissions Trading System). We have to resolve the problems in Europe,” the CDU politician said, echoing concerns voiced by other conservative party members in recent weeks.

Green politician Remmel said the Energiewende should be seen as an opportunity rather than a threat for industry. “We have to stop perceiving the Energiewende as a burden and instead focus on the opportunities for industry and the economy,” Remmel said, adding that other countries had woken up to the decarbonisation challenge. “I am worried that other countries overtake our industries if we fail to set the right framework.”

But Gabriel insisted overly ambitious efforts to protect the climate put German industry’s global competitiveness at risk. He said maintaining industrial production in Germany was just as important as climate protection: “Climate goals can only be achieved in an economically prosperous Germany.”

Gabriel said it was unlikely that Germany’s last lignite power plants would go offline in the 2030s: “Lignite will definitely not be switched off in the coming decade. And I don’t believe that it will happen in the decade after that, either.”