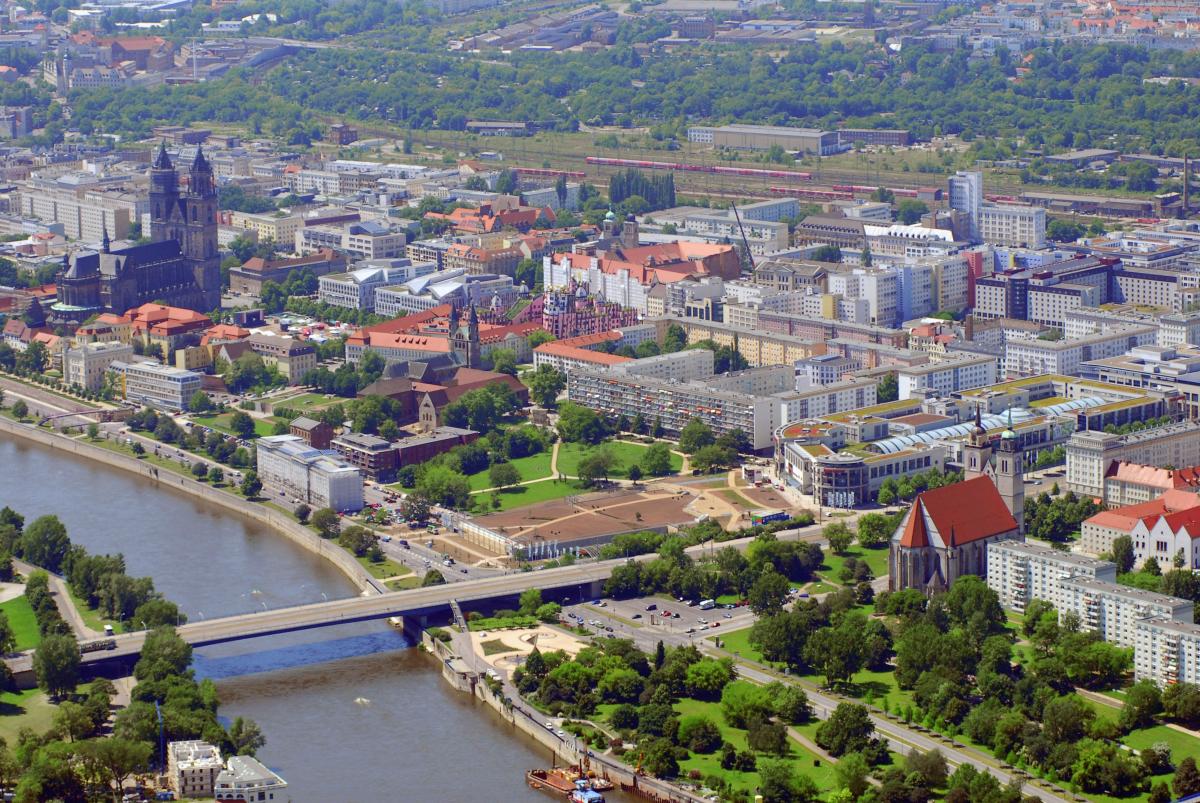 Magdeburg - Photo: Flickr/ Deutsche Euroshop AG
Germany’s energy transition is a vast national project that is reshaping the entire country. But it is happening on a local level, too. Here, the Clean Energy Wire looks at the path that one eastern German city is taking towards decarbonisation.

The former communist East German city of Magdeburg began its energy transition right after German unification in 1990. By switching from coal heating to gas, and using less energy, the mid-sized city with a population of 236,000 cut emissions by more than 65 percent between 1990 and 2012.

This dramatic reduction makes the city in the southwest of Berlin a frontrunner in the land of the Energiewende: Germany’s national targets aim to cut CO₂ by at least 55 percent by 2030.

Magdeburg's remarkable emission record is only partly due to energy efficiency measures and its selection for two exclusive pilot programmes. The city has also suffered the same fate as much of the former GDR in the years following unification: Industry collapsed, jobs were shed by the thousands, and the population of cities like Magdeburg shrank. Just about the only silver lining to this was a steep reduction of greenhouse gases.

The potential for generating renewable energy in Magdeburg is limited, like in most cities. In addition, Magdeburg is the state capital of Saxony-Anhalt, and both are comparatively under-resourced, meaning very little project funding has been available from their own budgets.

Yet Magdeburg got its energy transition off to a quicker start than most of its eastern peers. In 1993, Greens in the city council spearheaded an initiative to enter Magdeburg into Climate Alliance, a network of 1,700 municipalities across Europe working to combat climate change. Among other measures, members such as Magdeburg pass municipal resolutions to cut CO₂ emissions by 10 percent every five years. Magdeburg went further, pledging to cut its emissions by 50 percent by 2010, and came good on its promise. Climate Alliance was also instrumental in acquiring software (through ECORegionSmart) to conduct a sophisticated assessment of the city’s emissions.

Another breakthrough for Magdeburg came in 1998, when wind turbine manufacturer ENERCON set up a production site in the city - a rare bright spot in the bleak transition years. With the introduction of the Renewable Energy Act in 2000 and the upswing in renewable energy development across Germany, ENERCON expanded its Magdeburg operations, making it one of the company’s biggest facilities worldwide. Its Magdeburg sites employed 4,700 workers, as of 2015.

Magdeburg declared itself a “model city” for renewables on the back of ENERCON’s rise and opportunities presented by the Energiewende. Modest, mostly symbolic steps were taken, such as introducing the topic of renewable on to school curricula. But the model city concept was to spark bigger changes.

In 2010, the city mobilized a broad coalition of actors to apply for – and win – entry into a new, five-year, five million-euro German Federal Ministry of Education and Research (BMBF) programme called Energy Efficiency City. The coalition consisted of ENERCON and other private sector firms, NGOs, Otto von Guericke University and Magdeburg-Stendal Polytechnic, the city administration, municipal utility Städtische Werke Magdeburg, Fraunhofer Institute for Factory Operation and Automation (IFF), and Magdeburg Institute for Automation and Communication (IFAK). Almost every member had a specific project, which were linked in a combined effort to meet the city’s target of reducing CO₂ emissions (compared to 1990) by two-thirds by 2020. It comprised a total of 17 measures in the fields of buildings, city planning, electricity use, transport, energy systems, analysis and communication.

The Magdeburg-Stendal Polytechnic, for example, was funded with 1.3 million euros to assess the energy use of all of the city’s buildings, and their potential for efficiency measures and renewables production. Dozens of faculty researchers, as well as bachelor and master students were involved in the project. The database they created is now a cornerstone of the city’s Energiewende policies and the starting point for its recent involvement in the environment ministry’s Master Plan 100% Climate Protection programme, which it was selected for in 2015.

“The really tremendous thing about the cooperation between the different actors in Energy Efficiency City wasn’t just how closely we worked together,” says Volker Krüger, of the Magdeburg municipality’s environment department. “But rather that we continued to cooperate after the project was complete. Usually when the money runs out, these kinds of consortia fall apart - people lose interest. But we decided to push on together, and it has continued to be highly successful.”

For example, the Magdeburg consortium worked together to have Magdeburg selected as one of three cities for the German Energy Agency’s (dena) Energy Efficiency Municipalities programme, funded by the Federal Economics and Energy Ministry. Dena’s remit was to integrate energy and climate protection management competence into the city administration in order to build the necessary capacity to implement the Energiewende at ever-higher, more sophisticated levels.

Magdeburg is now one of the 19 localities in the second round of the Master Plan 100% programme (Marburg-Biedenkopf was in the first round). The city will submit its concept for further measures in mobility, lifestyle, energy savings, digitalization and production in 2017. The programme then runs for another three years. The goal of all Master Plan 100% participants is to design a strategy to cut CO₂ emissions by 2050 by 95 percent - which is a higher-end goal of the federal government’s target of a countrywide 80 to 95 percent CO₂ reduction by 2050.