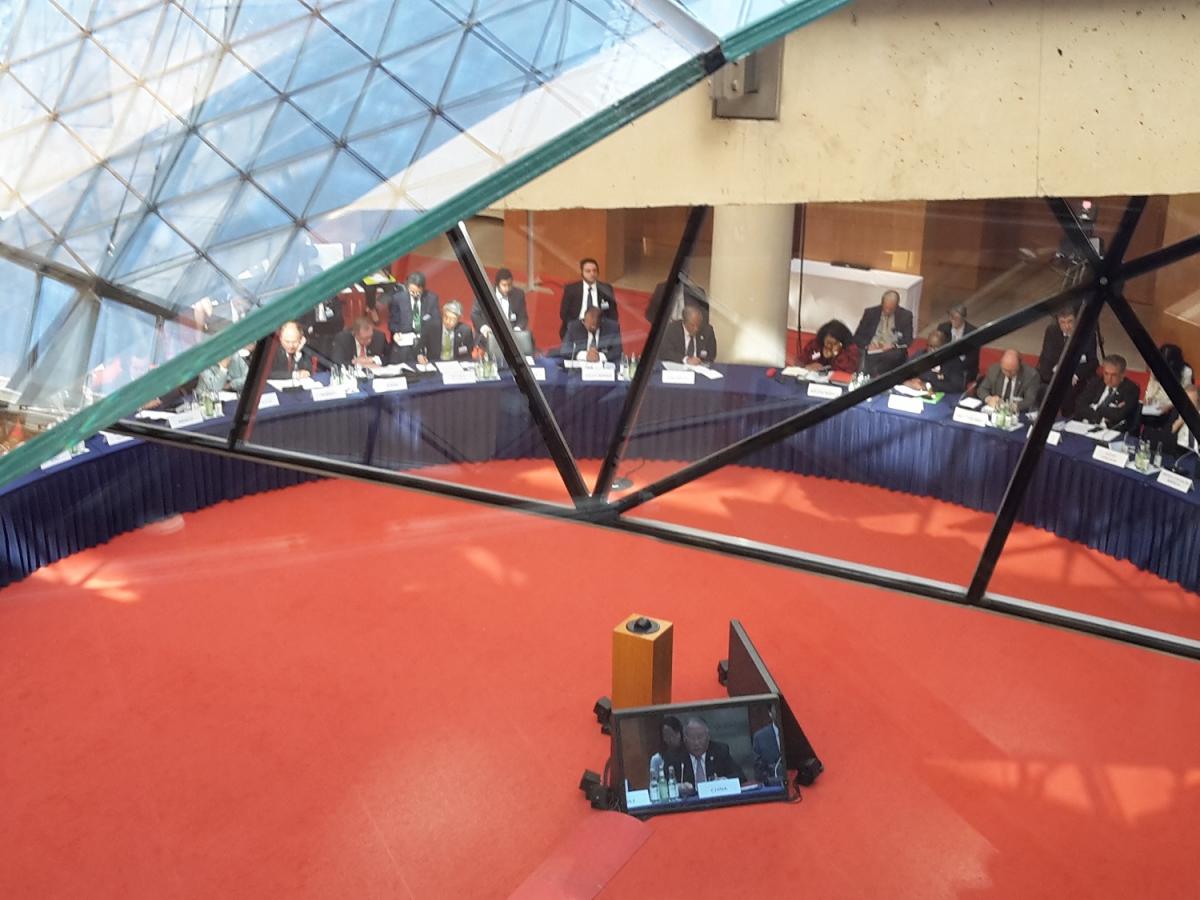 Delegates at the 8th Petersberg Climate Dialogue in Berlin. Source - Clean Energy Wire 2017.
Days before the G7 summit in Italy, foreign governments praised German Chancellor Merkel for her international leadership on climate and urged her to sway US President Donald Trump to keep the United States in the Paris Agreement. Merkel’s experience, history and credibility on the issue positioned her as a key player to keep the US at the table, Greenpeace executive director Jennifer Morgan told Clean Energy Wire. Yet for all the German efforts, some observers wondered whether other countries could really fill the gap should the United States pull out of the global climate deal.

The pressure on German Chancellor Angela Merkel has grown to throw all her diplomatic weight behind the effort to convince the US president of the importance of climate action at the upcoming G7 and G20 summits. “We all owe you a debt of gratitude for setting an example for every political leader around the world,” said Fiji Prime Minister Frank Bainimarama at the 8th Petersberg Climate Conference in Berlin, an informal meeting of international representatives that serves to prepare for the UN Climate Conference in Bonn (COP23) in November.

"We have a particular uncertainty, what we have been calling ‘the elephant in the room’. That is the challenge that the new administration in the United States presents to the multilateral consensus of the need for climate action," said Bainimarama.

US President Trump had promised during his election campaign to “cancel” the Paris Climate Agreement. But since taking office, his administration has lacked a clear position on climate and the White House has decided to postpone a decision on the matter until after the summit in Taormina.

Edna Molewa, the South African minister of water and environmental affairs, directly addressed Merkel during a round of questions after the German Chancellor’s speech at the Petersberg conference and asked her to try and “bring the elephant in the room” closer to the negotiating table.

“I try to act prudent and with restraint”

The German chancellor has repeatedly underlined her commitment to the climate issue and her willingness to address it. Merkel said work was being done on this issue, “but this has to be done in two-way talks. […] this has to be done in a way that the expression of the wish doesn’t automatically rule out its fulfilment. This is why I try to act prudent and with restraint.”

A German government official said that the G7 summit on 26 and 27 May in Italy comes “at the right moment" to talk about the Paris Climate Agreement with the US administration, but it will be a “continuous dialogue” in a long process until the G20 summit in Germany in July. The discussion within the G7 forum was "extremely important" - also because it was the first G7 for four of the leaders - but there is little hope that the US administration will decide anything in the run up to or at the G7 summit in Italy, according to the official.

German environment minister Barbara Hendricks underscored that the country was currently trying “on all levels” to persuade US President Trump and his administration to stay in the Paris Climate Agreement. This included talks between German Foreign Minister Sigmar Gabriel and US Secretary of State Rex Tillerson, Hendricks herself and Administrator of the US Environmental Protection Agency Scott Pruitt, and telephone calls between the chancellor and the president himself, according to Hendricks. In preparation for the G20 summit, there was a constant exchange between German and US officials, she said. Her  state scretary Jochen Flasbarth added that “the possibilities and flexibilities of the Paris Agreement” were discussed in bilateral talks with the US delegation at the Petersberg Dialogue.

Germany pledged to make climate action a centre piece of its 2017 G20 presidency, suggesting an “Action Plan on Climate and Energy for Growth” right from the start. Sources said that most G20 countries had been constructive in the process, including the US delegation. While the latest version already is a compromise compared to the original paper for discussion introduced by the German government, it still hinges on the final decision of the US government on climate policy.

The German government also sought the support of economic experts at the Organisation for Economic Co-operation and Development (OECD) to convince the United States that protecting the climate makes economic sense. The report "Investing in Climate, Investing in Growth", presented at the Petersberg Climate Dialogue, showed that bringing together growth and climate agendas could lift economic output by one percent by 2021 and up to 2.8 percent in 2050.

Climate-Chancellor with “a lot of experience and history and credibility”

Jennifer Morgan, executive director of Greenpeace International, told the Clean Energy Wire in an interview that Angela Merkel “absolutely has a special role” in persuading the US administration to stay in the Paris Agreement. The chancellor was an “incredibly well-respected global leader” and “very accomplished diplomat” and thus a key player in keeping the US at the table. “President Trump has said that he actually has a lot of respect for her and thinks they have the best chemistry,” said Morgan.

Morgan said that a lot had been done already to persuade the US government. “Look, you have basically the vast majority of corporate America, investors, mayors, governors, military leaders, all giving one clear consistent message to the United States, which is that it’s in its interest, its national interest to stay in the Agreement,” she said. Now it needed more messages “from the chancellor and others” that “this is the way the world is moving” and it would not be in the US’ “economic or national security interest to go against that”.

Lutz Weischer, Team Leader International Climate Policy at NGO Germanwatch, agreed: “It is important that the other government leaders give President Trump a clear signal at the summits that climate protection is not negotiable.” As an important member of both the G7 and the G20, Germany did indeed have a lot of influence, Weischer said. “Chancellor Merkel must make clear that it’s not just about staying at the table for the US, but that it’s about the actual implementation of the Paris Agreement,” he told the Clean Energy Wire.

Who would fill the gaps if Trump pulls out?

Continuing uncertainty about the US administration’s climate policy has hardened the resolve of other signatory countries to the Paris Agreement, but also prompted questions of future leadership in case Trump decides to drop out.

According to Jennifer Morgan, the move to a cleaner energy future would continue to go forward, no matter what the Trump administration decides. “We’re in the middle of a pretty disruptive moment in the energy system, with the renewables scale-up, the decline of coal globally, it's even starting to shake some of the basics of the oil economy as well."

Yet doubts remained whether the international community could fill the void should the US drop out of the climate agreement. Prof. Heike Holbig, Senior Research Fellow at German Institute of Global and Area Studies, told the Clean Energy Wire that while China together with Germany increased pressure on the US government at the Petersberg Dialogue this week, it was unlikely that the country took on leadership in climate policy. “If the US pull out, there are no special reasons for China anymore to make extra efforts, let alone lead by example,” she said. China saw its capacities limited by numerous domestic issues, which left only Europe to take on a leadership role. “In light of a shrinking economic importance on a global scale and the inner rifts among EU member states, it is hard to imagine that Europe could credibly uphold such a leadership role,” said Holbig.