G7 ministers: Invest in efficiency while energy is cheap 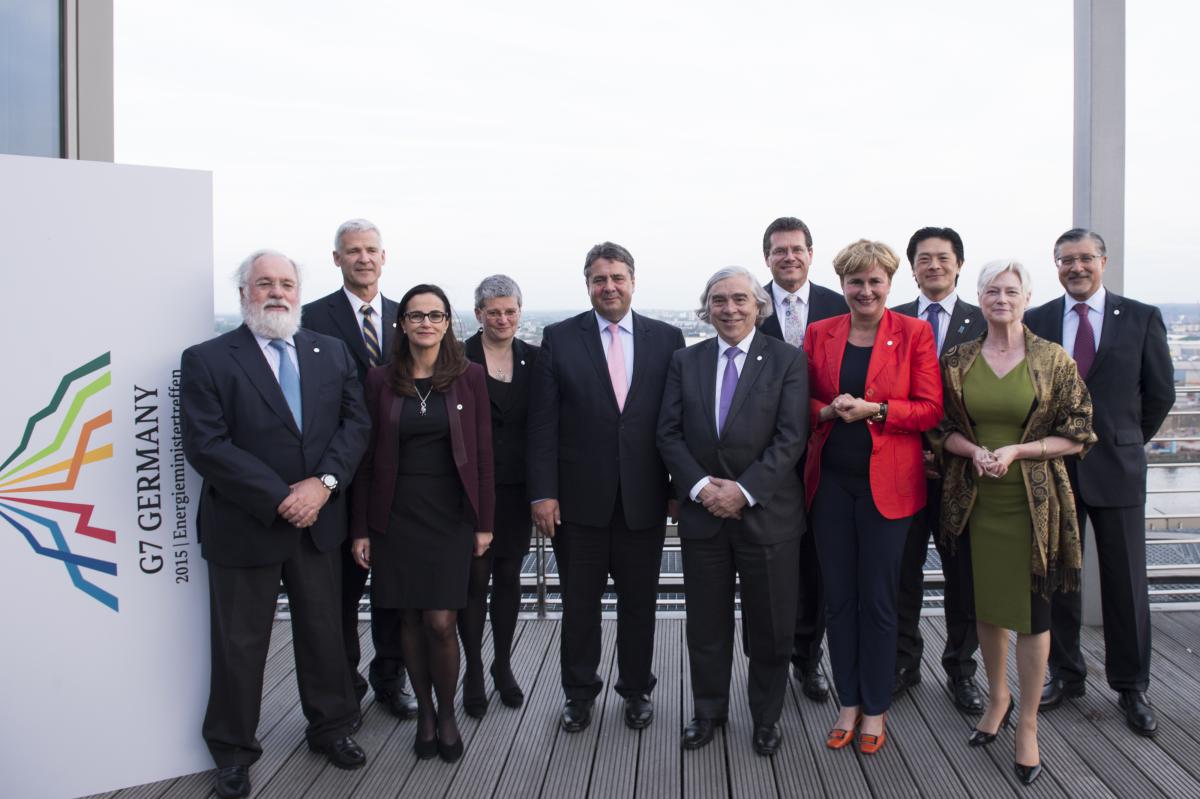 Different countries pursue different paths, energy ministers from the Group of Seven key industrialised countries explained after their two day meeting in Hamburg today – some continue to use nuclear power, others bet heavily on renewables and some hope clean-coal technology can reduce emissions from fossil fuels. “But what unites us is that all G7 nations are pursuing the same target, and that is agreeing on a successful international climate treaty by the end of this year in Paris,” said energy minister Sigmar Gabriel, who hosted the event as part of Germany’s current G7 presidency, at the press conference following the meeting.

Three energy ministers and other representatives from the G7 countries met in Hamburg to discuss how to adapt their energy systems to current security pressures and the need to curb greenhouse gas emissions ahead of the G7 summit in June and the UN climate summit in Paris in December. Energy efficiency, cybersecurity of energy supply systems and energy security were among the main topics, according to the ministers and their communiqué “From Principles to Action: Hamburg Initiative for Sustainable Energy Security”.

Gabriel wanted to convince other G7 industrialised nations (Canada, France, Great Britain, Italy, Japan and the US) that renewables can be an important contribution to energy supply security. But Gabriel’s mission to showcase the German Energiewende to his counterparts got off to a bad start – only one of the ministers Gabriel had invited for a trip to a new offshore wind platform wanted to join, according to press reports.

“Instead of having ideological debates about the pros and cons of different energy sources, we have tried to find best practice solutions,” Gabriel said after the meeting. Energy efficiency was at the centre of these discussions, he added. “It’s the key to modernising our economies and it also provides lots of low-hanging fruits both for climate protection efforts and by saving our citizens’ money.” Gabriel said it was wise to invest in energy efficiency while energy prices were low, because otherwise companies would be harder hit when energy costs rise again.

US: Our liquid gas exports will increase energy security around the world

The G7 energy ministers’ meeting in Rome last year had focused on the Ukraine and Russia crisis and its implications for energy security in Eastern Europe. The participants this year stressed they had moved on to new aspects. Nonetheless, both the US and Japan’s representatives brought the subject of liquid gas trading to the table. The official communiqué recognises “the valuable contribution of LNG to global gas supply security,” and the parties agreed “to take further steps to achieve a more flexible and transparent LNG market.”

Ernest Moniz, the United States Secretary of Energy, said that the US expects to begin liquid natural gas (LNG) shipments to Europe in January. “I expect by the end of this decade we will be very significant exporters of LNG and hopefully that is going to help the entire global market in terms of security of supply and in terms of a source that is certainly far less carbon intensive than coal for example.”

Germany’s environment minister Barbara Hendricks had said in April that she doubted that liquid gas imports would play an important role in Europe, particularly since the shale gas boom in the US was running out of steam.

But the G7 representatives also acknowledged renewable energies and efficiency can play an essential role in achieving energy security. “We regard enhanced energy efficiency and the increased deployment of renewable energy technologies, other sustainable low carbon technologies and well-functioning and integrated markets as major pillars of a secure and sustainable energy system,” read the final communiqué from the G7 energy ministerial.

Gabriel: prove to the world that we can have climate protection and economic growth at the same time

“An increasing number of countries are following the path of a rapid expansion of renewable energy,” said the statement. It stressed that incorporating fluctuating renewable power into the energy system posed many challenges the G7 should take a lead in addressing. There was also an agreement to lower the costs of offshore wind energy by exchanging best practices, but the document put particular stress on the need to save energy. “We underline that energy efficiency is key to enhancing sustainable energy security and contributes to the competitiveness of our economies. Energy efficiency should be regarded as the “first fuel” and the most cost-effective way to meet energy demands.”

Moniz said the prospects for the climate summit in Paris were much brighter now than only a few months ago. Gabriel said the G7 had a very important role to play for the Paris summit because rich nations had to prove to the world that climate protection and economic growth can go hand in hand. The G7 energy statement said a determined energy transition was urgently needed to decouple economic growth from carbon emissions. “We remain committed to doing our part to effectively limit the increase in global temperature below 2°C above pre-industrial level."