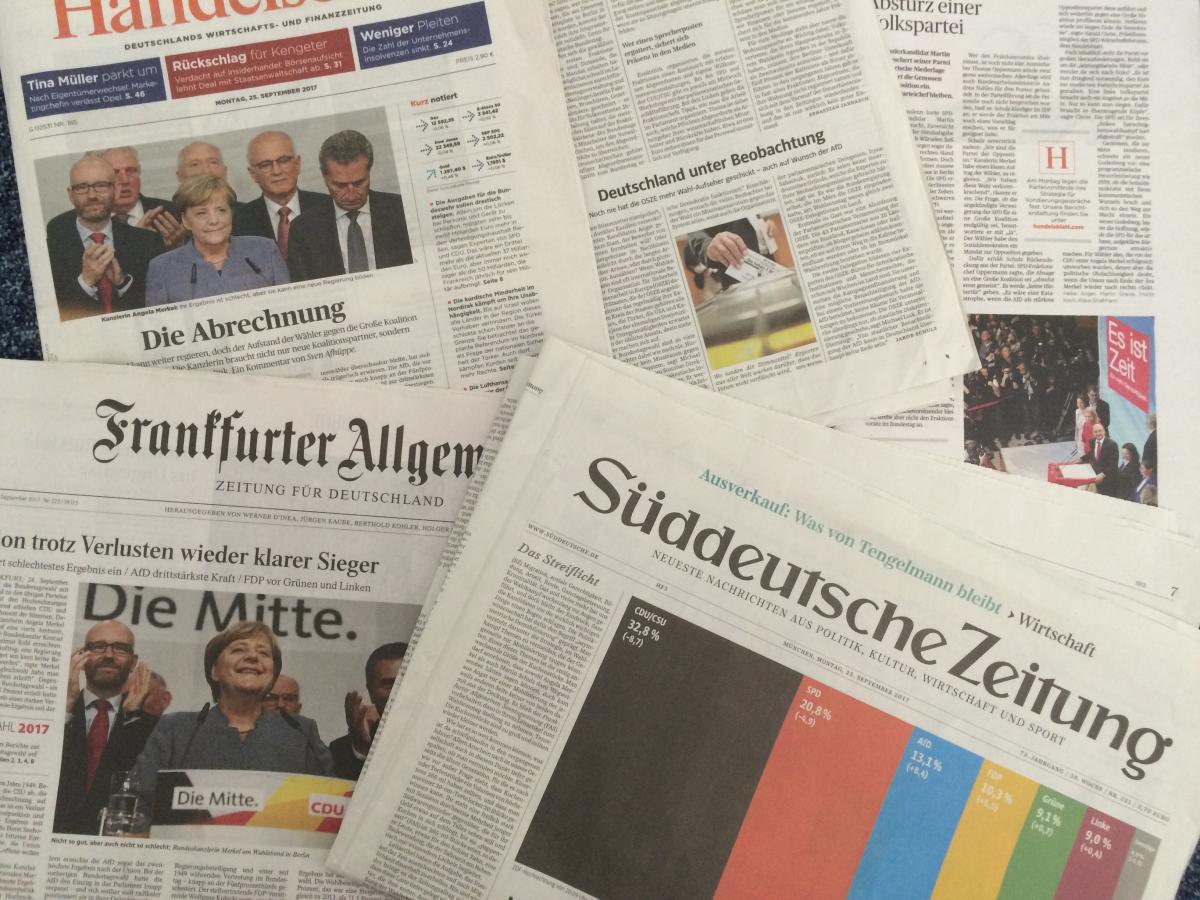 German newspaper covers on the day after the 2017 elections. Source: CLEW

German newspapers on election impact on the political system

Parliamentary elections held Sunday resulted in a major setback for Germany’s two largest parties, the conservative union of Chancellor Angela Merkel’s CDU/CSU as well as the Social Democrats (SPD), German media say after both parties suffered heavy losses. The two major mainstream parties, which have traditionally appealed to voters from all social backgrounds, were once again the country’s strongest political forces. But taken together, the votes they culled represent only slightly more than half of all voters, with 33 percent for the CDU/CSU and 20.5 percent for the SPD. Commentators regarded the result as a blow to the two parties’ grand coalition, which has governed the country for the past four years.

“The conservative union did it again,” Berthold Kohler writes for the Frankfurter Allgemeine Zeitung. “They’ve become the German parliament’s strongest force,” but this victory is tarnished by the fact “that they were able to do so with the worst result since 1949,” Kohler says. The SPD, with its worst-ever election result in post-war Germany, immediately ruled out another grand coalition and instead said it would lead the parliamentary opposition, leaving the only option for Merkel “a forced marriage” with the economic liberal FDP and the Green Party, Kohler says.

The election result is “a reckoning for the established parties,” Sven Afhüppe says in the Handelsblatt. But Merkel not only incurred her worst result ever, “she especially lost the battle against the AfD,” Afhüppe argues. The party founded in 2013 will be “the first right-wing nationalist party with ethno-racialist features entering the German parliament since after the Second World War,” which to a large extent is down to Merkel’s asylum policy and her decision to temporarily open the borders in 2015. The country’s democracy is strong enough to deal with a right-wing party, “but it’s a devastating signal for Germany as an exporting nation,” Afhüppe says.

Sunday night has been the prelude to “Merkel’s endgame,” Kurt Kister writes in Süddeutsche Zeitung. The chancellor has “gone beyond the peak of her political existence,” he says, arguing that the conservatives could expect the same trajectory that the SPD has already been struggling with for the past decade – “the erosion of its traditional voter basis.” Merkel so far has managed to keep the conservative camp together, but the meagre result only is “a foretaste of what is to come in 2021” at the next general elections, he writes.

Merkel scored a “nightmare victory,” Ralf Schuler writes in the popular tabloid Bild Zeitung and suggests that forming a new government “will become more difficult than ever before.” Regardless of whether a coalition with the Greens and the FDP or a renewal of the grand coalition is in the offing, the chancellor will have to “make sure the coalition agreement contains as much pure conservative union content as possible.” The AfD’s success will reinvigorate the conservatives’ internal strife over how to cope with large numbers of asylum seekers and manage the integration of migrants, Schuler says. “As a weakened party leader, Merkel will have a hard time prevailing with her course.”

Germany’s parliament has “a cosmopolitan perspective” that debates the most pressing challenges for Germany and the wider world, Georg Löwisch writes in left-wing newspaper the Tageszeitung (taz). With the AfD, the parliament will now also host people “who see the world through the lens of the offended,” he argues. Germany’s parliament, the Bundestag, is “democracy’s nerve centre” and it can be paralysed by attacks from the inside, Löwisch says. “This has to be prevented,” he argues, calling on the other parties not to pick up any issue the AfD raises. “If the AfD frothes at the mouth in the Bundestag, the others have to react with the objectivity” of a county clerk, he says.

German media on coalition talks ahead

German chancellor Angela Merkel will face plenty of stumbling blocks if she sets out to forge a coalition of her conservative CDU/CSU block with the pro-business Free Democrats (FDP) and The Greens, media commentators point out on the day after federal elections. The chancellor might find it hardest to bridge differences between the Bavarian arm of her own party alliance, the CSU, and The Greens, especially on issues of immigration and security. But FDP and Greens also will have to compromise on energy and climate and overcome long-standing animosities, they write.

The FDP leader has always irked the Greens with his push to soften emissions standards for cars, writes Barbara Gillmann for the business daily Handelsblatt. Other areas for conflict include health insurance and EU policies. However, there are a number of important areas of agreement, Gillmann writes, citing Green politician Kerstin Andreae: “In the fight for an open society, civil rights, digitalisation and immigration we stand together.” [For a full analysis also see Handelsblatt Global Edition’s “Difficult Kingmakers”]

Both parties represent the sophisticated democratic middle class, writes Joachim Käppner in a commentary for the daily Süddeutsche Zeitung. The pro-business Free Democrats still carry baggage from the past, mainly its neo-liberal ‘the market will fix it all’-ideology, he writes. “The FDP’s dinosaur-like ideas would be a very problematic point of conflict in the climate question in the case of a coalition.” The two parties may find enough common ground to turn a coalition with the CDU/CSU into a real reform project rather than an emergency solution. “But that requires such a lot of political goodwill, that one shouldn’t be too optimistic.”

Writing in the conservative Frankfurter Allgemeine Zeitung (FAZ), Berthold Kohler argues that a so-called Jamaica coalition (named for the party colours - Black, Green and Yellow of the CDU/CSU, Greens and FDP, which match the Jamaican flag) would be a forced marriage born out of necessity. Especially the Bavarian sister party to Merkel’s CDU, the CSU, which is heading for state elections in 2018, will find such a coalition tough. The black-yellow-green start would be full of tensions rather than magic, he says. Conservative daily Die Welt concludes: “The coalition talks of CDU/CSU, FDP and Greens will probably be uncomfortable – the most difficult Merkel has ever had to lead.”

In any case, Chancellor Angela Merkel is heading into a period of difficult coalition talks, writes Ines Pohl on Deutsche Welle. In a separate piece on Deutsche Welle on the relationship of the FDP and Greens, Jefferson Chase writes that they have a history of sniping at one another, “sometimes in sandbox fashion.” Both parties are competing for the same voters, explaining some of their animosities, he writes. In the article, political scientist Oskar Niedermayer points to the differences ranging from refugees to the future of the combustion engine. But he sees the conflict between the Greens and the CSU as the main stumbling block for a Jamaica coalition: "[They] have drawn lines in the sand, for example, on the combustion engine and coal-burning power plants."

In Germany’s largest tabloid, the Bild Zeitung, Hanno Kautz writes that much will depend on the chemistry of the party leaders, like in the federal state of Schleswig-Holstein, where the parties successfully forged such a coalition. On a federal level, conservative CSU head Horst Seehofer or transport minister Alexander Dobrindt were much disliked in Green circles as were left-leaning Green politicians Jürgen Trittin or Anton Hofreiter in the CSU. Kautz also lists the difficult issues, but highlights another important stumbling block: Green party members who might consider compromises as treason to its party ideals.

Bild-author Kautz points to a picture in leftist newspaper taz, that asked “How stoned do you have to be” in reference to cannabis-smoking fans of Jamaican reggae idol Bob Marley in its article about what conservatives and FDP had to offer the Greens to lure them into a coalition. Taz author Ulrich Schulte writes that the Greens face a difficult time because a Jamaica coalition was pure “horror” for many of its left-leaning members. Its “mediocre” election result suggests that mainly traditional supporters cast their vote for the party, making any compromise on core issues now more difficult, Schulte says.

On one of Germany’s most-read online news site, Spiegel Online, Sebastian Fischer calls for courage. “Jamaica is an opportunity for Germany,” he says. Such a new coalition with four partners would bring conflicts, as new formations had been in the past, he says. But new coalitions have been reform drivers in the past. “It wouldn’t be the worst for the country if a Jamaica coalition could achieve that.”