How do Spanish activists push for climate action amidst economic recovery? 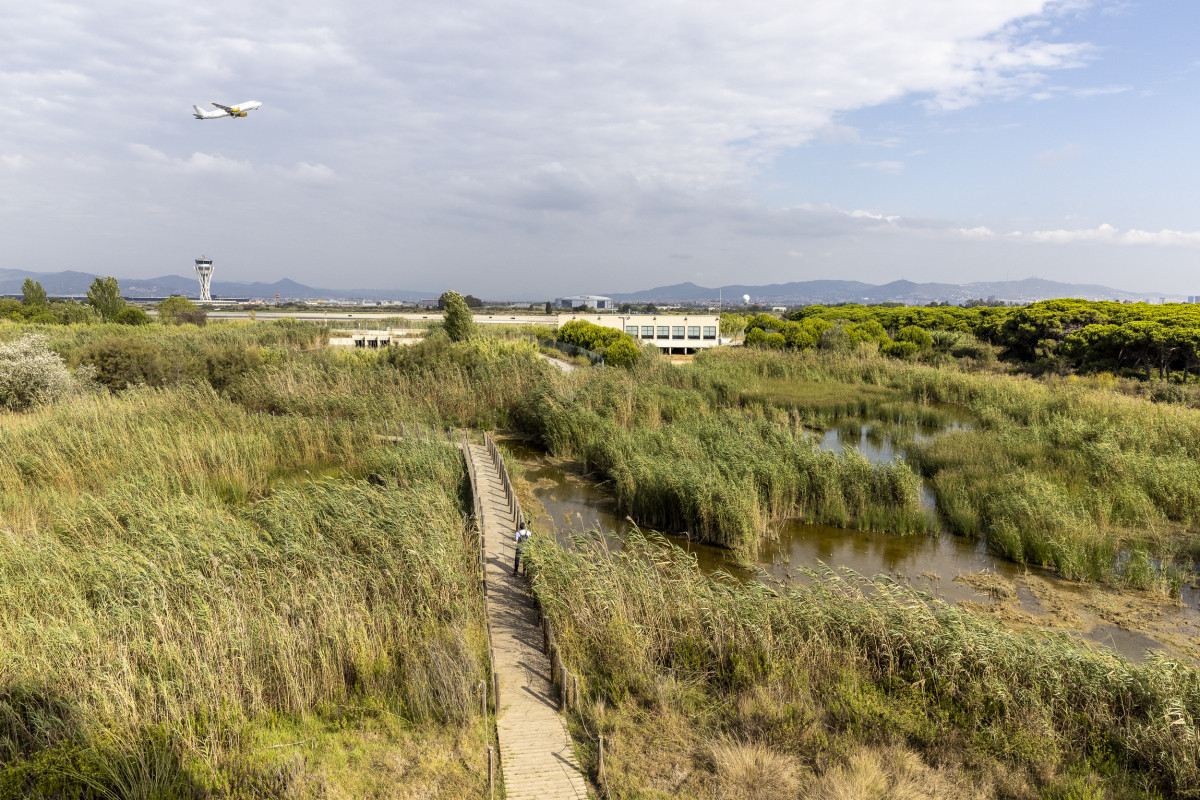 Expansion of the Barcelona airport would include the extension of a runway through the protected ecosystem La Ricarda. Photo: Barcelona City Council/Edu Bayer.

After Spain hosted the COP25 in 2019 and many Spanish cities declared a climate emergency, the country's climate movement has grown – especially among young people. But the coronavirus pandemic slowed down this newfound momentum and threw the southern European country with a significant tourist industry into an economic recession. Now economic recovery plans like the expansion of the Barcelona and Madrid airports, funded with EU coronavirus recovery money, are pushing people to the streets again. A protest on 19 September brought together thousands of people from a broad range of civil society groups, including climate activists, workers’ unions, farmers and movements fighting for decent housing. “Without sustainability there is no social justice.”

“Nature yes, airport no,” “More courgettes and fewer planes,” “Tourists go home, refugees welcome.” With these slogans, climate and social justice activists returned to the streets in Spain after the coronavirus pandemic had halted mass protests for a year and a half. Plans to expand the airports in Barcelona and Madrid prompted thousands of people to demonstrate on 19 September, with local police estimating 10.000 protesters and protest organisers even putting the turnout at 90.000 people. The organisers, who unite under a platform called Zeroport, brought together members of over 300 grassroots organisations, including climate action groups Fridays for Future, Extinction Rebellion and Ecologistas en Acción (Ecologists in Action), as well as workers’ unions (National Confederation of Labour, CNT), farmers (Unió de Pagesos) and local movements fighting for decent housing, to demand an end to the planned constructions. Not only would the expansion of the airports push up greenhouse gas emissions, it would also negatively impact protected ecosystems, local residents and farmers in the area.

"In 2019, half a million people took to the streets because of the climate issue and would have continued to do so if it had not been for the pandemic. Since then, everything has been on standby," says Samuel Martin-Sosa, who until recently was international relations director at Ecologistas en Acción, one of the country’s oldest environmental action groups. The protest just outside Barcelona, as well as a small-scale demonstration in Madrid, kicked the climate movement back into action.

“Air transport is a good case where social pressure can be gained because a large part of society does not benefit from it,” says Martin-Sosa, explaining the broad range of groups that were involved in the protest. “The tourism model is not socially sustainable. There is a long way to go between social and environmental struggles. Without sustainability there is no social justice.”

Tourism is an important sector in Spain’s economy, and this is especially true for Barcelona. The coronavirus pandemic, bringing nearly all international travel to a standstill, has hit many businesses in the sector. According to the OECD, tourism activity in Spain dropped by an estimated 75 percent between April 2020 and March 2021. By the end of 2020, more than 600,000 jobs had been lost and there were nearly 530,000 more people out of work more than 2019. According to the national workforce survey (EPA), a total of 3.71 million Spaniards were unemployed, amounting to a jobless rate of more than 16 percent. 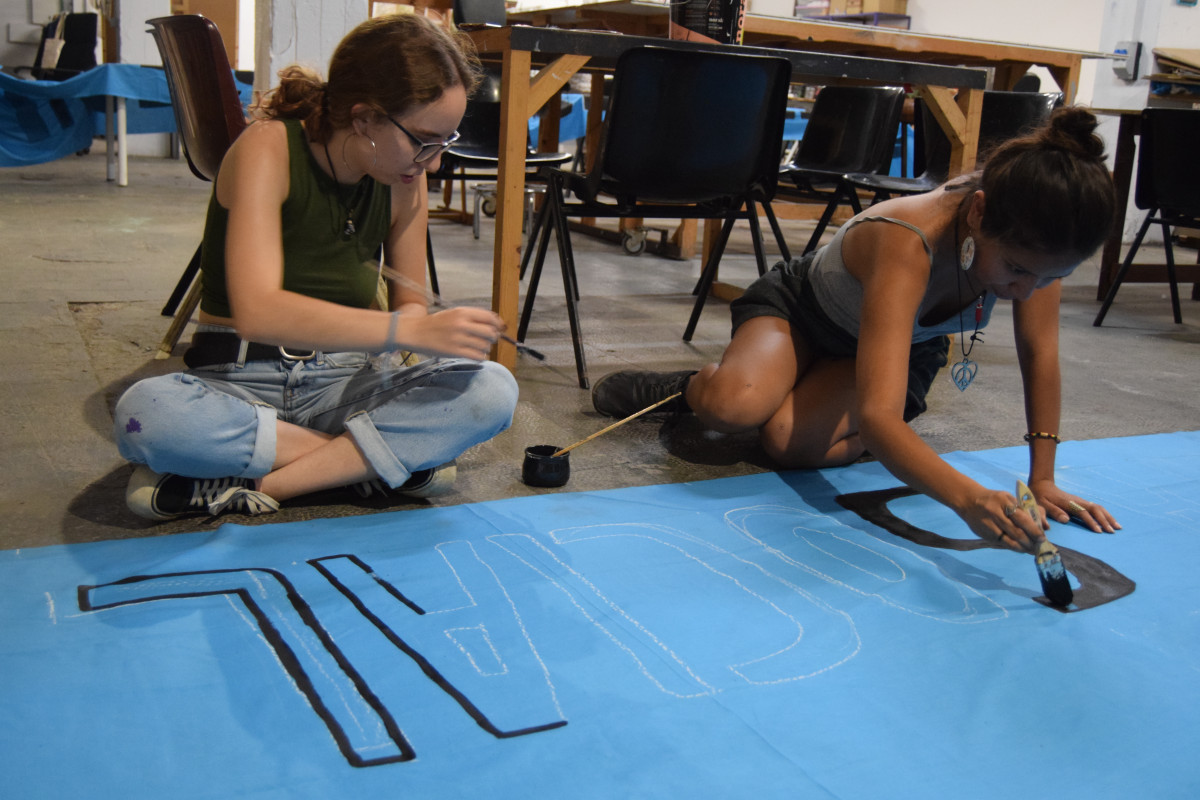 Activists preparing a banner for the protest in Barcelona on 19 September. Photo: Judit Alonso.

In an effort to boost the economy, the federal government and Catalonia’s regional government (Generalitat) agreed in August 2021 to invest 1.7 billion euros into the expansion of Barcelona’s airport. At the same time, the government announced planned investments of 1.6 billion euros in the airport of the Spanish capital Madrid. The money is part of the 140-billion-euro package that Spain will receive from the EU coronavirus recovery fund.

According to Zeroport, projects like these are meant to protect the interests of big real estate and mass tourism capital, such as the airport management company AENA. “We are in a climate, social, economic, energy and aviation crisis, and we are in a pandemic. This project is only explained by this speculative operation by AENA that wants to solve its internal accounting problems because the big investors are leaving,” says Maria Garcia, a spokesperson for Zeroport.

"The large speculative funds based in Barcelona are generating enormous social, economic and environmental inequalities,” she adds. House evictions, destruction of local businesses, precariousness and exploitation of labour, and loss of agricultural and natural spaces are some of the issues she mentions.

Zeroport therefore calls for EU recovery funds to be invested in measures to protect public services and the most vulnerable essential sectors. They also ask for a redefinition of the current transport policy, dedicating investments to those means of transport that are more socially and environmentally fair, such as railways.

As the plans first came to light, the federal and regional governments faced criticism from climate and environmental groups. With already close to 90 flights an hour before the pandemic, Barcelona’s airport expansion funded by AENA would increase passenger numbers from 55 million to 70 million a year.  Construction and public projects are the main drivers of Spain’s economy, and the deal will create 85,000 direct and 365,000 indirect jobs, according to research by Barcelona University. “This economy is linked to public works that have fed the large IBEX [Spanish stock index] companies, construction companies and banks in this country," says Garcia. Also, the plans run counter to a law passed by Spain’s government this year under which emissions should be cut by 23 percent by 2030 compared with 1992 levels, she adds.

“It seems strange to me that first the Generalitat gives the go-ahead in exchange for it being sustainable when they know perfectly well how unsustainable an airport is,” activist Martin-Sosa comments. The expansion of Barcelona’s airport would include extending one runway to a total length of three kilometres into La Ricarda lagoon and wetlands. This river delta, called Delta de Llobregat, is one of western Europe’s most important wetlands, protected under the European Union’s Natura 2000 network scheme. It is home to hundreds of plant and animal species and provides a key resting place on the north-south migratory routes of many European bird species.

Environmentalists and most local councils in the surrounding area oppose the expansion not only for its environmental impact and the noise pollution it could cause but also because the delta is needed to protect the area in case of extreme weather events – which will become more frequent as the planet continues to heat up. “Given the situation of climate change that is expected in Catalonia, floods and sea storms will be more frequent and will cause the airport, the port, urban areas and the fields of the Llobregat delta to be flooded regularly. It is precisely wetlands, such as the Ricarda, that have the function of absorbing these waters, because they allow them to infiltrate the subsoil,” says Annelies Broekman, a researcher specialising in water and global change at the Ecological and Forestry Applications Research Centre (CREAF).

“Those who mobilise the most these days are young people, which has not happened since the 1970s,” says Josep Lluís Espluga, associate professor of sociology at the Autonomous University of Barcelona. Traditionally, the Spanish environmental movements have been focused on policies and projects that would threaten local territories, he says. “The groups were deeply rooted in the territory. In the 70s, 80s and 90s, there were two trends: political ecology that aimed to change the production and consumption model, represented by groups such as Ecologistas en Acción, and groups of nature researchers, who were focused on the defence of the territory.” 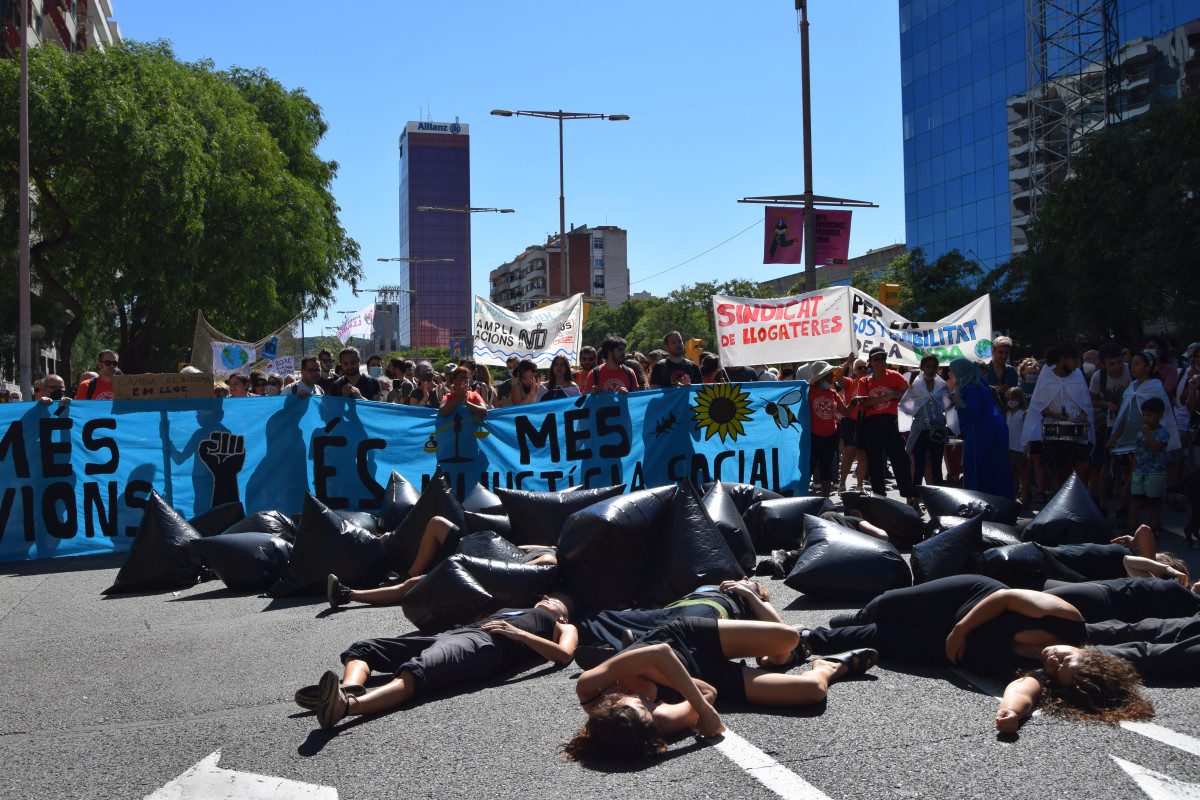 Protest against the expansion of the Barcelona airport on 19 September. Photo: Judit Alonso.

With the emergence of groups of young activists like Fridays for Future and Extinction Rebellion in the last few years, the classical environmental movements have taken a backseat and the focus has shifted to the global issue of climate change from local fights for the environment, Esplunga says. "This is positive because it takes the global vision of the causes that for a long time had been diluted.”

“Climate change is a global problem that can’t be managed by local groups,” adds activist Martin-Sosa. "In the past five years the climate justice movement has taken on a new dimension with a key element: the students," he adds.

The final decision on the future of the airport expansion plans is expected to be announced by the government during the Council of Ministers’ meeting on 30 September. But earlier this month, the expansion of Barcelona-El Prat Airport has been put on hold due to ecological concerns and differences of opinion between the federal and regional governments.

Although this temporary halt amounts to a victory for the activists from Zeroport, the plans can be picked up again when the next five-year AENA investment programme begins in 2026.

Aside from organising demonstrations, Zeroport is trying to work on a political level. In early September, some members delivered a speech at the regional parliament in Catalonia, while others attended a meeting with Barcelona City Council. The activists are also preparing a request to denounce the airport expansion at the European level, because full approval by the European Commission is needed for the project to commence.

For the activists, the fight against the airport expansion plans exemplifies the many different issues the movement tries to connect in its fight for climate justice. “This demonstration against the expansion of the airport has concretised a fight that covers many issues within what we consider the great change that has to happen for our society and our way of life to be truly sustainable,” says Maria Marcet, a spokesperson for Fridays for Future Barcelona.

Can the UK climate movement go 'beyond politics'?