Global meat consumption is the biggest driver of agriculture’s climate impact and also comes with a wide range of other environmentally damaging effects that look set to intensify in the coming years, German NGO BUND and Green Party-affiliated Heinrich-Böll-Foundation have found in their Meat Atlas 2021, a stocktake of global livestock and meat production activities. In 2018, the 20 leading livestock companies caused more greenhouse gas emissions than Germany, Britain or France, with 90 percent coming from the animals themselves or from supply chain activities such as producing animal feed, the authors found. Yet governments currently make little requirements for meat producers to fully reveal their carbon footprint, the groups said. The growing market power of a few centralised meat producers allows them to enforce low meat prices, thereby putting pressure on individual livestock farmers to increase output and farm yet more animals – a practice often only sustained by government subsidies for farming, they argued.

Between 1998 and 2018, global meat consumption doubled to 320 million tonnes largely due to rising population levels and incomes in developing countries bringing consumption patterns closer to that of richer nations such as Germany or the US, which still have the highest per capita consumption of meat and other animal products by far. “For many people around the world, meat is still a luxury item,” the authors say, whereas the average German eats about 60 kilograms and the average US American more than 100 kilograms of meat per year. The increasing popularity of vegetarian products in high-income countries has so far only had a minor impact on overall consumption levels, they note.

In a separate press release, NGO Germanwatch called on the next government to restructure livestock farming practices in Germany and ban industrial-style stall constructions. “This not only runs counter to animal welfare but also to the recommendations made by the commission for the future of agriculture,” Germanwatch’s Tobias Reichert said, adding that a new government should make this the fundament of its farming policy. Animal numbers would need to be reduced to make livestock farming more sustainable and reduce its impact on agriculture’s total carbon footprint, which currently accounts for about 9 percent of Germany’s emissions. 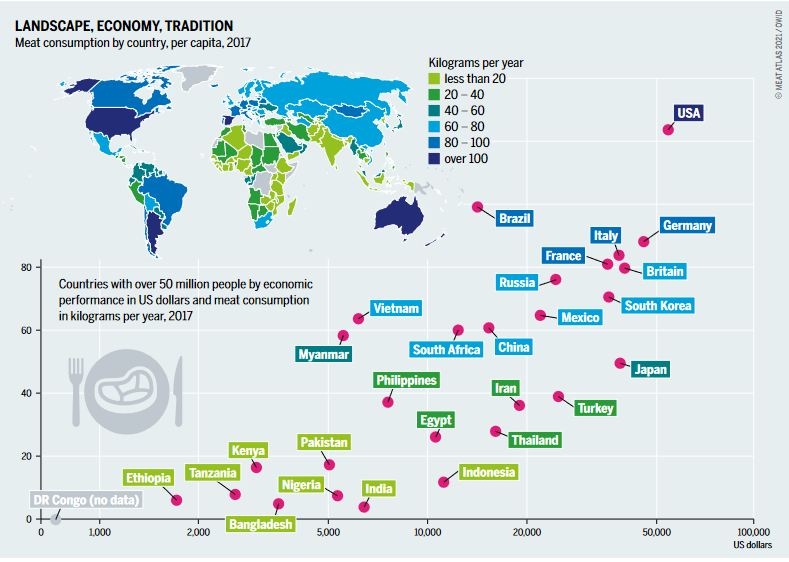