In the media: Energy efficient buildings and CEO on Vattenfall's future

Around 60 percent of the EU’s total energy consumption comes from heating, hot water, air conditioning and lighting, the European research project ENTRANZE (Policies to Enforce the Transition to Nearly Zero Energy buildings in the EU-27) says in a press release. Stronger national requirements and increased support to home owners could reduce CO2 emissions from buildings by 50 to 75 percent by 2030, according to a press release from the Fraunhofer ISI and the Öko-Institut, two of the project's German collaborators. Scientists involved in the research call for reduced use of oil for heating and energy efficient refurbishment of old buildings. Europe-wide data compiled by the project compares the age of buildings (Figure 1) and the use of different energy commodities (Figure 2). 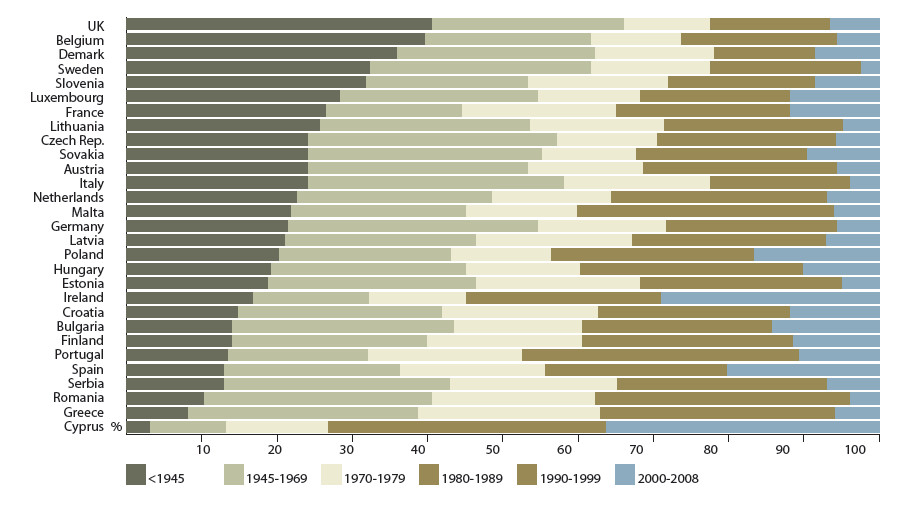 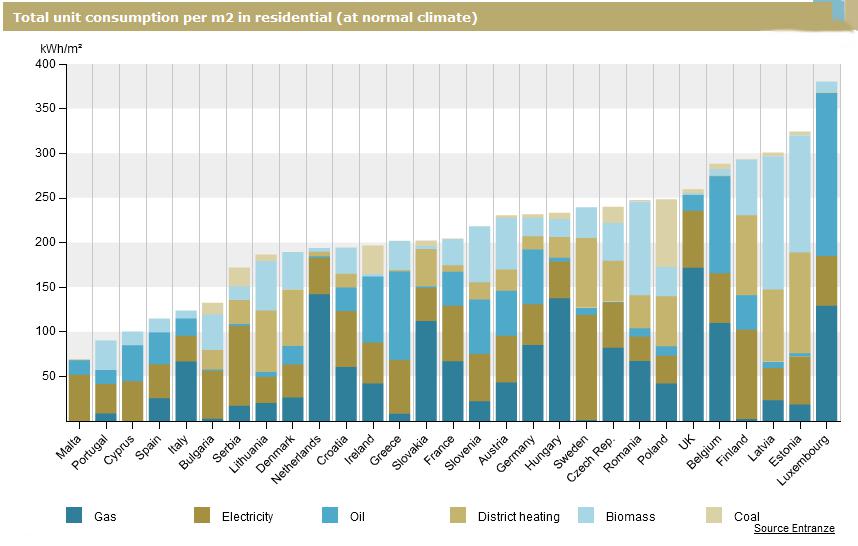 Find general information on the project in English here.

The ENTRANZE data tool provides figures and charts on structure and dynamics of buildings and related energy systems here.

New power supplier Maxenergy is trying out a provocative offer, Welt online reports. According to the company from Augsburg, 3,000 people have signed up since the 1 December to receive pure nuclear power. A press officer at Maxenergy told the newspaper its nuclear tariff was “more than a PR gag” and that nuclear power was better than coal – both for the climate and the environment. Friends of the Earth Germany called the offer “amoral and scandalous.”

140,000 people evacuated from the Fukushima area are still unable to return home while 6,000 workers are still working to extract nuclear fuel elements from the destroyed power station, and on parts of the site, radiation is still too strong even for robots to operate in, Markus Balser writes in the Süddeutsche Zeitung. Yet news that a new German power supplier is offering customers “pure nuclear power” is not a “distasteful joke,” the author writes. Maxenergy, an power company in Augsburg, announced its 100 percent nuclear power tariff this week, and 2,900 households have already signed up, the article reports. The company acquires nuclear power certificates from Switzerland to back up its promise. The nuclear-only tariff at Maxenergy is not cheaper than other deals on the market, Balser writes.

“New Vattenfall CEO Magnus Hall: ‘What is true for E.ON, is pretty much true for us’”

In an interview with Energy Post, Vattenfall’s new CEO Magnus Hall draws a comparison between the sale of its German lignite operations and E.ON’s recent split, saying “The problem we needed to solve was the CO2 issue,” and that it makes sense to focus on areas that don’t rely on the market power price, which no longer drives investment. “If you look at renewables, the money doesn’t come from the actual energy price, it comes from subsidies,” he told Energy Post. Hall said he was not in favour of capacity markets as an alternative model to drive investment - rather, market forces should be left to bring down over capacity. Hall also said that splitting Vattenfall along geographical lines had been considered, but rejected, saying the idea didn’t make sense.

See the interview in English here.

In an article for GlobalPost, Jason Overdorf looks at the challenges to connecting up the European electricity grid across borders. Overdorf writes that there is “nearly unanimous agreement” that the cheapest and fastest way to reach Europe’s climate targets is to connect all 28 member states to an EU-wide “supergrid.” This would help counteract the destabilising effects of fluctuating renewable power supply, as solar power from Spain, for example, could balance a shortfall of wind power from Germany. This would “drastically” reduce redundant capacity and the need for reserve capacity from fossil fuel plants, Overdorf writes. But the project is hugely expensive, the article says, and balancing the interests of the many stakeholders is far from easy.

One the EU’s highest courts has ruled that exemptions from a green energy tariff for energy intensive industry as part of Austria’s Green Energy Act constituted state aid and were in breach of EU law, EurActiv reports. The article notes that the decision is in contrast that over Germany’s EEG surcharge for renewable energy development, which energy-heavy businesses do not have to pay. Meanwhile, Poland is facing a daily fine of 61,000 euros for failing to implement EU the renewable energy directive, the article says.

An article on EurActiv looks at a report launched by Friends of the Earth Europe and CEE Bankwatch Network, warning that EU funds earmarked for development in Central and Eastern Europe could be spent on projects that "lock them into dirty energy futures.” Spending proposals submitted by Poland, the Czech Republic, Hungary, Slovakia, Latvia, Estonia, Lithuania and Croatia for the 146 billion-euro fund include support for high-carbon industries, while funding for renewables has not risen over the last seven years, the report says. Funds for transport favour roads over rail and clean urban transport, and funds for waste disposal focus on landfill and incineration rather than waste prevention, reuse, reduction and recycling. The plans are still subject to negotiation and change, EurActiv writes.

See the report in English here.