In the media: Losing the "coal war"; the magic of efficiency

A heavy storm is brewing above Sigmar Gabriel, Germany’s minister for Economic Affairs and Energy, as unions, employees, industry heads and parts of his own party rebel against his plans for an additional climate levy for old coal-fired power plants, writes Martin Greive in Die Welt. “For Gabriel, the coal dispute is a difficult balancing act. On the one hand, it’s his duty to make suggestions how the climate goals can be achieved. On the other hand, he doesn’t want to annoy the friends of coal and industry.” Given the strong resistance, Gabriel’s proposal is likely to be modified, according to Greive. If Gabriel sees no other options, he might resort to a trick calculation and insist that CO2 emissions are counted where the power is consumed and not where it is produced, writes Greive. Given Germany’s sizeable exports of emission-intensive electricity, this would be a way to put a gloss on emission statistics, the article says.

“Extension of charging infrastructure for e-cars on track”

The number of charging stations for e-cars is rising rapidly in Germany, according to the Association of Energy and Water industries. “Last year, there were 5,500 charging points at the public’s disposal. Since mid-2014, more than 800 charging points have been added, which is an increase of 18 percent,” said the BDEW in a press release based on a survey of its members and other market participants. 839 towns or municipalities now have a public charging point, up from 652 at the end of 2013, according to the BDEW.

“Turn away from Putin”

Germany urgently needs to invest in a liquefied natural gas (LNG) shipping terminal to reduce dependency on Russia, argues Björn Finke in an editorial in the Süddeutsche Zeitung. Experts expect rapid growth in the sector, but the boom will bypass Germany because it has no facilities to import this gas. No one will invest in an LNG terminal because the gas coming through Russian pipelines is cheaper, writes Finke. This is why the state must step in with subsidies, according to Finke. “In the German energy market, producers of renewable energy receive billions of support. So some support for the future of the gas supply should be possible.”

“The magic of efficiency revealed”

In a blog post for energytransition.de, Craig Morris says there are two simple steps which will help Germany meet its aim of reducing energy consumption by 50 percent by 2050, relative to 2005: cogeneration plants and Passive House architecture. Passive House design can reduce energy consumption for heating by 90 percent, Morris writes. This is key when you consider that 50 percent of Germany’s energy consumption is for heating. Combined heat and power plants, which make use of the heat produced as a by-product of power generation, could cover much of the remaining demand. But Morris says that while these technologies have been available for some time, more political will is needed to make use of them. 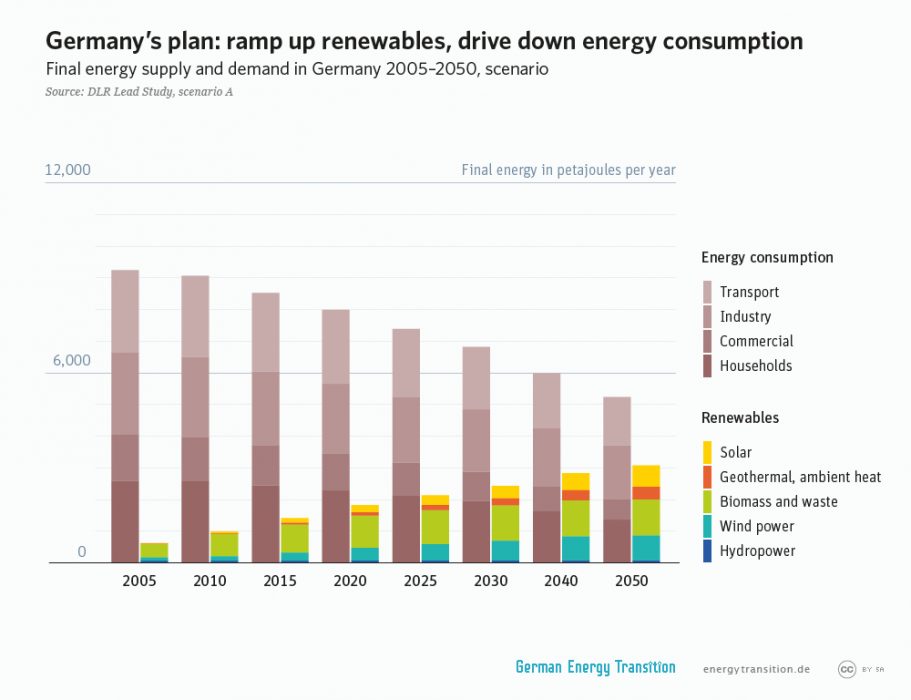 “Home insulation is a losing deal”

Insulating old homes with modern insulation to save energy has become a luxury pursuit, writes Michael Fabricius in Die Welt. The fall in oil prices has made it practically impossible to make retrofitting a sensible economic proposition. As long as heating oil costs less than 70 euros, no investment in heat insulation will pay for itself within 20 years by saving costs, writes Fabricius.

Institute for Sustainable Use of Energy and Resources (INER)

In a new study , the INER provides an analysis of drivers and restrictions for the innovation and diffusion of small heating systems in the residential sector (wood heating systems, solar collectors and heat pumps) from 1990 until today. It examines the political, legal, financial and technological framework conditions for the development and deployment of those technologies. The study, which received government financing, concludes with a look at the key challenges ahead.

See the bi-lingual summary of the study here.