In the media: Power price falls - Germans split over coal

Germans are deeply split about the mining and use of coal, a study from the German Centre for Energy Resources Freiberg (DER) finds. There is no clear majority for or against coal, and the issue is highly polarising, the authors say. But considering critical reporting on coal by the news media, “approval rates for domestic mining are relatively high. Three out of four Germans disagree with the statement that there should be no more mining in Germany,” concludes the study, which received government funding. “It’s wrong to suggest that a large majority of Germans demand an immediate exit from coal mining. On the other hand, there also isn’t a majority in favour of coal mining in Germany,” according to the DER. But the study also concludes that overall, Germans’ are poorly informed about issues involved.

See CLEW’s factsheet on polls about the Energiewende here and an article here.

For the first time since 2000, the average power price for households in Germany has fallen, the Association of Energy and Water Industries (BDEW) reports. A three-person household using 3,500 kilowatt-hours of electricity per year pays around 84 euros per month in 2015, compared to 85 euros in 2014. This slight decrease comes as taxes and levies including the renewable surcharge, as well as the wholesale price for power, have fallen. An average household pays around 18 euros a month for the development of renewable energies through its power bill, the BDEW says. 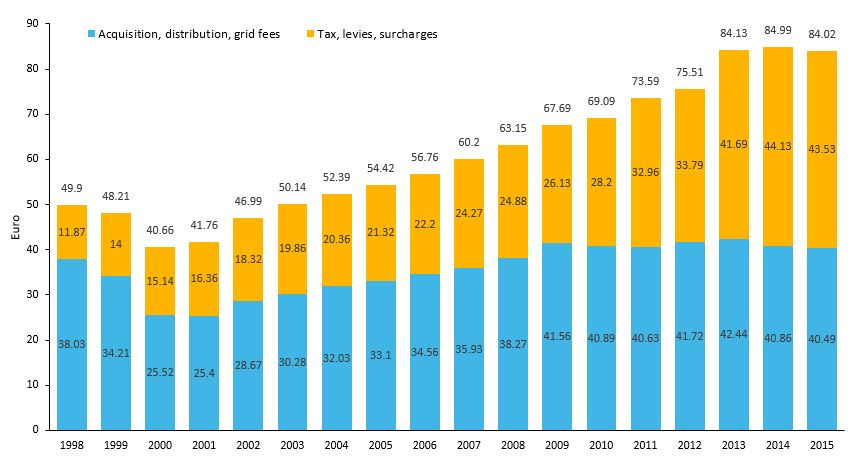 See the BDEW press release here and their power price graphs (both in German) here.

“After the nuclear phase-out, now the end of coal?”

Energy Minister Sigmar Gabriel’s proposal for a climate levy on excess emissions from old coal-fired power stations is being met with widespread protest, from both trade unions and industry, according to a dpa article. Gabriel’s Social Democrats (SPD), the coalition partner of Angela Merkel’s CDU, are used to her only participating in a new policy once there are signs of success, a SPD member of parliament told the news agency. Gabriel doesn’t want to alienate both the friends of coal and businesses at the same time, the article says. A majority of Germans are in favour of a coal exit by 2040 at the latest, and Greenpeace warns against the high mercury emissions from coal plants, highlighting that German safety limits are far less strict than in the US. Meanwhile utilities and trade unions warn against the loss of thousands of jobs if Gabriel’s climate levy is implemented. “It’s a complex problem – Sigmar Gabriel faces a hot spring,” the article concludes.

State-owned KfW bank is to introduce a new 1 billion euro green bond portfolio “to expand its promotional acitivites for climate protection with a capital market instrument,” a press release says. Starting in the second quarter of 2015, KfW will purchase green bonds under the new scheme, following an instruction by the German government, which wants to strengthen the market for green bonds, the FAZ reports. "By purchasing green bonds, KfW will help finance suitable climate and environmental protection projects, for instance in the fields of resource efficiency, renewable energies, waste management, (waste) water management, biodiversity and non-polluting transport systems,” Environment Minister Barbara Hendricks said, according to a press release.

“Germany is the laboratory for the Energiewende and Industry 4.0”

The transition to energy systems dominated by renewables will be a core topic at the industry trade fair in Hannover next week, according to an article in the Frankfurter Allgemeine Zeitung. The German Energiewende is a laboratory for the whole world, said Hendrik Weiler from Swiss engineering group ABB at a press conference. “144 countries in the world have renewable targets and 138 countries provide public support for their roll-out. All of these countries are watching how Germany manages this transition.” The “Hannover Messe” from April 13 to 17 is the world’s most important exhibition of its kind, according to the article.

The government needs to take brave steps to stop the “coal boom”, promote energy efficiency in buildings and start a renewable transition in transport, writes Joachim Wille in an editorial in the Frankfurter Rundschau. This is necessary because last year’s reduction of CO2 emissions was largely due to warmer weather and Germany risks missing its emission targets for 2020, argues Wille. The weather was the top defender of the climate last year, but not one you can rely on, writes Wille.

The Ministry for Economic Affairs and Energy (BMWi) has published a translation of the Renewable Energy Act (EEG) on its English website, along with several infographics and other explanations concerning the bill. The EEG underwent reform in 2014, the amended law came into effect on 1 August 2014.

See the BMWi information on the EEG here.

See a CLEW dossier on the changes made to renewable promotion in 2014 here.