In the media: Renewable jobs; farming "more dirt than eco"

Low electricity prices at the power exchange and the dominance of renewable energies mean many communal utilities are now unprofitable, according to the German Association of Local Utilities (VKU). This puts many municipalities in a “catastrophic” financial situation, says VKU head Ivo Gönner in an interview with Handelsblatt. He urges the government to stop postponing fundamental decisions over the future power market design and demands additional support for relatively climate-friendly combined heat and power plants so new installations can be built. “Many local utilities that have invested in power stations are currently considering mothballing them – decision-makers in Berlin need to keep that in mind,” Gönner told the paper.

See CLEW’s Factsheet on the reform of the power market here.

An upcoming report by the Federal Environment Agency says that little progress has been made on reducing the environmental impact of German argriculture, reports Die Welt. Over the past 30 years, new technology has made other sectors greener. But the UBA found that once agricultural vehicles, fertiliser and other processes are taken into account, agriculture is now the second largest emitter of greenhouse gases in Germany after industry.
Industrial livestock farming has the greatest environmental impact, contributing heavily to greenhouse gas emissions, UBA head Maria Krautzberger told Die Welt. Agriculture is responsible for the fact that many legally binding environmental standards are not achieved and there is no trend reversal in sight, the study finds. The government’s aim to increase the share of ecological farming to 20 percent by 2010 was clearly missed, partly because many farmers switched to the more lucrative production of maize for biogas plants, according to the article.

Most jobs in the renewables sector are concentrated in China, Brazil, the US, India and EU member states, an infographic by Berlin-based outlet Strom-Report shows. Looking at the renewable sector's share in employment by country, Germany leads with 4.5 of 1,000 Germans working in the sector. Globally, the number of jobs in the eco-energy sector rose from 5.7 million in 2012 to 6.5 million in 2013, data from the Internationl Energy Agency IRENA show. The solar sector is the biggest employer (2.8 million), followed by biomass (2.5 million). The wind sector employs 834,000 people. 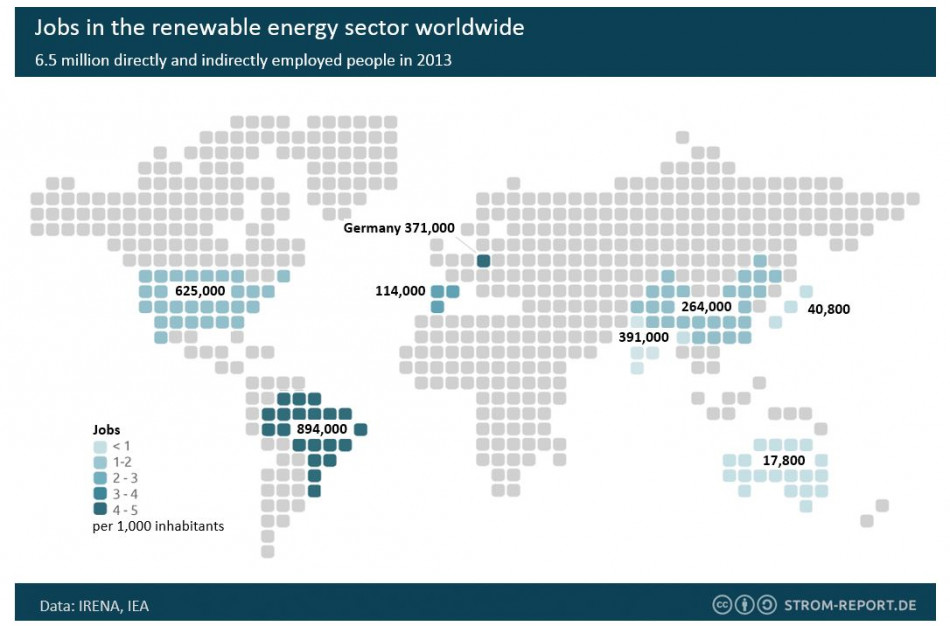 See the Strom-Report infographic and text in German here.