Factsheet
In size, the “Stadtwerke” individually cannot rival the four largest players in the German electricity market – E.ON, RWE, Vattenfall and EnBW -- but taken together, they are a powerful factor in Germany’s energy landscape.

The Stadtwerke get far less play in the international coverage of German energy policy than the “Big Four” utility giants. These municipal utilities focus their activities on a certain geographic region, even though many have expanded beyond their initial borders. Originally, public authorities set up more than 1,400 Stadtwerke in Germany as local monopolies to ensure water supply, treat waste water and provide public transport and energy.

When Germany liberalised its energy sector in 1998, allowing competition to hitherto regulated monopolies, many predicted local companies were doomed because they were too small, lacked access to capital markets and political meddling would render them uncompetitive, as the top managers of the publicly owned Stadtwerke are often former politicians and politicians are also on the boards. Yet almost 20 years later, most Stadtwerke are alive and well and many are even in a better position than the Big Four.

The Stadtwerke are a force to be reckoned with in Germany’s utility sector. According to the Verband Kommunaler Unternehmen (VKU), the German Association of Local Utilities, they employ nearly 250,000 people and in 2013 had combined sales of about 110 billion euros and invested 8.5 billion euros overall in their assets. Their market share in German energy retail amounts to 46 percent in electricity, 59 percent in gas and 65 percent in heat distribution. In comparison, RWE, the largest single retailer in Germany, has a market share of 16 percent in electricity and 10 percent in gas in the retail business to private households. Most of the concessions granted by municipal authorities to operate local grids are also in the hands of Stadtwerke. Their share in electricity generation is only 12 percent, according to the latest available data from 2012. 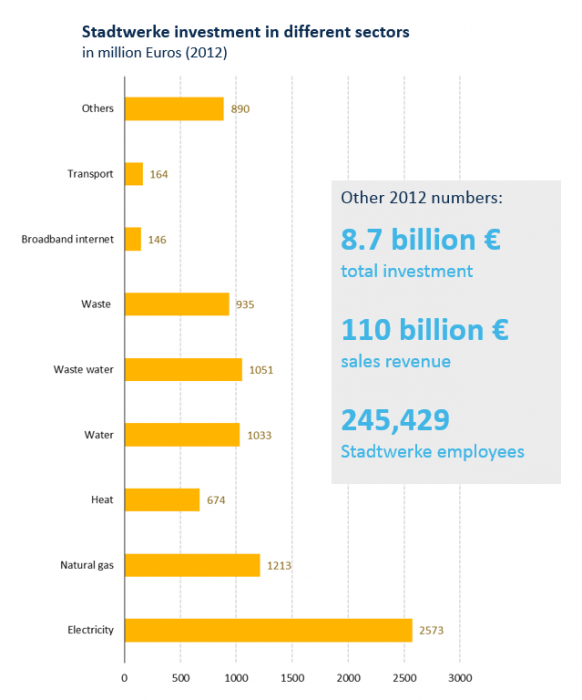 Generally, the Stadtwerke are able to keep their strong local customer base because they are popular: Many Germans trust them and welcome that profits stay in the local community.

Despite their common traits, municipal companies are extremely diverse. Some of them have been at least partly privatised. For example, Berlin’s former gas monopolist Gasag is today owned by E.ON, Vattenfall and French GDF Suez, but still a member of VKU. But by far most of the Stadtwerke are still firmly in the hand of local authorities.

Their size also differs widely. On one extreme, there are hundreds of tiny Stadtwerke with only a few dozen employees. Many of those strive to be competitive by seeking purchasing and organisational alliances, for example sharing their IT platforms. On the other hand, the big players are rather large utilities. The Stadtwerke Munich for example had a turnover of 6.3 billion euros in 2013. Their annual report and list of activities, in English, gives a good impression of the scope of Germany’s Stadtwerke with services ranging from public swimming pools to telecommunications. Some of the larger Stadtwerke have joined forces to reap economies of scale even further. Thüga, for example, is a network of about 100 local utilities. Its mission is to keep their Stadtwerke independent and competitive – for example, by pooling energy purchases. By some measures, the network is one of the country’s largest energy companies.

Overall, Stadtwerke are doing relatively well. Compared with their total number, local utilities running into serious economic problems are a rare sight. All larger Stadtwerke are profitable. Many cross-subsidise unprofitable local activities such as public transport with their income from more lucrative businesses such as energy. But a diverse portfolio provides flexibility, too. Usually, Stadtwerke are able to cut back on costly public services if they run into serious trouble.

However, some of the Stadtwerke failed to avoid the problems of the Big Four - albeit on a smaller scale. In 2011, Stephan Weil, then president of VKU, said the Stadtwerke would invest an additional six billion euros by 2020 and double their share in electricity generation to 20 percent if the German government decided to phase out nuclear energy – in which they hold virtually no stakes. As the phase-out became reality, municipal utilities embarked on an ambitious investment programme and many now face the same problems as the Big Four: Power prices have taken a dive and many new plants are in the red. That’s why the VKU, just like Germany’s largest utilities, is a proponent of a capacity mechanism that would pay fossil power plants for providing supply security.