Factsheet
The large German utilities have seen their earnings from producing and supplying fossil and nuclear power decline - this factsheet outlines the challenges the energy transition poses to their traditional business model and how they are faring as a result.

The German electricity market is dominated by four large suppliers that between them had a 67 percent share of the conventional power market in Germany and Austria in 2013. The “big four” – RWE, EnBW, E.ON and Vattenfall – are involved in primary power production, distribution and sales. Despite many smaller power providers in the market often offering cheaper consumer prices than the big four, German households are  reluctant to switch providers and the major utilities retain a dominant market position. But they have faced challenges as Germany shifts away from their core business – the centralised production and distribution of power from fossil fuels and nuclear energy – to a low-carbon economy based on power generation from renewables, a sector in which they continue to lag behind.

RWE is the country’s biggest power provider with 6.6 million customers in Germany and a 24 percent market share of sales to end customers and redistributors. In 2013, over half the power RWE produced in Germany was from lignite (52 percent) with hard coal accounting for a further 20 percent. Renewables made up one percent of RWE’s German power generation and nuclear 21 percent. RWE also operates a 330,000 km electricity distribution network and open cast lignite mines in Rhineland at Hambach (40 - 45 million tonnes per year), Garzweiler (35 - 40 million tonnes of per year), and Inden (22 million tonnes per year). 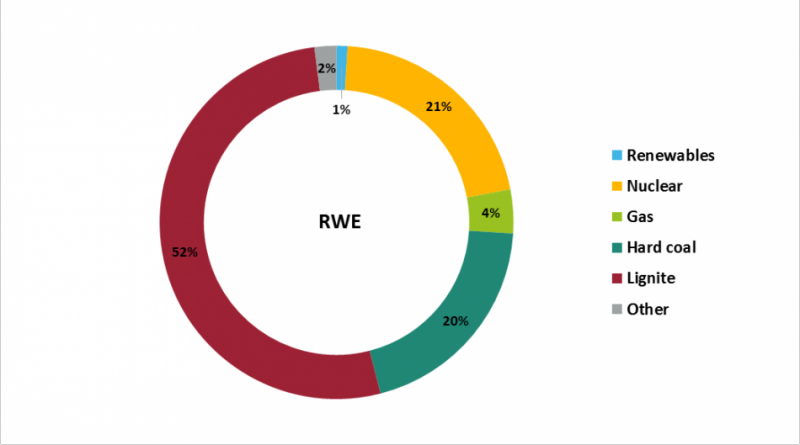 15 percent of RWE’s company shares belong to towns and cities in North Rhine-Westphalia (NRW) via a financial holding company (RWEB GmbH). Some cities hold further shares directly. Since RWE’s shares have lost value and the company has debts of 31 billion euros, shareholding municipalities in NRW are worried about losses and further debts.

E.ON supplies power to 5.26 million customers in Germany (2013). E.ON’s power generation is heavily dependent on nuclear, which accounted for 53 percent of its German power output in 2013, while renewables – mainly hydropower – made up 8 percent (See E.ON Geschäftsbericht 2013 p. 216 and table “Facts & Figures Generation”). On 1 December, E.ON announced that as of 2016, it would be spinning off its fossil and nuclear operations and focusing on renewables and distribution. E.ON operates 352,000 km, or 19 percent of the power distribution network. 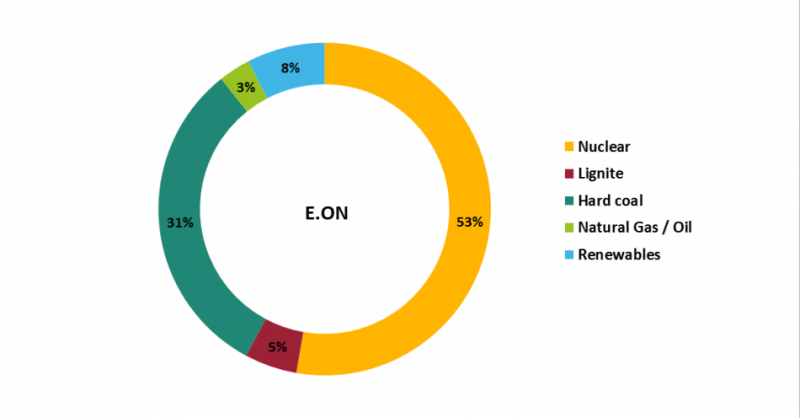 In 2013, EnBW announced its aim to increase its share of renewables to nearly 40 percent by 2020, focusing on wind and hydropower. EnBW operates the transmission and distribution grid (155,000 km) in Baden-Württemberg through subsidiaries.

The state of Baden-Württemberg owns over 99 percent of EnBW. 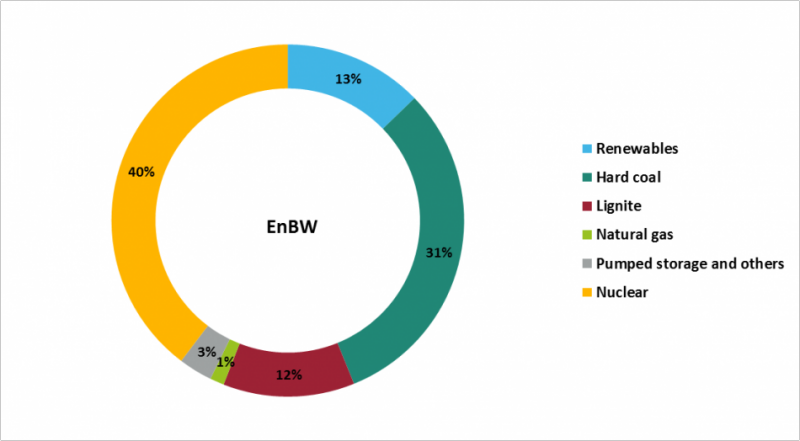 Vattenfall, owned by the Swedish state, is Germany’s fourth largest power provider, supplying 2.9 million power customers (2013) and employing 12,254 people in Germany. In 2013, Vattenfall generated 81 percent of its electricity in Germany from lignite, eight percent from hard coal, five from gas and four percent from hydropower. The company’s nuclear power stations were shut down in 2011.

Vattenfall owns and operates the electricity networks in Hamburg and Berlin.Vattenfall is the sole operator of five lignite opencast mines in the German Lusatia region (in the Eastern states of Brandenburg and Saxony). Their combined output was 63.6 million tonnes in 2013. The company was planning to extend two of the mines – Welzow-Süd and Nochten – when it announced that it was considering selling all its German lignite assets – which also include three lignite power stations in the region. 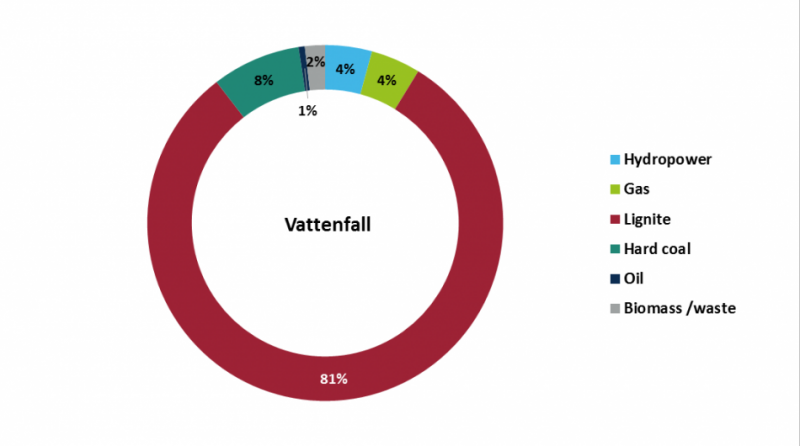 Many of the publically owned municipal utilities – or “stadtwerke” – that held regional monopolies over power supply were privatised during the 1990s. Some are now owned, or part-owned by the big four. But following the introduction of subsidies for green power, some municipal utilities have been renationalised, as councils and citizens have voted not to renew their contracts with private companies. Between 2005 and 2013, 72 new stadtwerke were founded.

The decentralised nature of renewable power generation and other alternatives to conventional power plants such as combined heat and power (CHP) have given the stadtwerke some advantages compared to the highly centralised, integrated structure of the big four. In 2013, publically owned municipal utilities operated power generation facilities with a capacity of 22.6 gigawatts, 13.5 percent of which was renewable power generation, with a further 44.4 percent from CHP, according to figures from the German Association of Local Utilities. 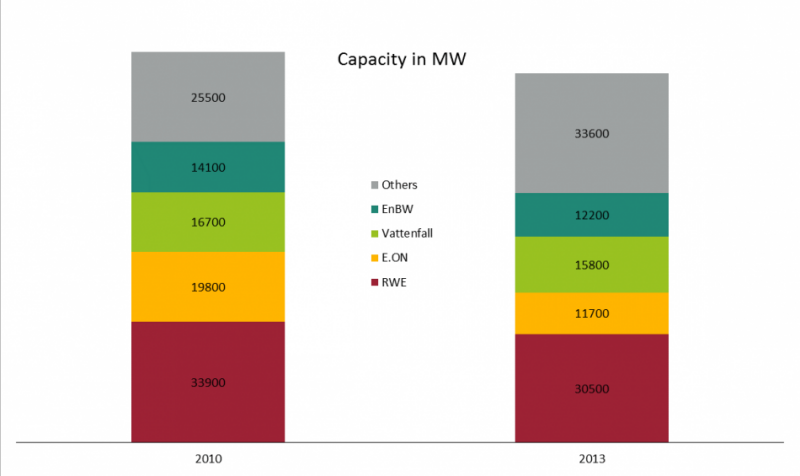 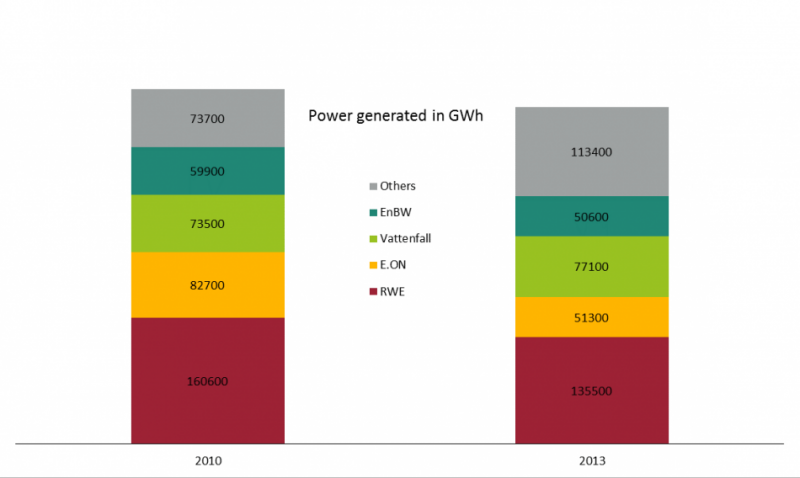 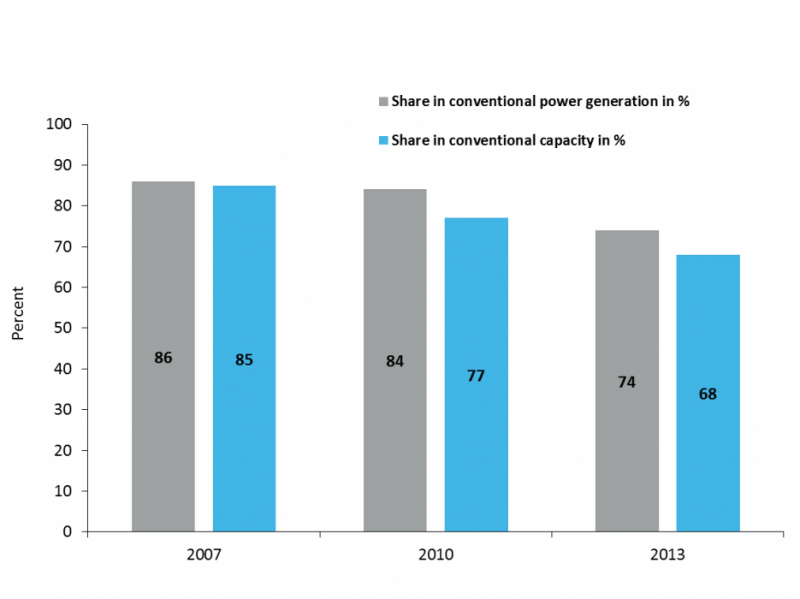 How have the big four fared in the Energiewende?

When Germany re-invoked the nuclear phase-out in 2011, Angela Merkel’s government forced the immediate closure of eight nuclear power stations, with each of the large four utilities having to retire two reactors (Table 1). Depending on the share of nuclear power in their energy generation mix, in some cases this meant a sharp decline in company profits and job cuts and power station owners reacted with legal proceedings against the German government. Vattenfall filed a claim for several billion euros in damages with the International Centre for Settlement of Investment Disputes (ICSID) in New York. E.ON and RWE filed a complaint with the German Constitutional Court. The cases are still pending. On 23 December EnBW also filed a claim against the German government and the state of Baden-Württemberg with the district court on Bonn.

Operators of nuclear power stations are required by law to put aside financial provisions to treat and dispose of nuclear waste, and for the dismantling of retired power plants. In 2013, these provisions amounted to 36 billion euros, most of which was earmarked by E.ON (14.5 billion euros), which owned the largest number of nuclear operations in Germany, and RWE (10 billion euros). However, as the utilities’ financial situation is hit by falling revenue from conventional power generation there is concern among politicians and the public that these provisions may not be available for their intended purpose. E.ON’s split also sparked speculation that the company could launch a “bad bank” utility combining all the company’s loss-making operations, including the nuclear provisions, and ultimately fail to pay for the nuclear waste storage – a concern that E.ON repeatedly said to be unfounded. A leaked proposal from the Environment Ministry and the Economy Ministry suggested that the utilities pay almost half of the provisions into a state-run fund, thereby ensuring that the money would be available for its purpose in case one of the large companies went bankrupt (See CLEW article “Proposal for nuclear fund seen by some as no-confidence vote in utilities”). 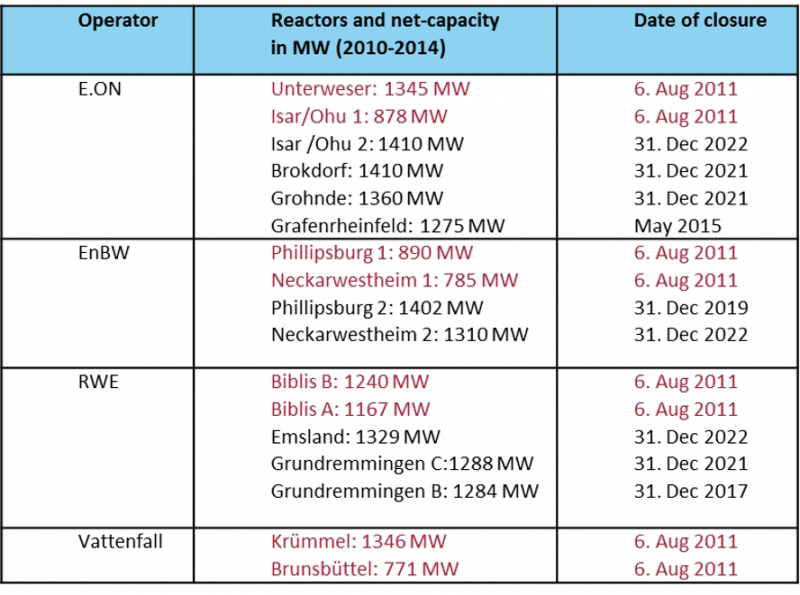 Besides the nuclear phase-out, Germany’s shift to renewable energy sources, driven by the Renewable Energy Act (Erneuerbare Energien Gesetz, EEG) has taken its toll on the large utilities’ balance sheets. The share of renewables in gross power generation has grown from 6.6 percent in 2000 to 25.8 percent in 2014 (AG Energiebilanzen, Stromerzeugung nach Energieträgern), increasing competition in the power market. More and more households produce electricity with solar roof installations, and it is often cheaper for them to use the power themselves, meaning they are no longer stable customers for the power providers. In 2012, German companies and private households generated 56.7 terawatt hours, or 11 percent of the total national power demand (from both renewable and conventional sources) for their own consumption, up from 8 percent in 2008. In 2012, E.ON CEO Johannes Teyssen said in an interview: “I am convinced that our market share in Germany will have to shrink. It is not possible to maintain the same market share in a decentralised energy world.” E.ON’s electricity generation fell by 38 percent between 2010 and 2013.

The growth of renewable power has not only increased competition in the market, its low production costs – since it doesn’t require fuel or much manpower – has also forced down the wholesale electricity price (See the CLEW Merit Order Effect Factsheet). The average wholesale price for power on the spot market fell 11 percent to from 42.60 euro/MWh in 2012 to 37.78 euros per megawatt-hour in 2013 (See Figure 8). 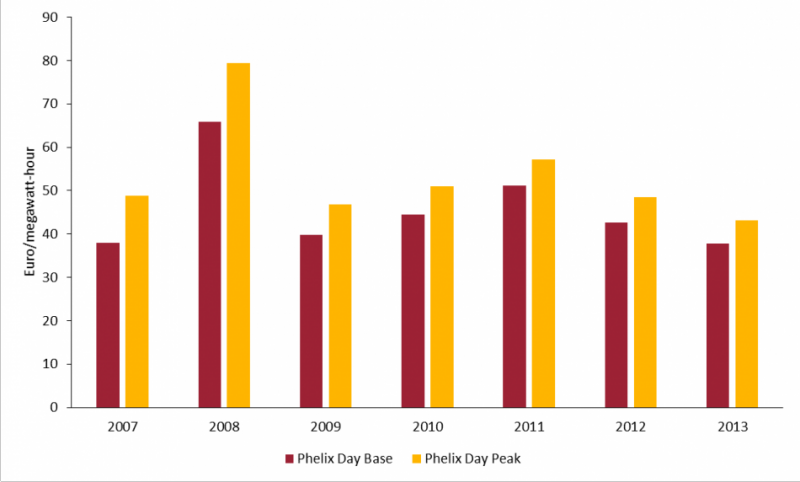 The growth of renewables, overcapacities in the European electricity market, falling power demand, falling wholesale power prices and the general economic downturn are among the reasons why utilities have fared less and less well in Germany in recent years. Operators of hard coal- and gas-fired power stations earned less, resulting in many gas-fired power stations being temporarily mothballed.

The big four utilities’ aggregated market share of conventional power decreased by 6 percentage points compared to 2010. Because of more power fed into the system by renewable sources, the overall conventional market volume decreased by 9 percent and the amount of power the big four produced shrunk by 16 percent during the same period, according to the Federal Network Agency (Bundesnetzagentur Monitoring Report, p.30).

In 2011, the year in which the nuclear phase-out was re-introduced, the big four utilities recorded a fall in their company profits, with E.ON reporting a loss of 1.9 billion euros after presenting profits of 6.3 billion euros the year before. Reasons were not only the absent profits from nuclear power generation that had been shut down, but also the required provisions for nuclear waste management (see above) and losses in the gas sector.

In 2013, trade union Verdi claimed that some 20,000 jobs in the energy sector were at risk. All four major utilities announced job cuts after the first nuclear power stations were shut down, amounting to more than 15,000 if all lay-off plans are followed through by 2016. In November 2014, RWE announced that it would be reducing its workforce by 6750, with two thirds of the jobs to be cut in Germany. By the end of 2013, the four big utilities declared 16,128 less employees in Germany in their annual reports compared to 2010, with E.ON having made the biggest cut of 11,487 jobs while EnBW only had 628 fewer jobs than in 2010 (See Figure 9). E.ON’s job cuts in Germany between 2011 and 2013 are mainly due to the closure of operations in Munich and the sale of shares in other generation facilities like Thüringer Energie, E.ON Westfalen Weser and E.ON Energy from Waste, as well as a new policy aimed at a company-wide cost-cutting and increased efficiency, called E.ON 2.0 (See annual reports, 2012 and 2013). 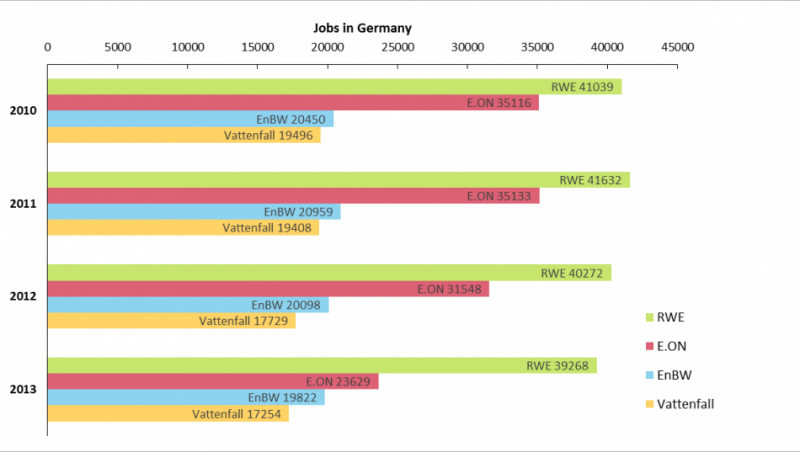