Factsheet
The German public increasingly puts climate action at the top of its policy priorities and remains strongly in support of the transition to a low-carbon and nuclear-free economy. The picture across Europe is more diverse, although climate is becoming a top issue almost everywhere. Russia’s war against Ukraine has caused a shift on some key energy questions and it remains to be seen whether these are temporary. This factsheet provides a summary of major polls measuring citizens' views on climate action and their acceptance of the energy transition.  [UPDATES AEE acceptance survey to 2022]

Russia’s war against Ukraine and its effects on energy prices and deliveries has sparked shifts in opinion on some key energy issues. Inflation has increasingly taken over as the top concern for citizens, but the crisis has also increased acceptance of renewables among the population.

In a survey by the organisation More in Common, rising prices topped the list of most important topics Germany is facing, with 45 percent of respondents naming inflation as one of the three most important challenges, followed by climate and environment with 38 percent and affordable housing (28 percent).

A McKinsey survey from July 2022 showed that concerns about rising prices are becoming entrenched. Around 48 percent of respondents said their biggest concern at the moment was inflation - a significant increase on previous issues of the survey. 10 percent named extreme weather events/climate change.

Similarly, inflation has topped the "What worries the world" survey by IPSOS for some time (44% inflation, 35% poverty and social inequality, 32% climate change in Germany in August 2022).

Germans also increasingly support extending nuclear power in Germany. Infratest dimap’s Deutschlandtrend poll from August 2022 showed that 41 percent support the extension of the remaining plants for several month, while another 41 percent would support the use of nuclear power also in the long term. Only 15 percent of respondents said the plants should be switched off as planned on 31 December 2022.

Twice a year, the European Union surveys thousands of people across the member states for its Standard Eurobarometer. The 97rd edition in summer 2022 was carried out among residents from the 27 member states and several other countries and territories. Included in the standard set of questions is “What do you think are the two most important issues facing the EU at the moment?” The report also includes country factsheets with key data from each member state. For Germany, it shows that 28 percent of respondents consider climate change the most serious problem facing the world, a much higher proportion than the EU average. In addition to the Eurobarometer, the European Investment Bank (EIB) – which calls itself the world’s biggest multilateral financial institution and one of the largest providers of climate finance – has annually commissioned its EIB climate survey since 2018. The 2022/2023 edition, to be released in two parts, was conducted in partnership with French polling company BVA. In all, approximately 26,000 respondents aged 15 and older in 30 countries were surveyed August 2022. The survey was conducted in the EU countries and also in the UK, China and the U.S.

The first part of the survey, published on 27 October 2022, showed that a majority of people from the European Union (66%) say that the war against Ukraine and its consequences on the price of oil and gas should lead the bloc to speed up the green transition by reducing the consumption of fossil fuels. It also showed that 57 percent of Germans say climate change is one of the three biggest challenges that people in the country are currently facing, a notable 16 percentage points above the European average (41%) and higher than in any other EU member state. In other EU countries, results range from 8 percent in Latvia to 55 percent in Luxembourg.

Key phrasing for measuring citizens’ concern for climate action: “What do you think is the most important problem in Germany at the moment?” 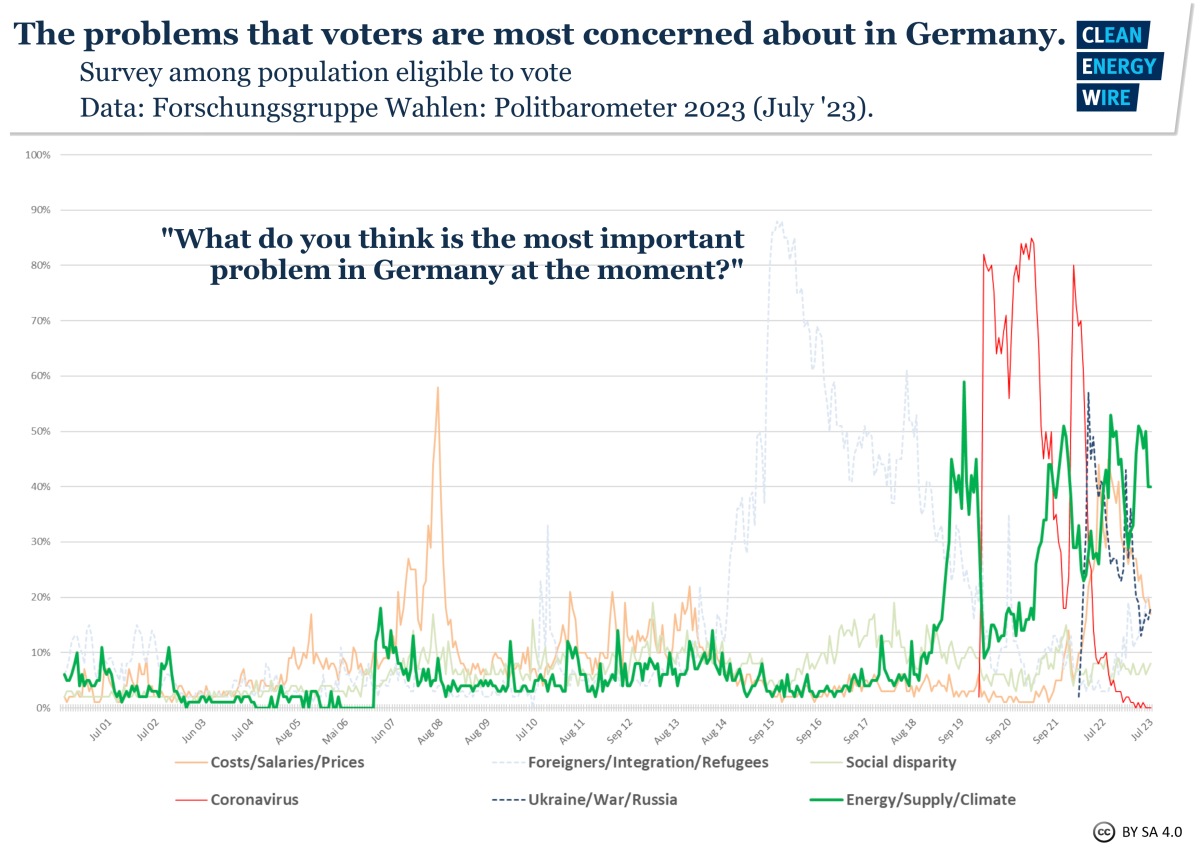 Pollster Forschungsgruppe Wahlen has conducted its representative Politbarometer survey since 1977, and once or twice per month asks respondents to name the most important problem Germany is currently facing. Environment/climate/energy transition have stayed relatively level for more than a decade, when in 2018/19 it showed an increase in voter concern that catapulted it to the top of the list until the coronavirus pandemic hit in 2020. This change was driven by exceptionally warm summers with drought, the Fridays for Future climate protest movement and intense public debates about policies, such as the coal exit. The coronavirus pandemic caused the issue to drop significantly for several months, but it has since come back to top the list. However, the fallout of Russia's war against Ukraine has brought worries about inflation to the forefront by mid-2022.

Key phrasing for measuring citizens’ concern for climate action: “On this list are various problems facing our country today. Please indicate in each case how important you think the problem mentioned is.”  -- Reply: “very important” The Federal Environment Agency (UBA) and the environment ministry (BMU) have conducted their environmental awareness study every two years since 1996. In 2019, pollster Forsa carried out an interim survey.

The last regular version (Umweltbewusstseinsstudie 2018) was published in 2019. For the representative survey, 4,000 German residents aged 14 and older were asked to fill out online questionnaires in two parts, as there were many questions. As the title suggests, respondents were asked questions about a broad range of environmental topics, from climate action and the energy transition to agriculture and transport. Eighty-one percent of respondents in 2018 agreed somewhat or fully with the statement that the energy transition in Germany progressed too slowly to effectively protect the climate.

The government-appointed expert commission tasked with monitoring the progress of Germany’s Energiewende has in recent years regularly warned of fading citizen acceptance of key energy transition infrastructure projects. The installation of new wind turbines or major power transmission lines has faced increasing local resistance, which endangers the success of the transition, say the experts. At the same time – and this is no contradiction, they say – general acceptance of wind and solar power expansion or the need for new power lines remain high in Germany – mostly by “passive supporters.” The problem, according to the government advisors, is the “loud minority,” which campaigns against individual projects across the country.

The outcome of surveys on citizens’ support for the energy transition often depends on how the questions are phrased and what responses are possible. Below is a list of several major and recurring surveys, including the key phrasing:

Key phrasing for measuring citizens’ support for Energiewende: “Increased use and expansion of renewable energy is…”

In December 2022, the AEE's representative annual survey was conducted by online pollster YouGov, which approached 1,026 people aged 16 and over. The AEE added up the categories “extremely important,” “very important” and “important” to arrive at the conclusion that “at 86 percent [sic], the population's support for renewable energies and thus for the energy transition is very high.” The survey found that Russia's war against Ukraine and the energy crisis has pushed acceptance for renewables. For example, for example, 20 percent of respondents said they were not a fan of wind energy before the crisis, but now believe it should be expanded. It also found broad support for renewable energy installations in interviewees’ direct neighbourhoods (66% good/very good), which increased further if respondents already had experience with such installations.

The survey builds on the comprehensive Social Sustainability Barometer, which the Institute for Advanced Sustainability Studies (IASS) had published in recent years. The question catalogue has been changed for the new version.

The Ariadne project offers more details and visualisation of survey results in its online version. It offers insights into specifics of acceptance of wind power expansion by local residents, how respondents think about European climate targets, and their attitude towards CO2 pricing.

Key phrasing for measuring citizens’ support for Energiewende: “[requested; KfW had not replied by the time of publication] 5. Other recent surveys on climate and energy

German businesses, NGOs, research institutions or ministries regularly publish survey results on key climate action and energy transition issues. Most of these are one-off publications and not part of a longer series. Here are several recent examples:

The representative Deutschlandtrend survey which pollster Infratest dimap regularly conducts for public broadcaster ARD showed Environment/Climate at the top of “most important political/policy problems” in June 2021 (28%, followed by immigration, social injustice and coronavirus with 19% each). 32 percent of respondents said they didn’t want to restrict their daily lives to protect the climate. When faced with the choice of “in the right direction”/”in the wrong direction”, 75 percent said a stronger increase of petrol prices goes in the wrong direction in terms of climate action measures. However, 65 percent supported higher prices for flights and 57 percent supported a 130 kilometres/hour speed limit on the Autobahn.

German citizens would like to see their municipalities act more on climate change, according to a survey commissioned by the Bertelsmann Foundation and published in January 2021. More than half of the citizens surveyed said their local authorities attached only medium importance to climate protection (55%) and climate adaptation (54%) measures.

A large majority of Germans are prepared to make significant lifestyle changes to help protect the climate and environment, according to a survey commissioned by Friends of the Earth Germany (BUND) and conducted by the Kantar Institute, published in December 2020. Eighty-six percent of about 1,000 respondents answered ‘yes’ to the question “Are you prepared to make significant lifestyle restrictions in the future to protect the climate?”

Climate policy could be a decisive issue for the vast majority of voters in Germany's parliamentary elections in 2021, a representative survey conducted by pollster YouGov for solar power industry lobby group BSW Solar found in December 2020. Nearly three-quarters (73%) of respondents said climate policy could be important (32%) or very important (41%) when deciding who to vote for.

The role of global warming and climate action in German media has grown constantly over the last year, putting it on the agenda of an increasing number of citizens, the Cologne Institute for Economic Research (IW Köln) found in August 2020. While about one in four Germans said in 2015 that they did not regularly receive information on climate topics, this number fell to only one in nine people five years later, with most people using television or the TV station's media libraries to inform themselves.

Climate action remains a priority for most people in Germany even as the effects of the coronavirus pandemic are challenging citizens on many levels, the economic research institutes ZEW and RWI found in a survey of German households published in July 2020. More than 90 percent of the respondents said the topic's importance has remained constant or even increased since the beginning of the year.

Majority of Germans support renewables use and expansion – survey