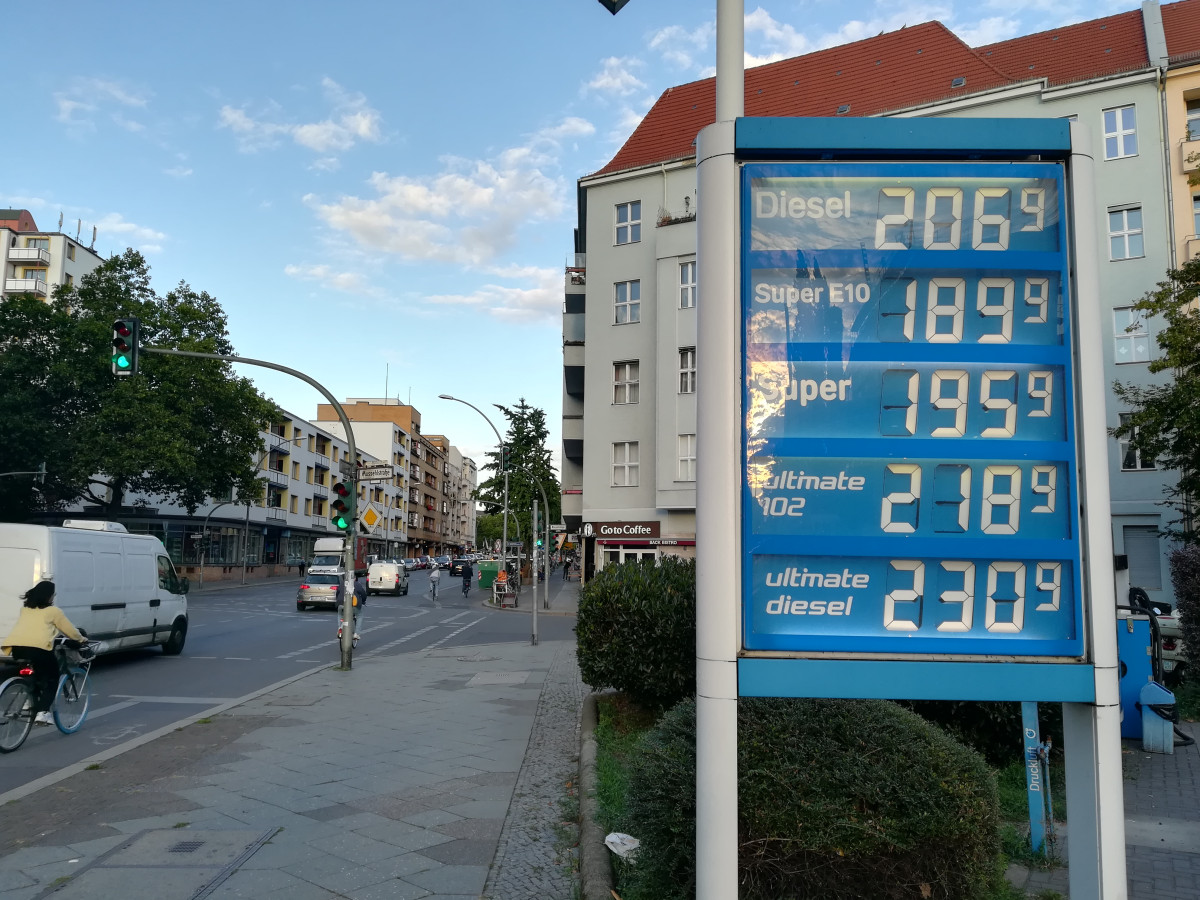 Prices at German petrol stations are starting to rise after a scheme to lower prices has run out. Photo: CLEW/Wettengel.

Rising energy and food prices and climate change top the list of main worries in Germany, several surveys show. Investing in renewables by a wide margin is seen as the best way to achieve energy independence from Russia by respondents to a survey conducted by More in Common in four large European countries (France, Germany, Poland and the UK). Another survey commissioned by Norwegian energy company Statkraft shows that the current crisis is a boost for the acceptance of the energy transition.

Rising energy and food prices, largely caused by the fallout of Russia’s war against Ukraine, are among the biggest worries for people in Germany and other European countries. However, surveys show that climate change is often equally important, and the transition to an energy system based on renewables is seen as a key solution to both crises.

The organisation More in Common conducted its survey on rising prices for food and energy in late July. It found that 97 percent of people in all four countries were feeling the effects of rising prices and more than seven in ten people said they were struggling or just coping. Most people did not trust any political party to deal with the crisis but opposition parties were making gains everywhere, including populists and authoritarian parties. Many expected to see protest or even upheaval in the coming months.

However, the organisation says the crisis has not diminished people’s resolve on climate goals. The respondents blamed governments’ failure to invest in renewables sooner and agreed that delaying commitments to fight climate change would only increase energy bills in the medium and long term. 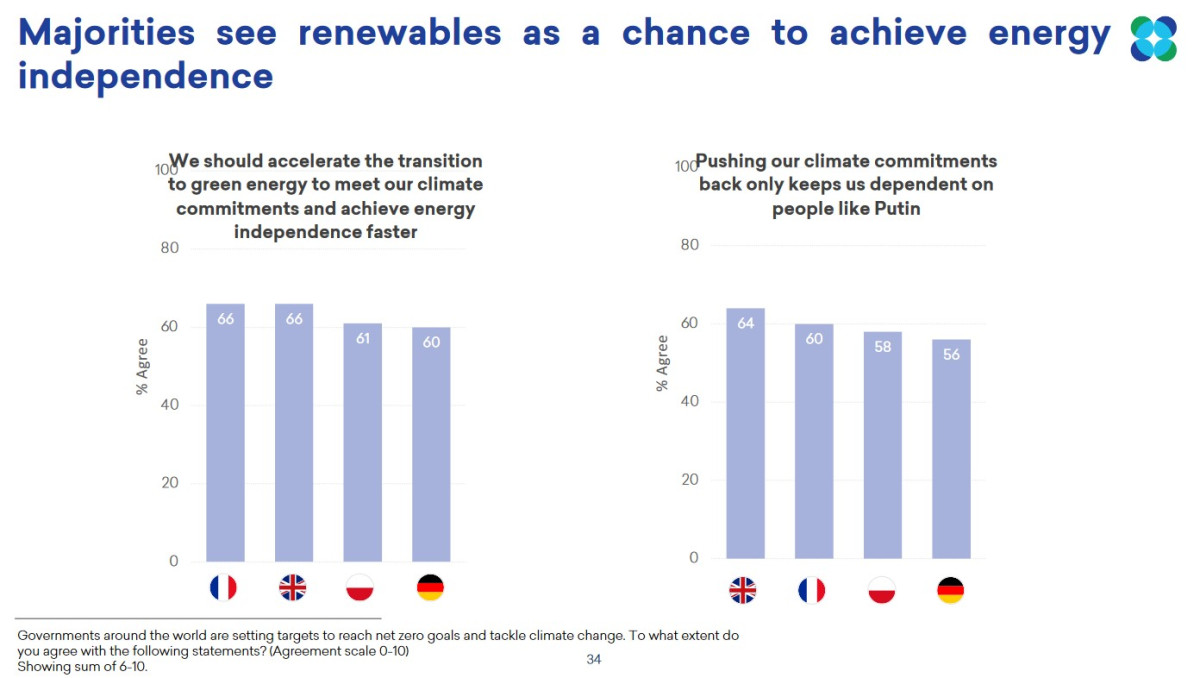 In Germany, More in Common, together with pollster YouGov, asked 2,138 adults. Here, 99 percent said they were feeling the effects of rising prices. The issue also tops the list of most important topics Germany is facing, with 45 percent of respondents naming inflation as one of the three most important challenges, followed by climate and environment with 38 percent and affordable housing (28 percent).

Three-quarters of respondents were in favour of speeding up the rollout of renewables. Sixty-two percent would accept higher prices now if that would mean a decrease in energy bills in the long term. However, only 49 percent said they would accept further rising energy prices if this helped Germany reach its climate targets sooner. Support for political relief measures, such as lowering the VAT on energy and food or introducing a price limit for energy, was high (above 80%), but only 33 percent said they supported energy rationing. Solar and wind power were viewed as reliable energy sources, oil and gas less so.

Pollster Forschungsgruppe Wahlen has conducted its representative Politbarometer survey since 1977, and once or twice per month, it asks respondents to name the most important problem Germany is currently facing. Environment/climate/energy transition have stayed relatively level for more than a decade, when in 2018/2019 it showed an increase in voter concern that catapulted it to the top of the list until the coronavirus pandemic hit in 2020. The issue has stayed among the top concerns over the past years. In August 2022, it once again led the list of concerns (43%), followed by costs/salaries/prices. 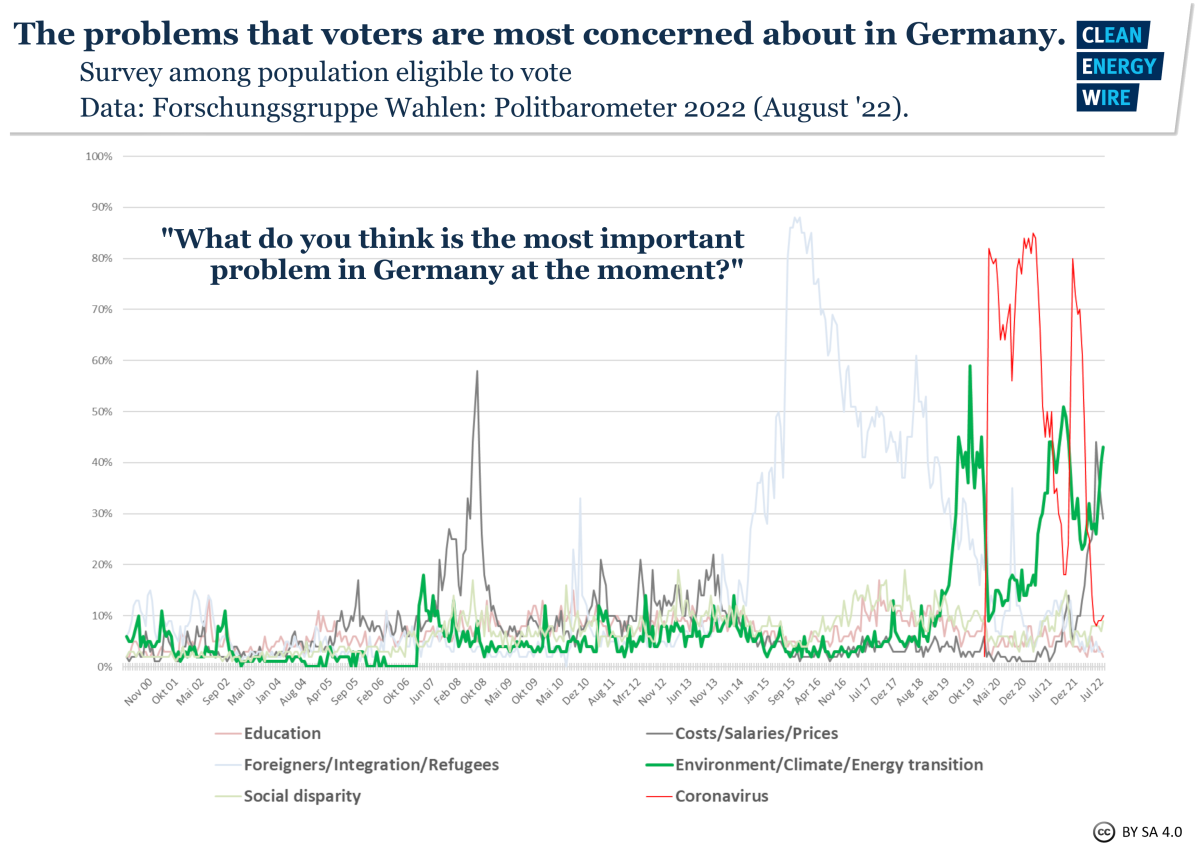 Norwegian power company Statkraft published survey results, which showed that the acceptance of renewables in Germany was increasing as a result of the energy crisis. Sixty-three percent of respondents said renewables had become more important due to the crisis, while only eight percent said this was not the case. Two-thirds said that Germany should have accelerated the rollout of renewables some time ago. Eighty-eight percent supported the construction of solar facilities within five kilometres of their home or were neutral (81 percent expressed support for wind power), Statkraft said.

Besides Germany, the survey was also conducted in the UK, France, Spain, Italy, the Netherlands, Ireland, Norway and Croatia in May 2022.