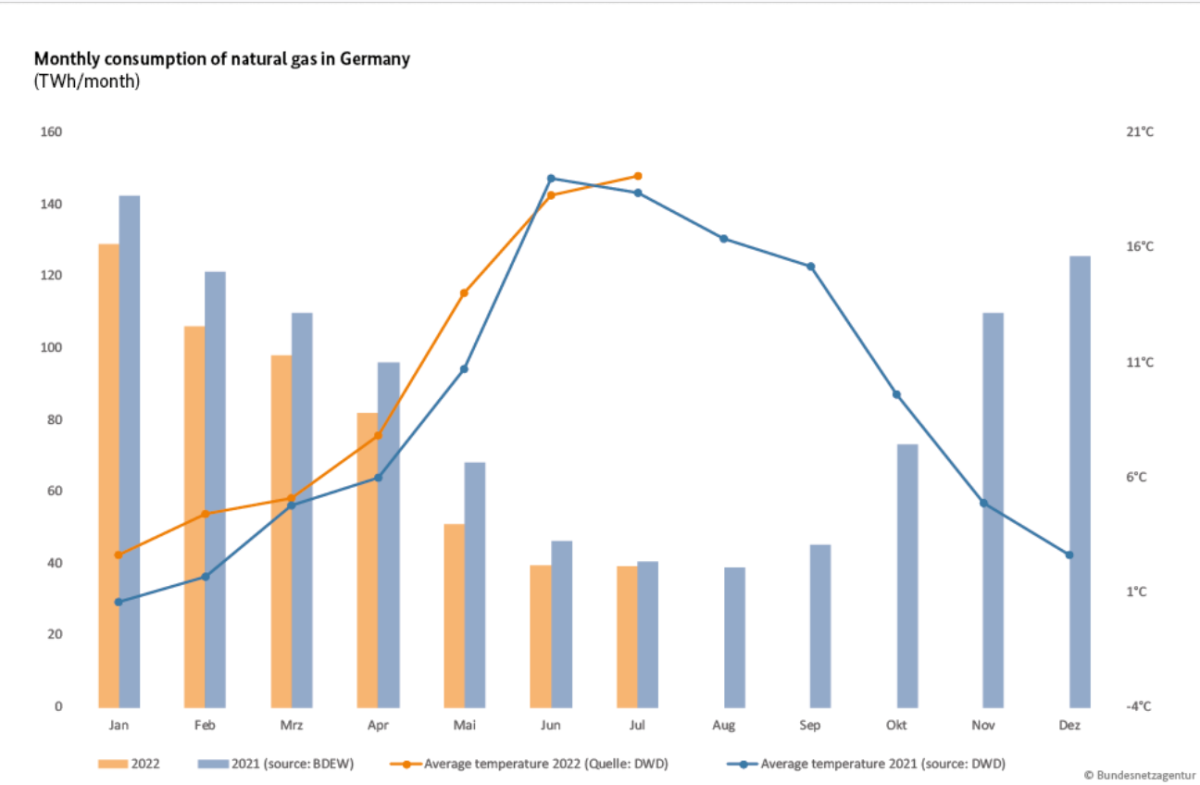 Germany's gas consumption in 2022 so far has been much lower than in the year before, owing to a large part to warmer weather. Source: BNetzA

The German government has introduced a package of energy saving provisions for businesses and state entities that will take effect in September, just as key relief measures run out and citizens are set to face higher prices for fuels and public transport. The three-month tax reduction on transport and heating fuels, such as petrol and diesel, as well as the 9-euro public transport ticket expire on 31 August - meaning rising costs for energy will be felt even more strongly by households and companies. The government therefore urged customers to reduce consumption to save both energy and money, urging a "nation-wide effort" to ensure severe effects of the energy supply crisis are avoided and dependence on Russian fossil fuel imports ends.

Germany and Europe are grappling with the fallout of Russia’s war against Ukraine on energy supply and costs. Prices of oil, gas and coal have risen sharply in recent months, as many countries have begun phasing out Russian supplies and are instead searching for alternatives on world markets. The scramble for alternative gas supplies and fears of yet more cuts to delivieries from Russia have both greatly driven up prices, which are set to cause severe financial challenges for households and businesses in the months ahead.

Germany's economy and climate minister, Robert Habeck, said finding alternative sources could be only one part of the answer to how to overcome dependence. “Saving much more gas will also be a substantial part of the solution: in public institutions, in business and in as many private households as possible,” the minister stressed. Saving gas would also mean saving money, a measure that could become increasinlgy important for many consumers once support mechanisms have expired at the end of August.

At the end of August, Habeck's ministry (BMWK) published a range of energy saving measures the government had agreed on. The measures, which for the most part had already been publicly debated in the past weeks, will apply to all parts of society - from state-run institutions over large and small companies to individual households, with further help from labour unions, the skilled drafts and trades, industry associations and civil society groups. “A nation-wide effort is needed” to ensure severe effects of the energy supply crisis are avoided and dependence on Russian imports ends, the ministry said. “Legal obligations and voluntary efforts will complement each other,” it added. The regulation is primarily aimed at reducing gas consumption for heating and electricity production, and serves to support the government’s larger ‘work plan' for energy efficiency that includes financial incentives, targeted support and regulatory changes.

Households consumed about one third of Germany’s gas in 2021, mainly for heating and warm water, and 40 percent of all households in the country rely on gas for heating. The government has, since early on in the energy crisis, urged citizens and small businesses, including restaurants and retail shops, to cut consumption wherever possible – not least to reduce their exposure to the expected price explosion. In June, it launched a campaign called ‘80 million together for energy change', in which people were encouraged to help reduce Russia’s grip on the energy sector. The campaign included advertisements in public spaces, online portals and social media, as well as a phone hotline, events and stakeholder dialogues.

The long list of efforts that had gradually emerged over the past months was ultimately greenlighted by the government in late August. Split into short-term and long-term responses, some of the measures take effect by 1 September and will last for at least six months, while others, for which consent by the council of German states (the Bundesrat) is still pending, will come into effect in October and are planned to remain in place until 2024, thus covering the two next heating seasons. “A focus will be on measures implemented by the state in order to act as a role model and provide orientation regarding feasible and practicable measures,” the ministry said. Long-term measures would not only be aimed at averting short-term supply bottlenecks but also improve energy efficiency in the years that follow.

A survey of Germany’s 16 state governments, carried out by news magazine Der Spiegel, found that several states had already started working on energy saving measures that go beyond the federal government’s package. Such measures included mandating shared use of buildings of different administrations, lower heating and partly warm water cuts in offices, and the complete closing of public and administration buildings during holidays. State employees were additionally urged to replace business travelling with online meetings and use public transport or shared driving options whenever possible.

Energy industry association BDEW generally welcomed the push for greater energy saving and efficiency regulation, but criticised that parts of the decree could not be easily implemented by businesses. Providing customers with detailed price information and consumption data would prove very difficult for energy companies, and accurate estimates of expected costs almost impossible to make. Tailor-made information for individual customers would bind much more resources than generalised information brochures and thus be a better solution, the BDEW argued.

NGO Environmental Action Germany (DUH) commented the measures would not address the root causes of the possible energy shortage, namely the building stock’s energy consumption. Tighter minimum efficiency and insulation standards alongside quicker retrofitting would be the only way to reduce consumption in a sufficient and lasting manner. The recent reduction of retrofitting support payments would thus point in the opposite direction of what is needed, the DUH said. 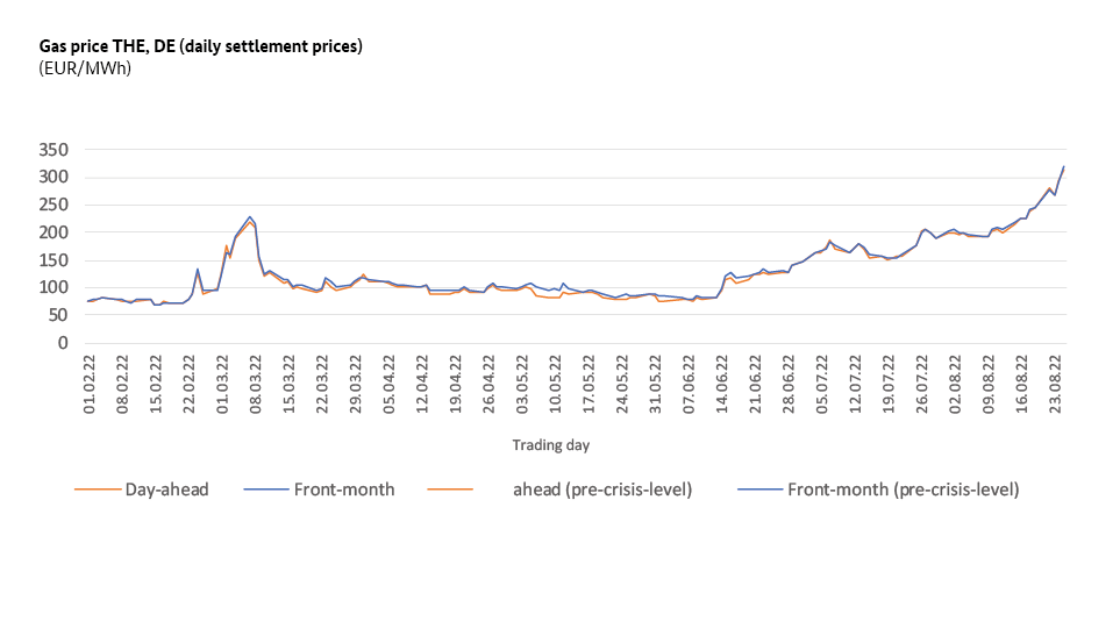 The 9-euro offer – set to run out by the end of August – was widely used in Germany with tens of millions of tickets sold. The offer helped stop the Covid-pandemic induced move towards more car use at least for several months, a survey by the German Aerospace Center DLR, which also conducts transport research, showed. However, the ticket was criticised as a short-term measure which would not help incentivise a more permanent switch from individual car use to public transport. In addition, transport associations have warned that even higher fares could follow the end of the 9-euro ticket.

A possible follow-up offer for German citizens is heatedly debated. Finance minister Christian Lindner cautioned in an interview with public broadcaster ARD that an extension “would cost 14 billion euros”. This money would be lacking elsewhere for education or for investments in the rail network. From Lindner's point of view, this would also be “not sustainable” and in the end would "also not lead to ecologically responsible decisions”. There might be regional offers popping up here and there. The ruling Social Democrats (SPD) in the city state of Berlin reportedly plan to extent the 9 euro ticket until the end of the year for the inner city area.

Together with the 9-euro ticket, a three-month tax reduction of fuels like diesel and petrol helped dampen inflation in Germany over the summer. The end of the measures could have the opposite effect, as prices at the gas station are set to rise again.

In addition to the public transport ticket, the government had decided to temporarily cut energy taxes to the EU-wide minimum level in order to relieve consumers of high energy prices, resulting in a 14-cent-per-litre reduction for diesel and a 30-cent-per-litre cut for premium petrol over a three-month period. Initially, many had feared that gas stations would pocket the discount, but research showed it was largely passed on to customers. However, it was criticised as helping the wealthy rather than low-income households which often do not own a car or – if they do – a rather small or efficient one which they already use as little as possible. In addition, the fuel discount was criticised as ecologically counterproductive: it did not encourage people to use less petrol and diesel.