In the media: Why Germans support the Energiewende / Power export record

The EU Commission’s proposal for carbon leakage prevention after 2020 misses opportunities to promote efficiency and low-carbon innovation in industries like steel and cement, which are CO2-intensive, researchers of the Climate Strategy network led by DIW say in a report. By continuing to allocate free CO2 allowances to these sectors under the European emissions trading system, the Commission reduces incentives for innovation and modernisation, a DIW press release says.

Read the DIW press release in English here and the report on climate protection in energy intensive industries here.

In the first six months of 2015, Germany exported more power than ever before, a preliminary analysis by Berlin think-tank Agora Energiewende* shows. Electricity totalling 25 terrawatt-hours (twh) was sent abroad, up from 19 twh in the first half of 2014. Power demand from abroad increased because the rise in renewable energy production has pushed prices lower, Agora Energiewende concludes. The share of renewables in German power consumption rose to an unprecedented 31.4 percent, Agora Energiewende says. Old hardcoal-fired plants had to restrict power generation more often, but unfortunately they were trying to make up for it by exporting more of their power abroad, crowding out gas-fired plants in the Netherlands and Italy.

"Government wants to give more support to offshore wind power"

The German government could increase the amount of new offshore wind capacity to be built by 2020 from 6.5 to 7.7 gigawatts, writes Christian Schlesiger in the WirtschaftsWoche, citing government sources. Offshore wind power was long regarded as an expensive renewable power and expansion targets were reduced when the federal government passed the new Renewable Energy Act in August 2014. But because the first two existing offshore wind parks, Alpha Ventus in the North Sea and Baltic 1 in the Baltic Sea have produced more power than projections had anticipated, the ministry is now considering raising the target, Schlesiger reports.

Read a short online verison of the article in German here.

"Why Germans support the Energiewende"

92 percent of Germans support the energy transition (Energiewende), a poll by the Renewable Energies Agency reveals. A chart by Strom Report, using the findings of another survey by PricewaterhouseCoopers among 1,015 people, shows their different reasons for supporting the move to a low-carbon economy and a nuclear phase-out. See the chart below for the findings. 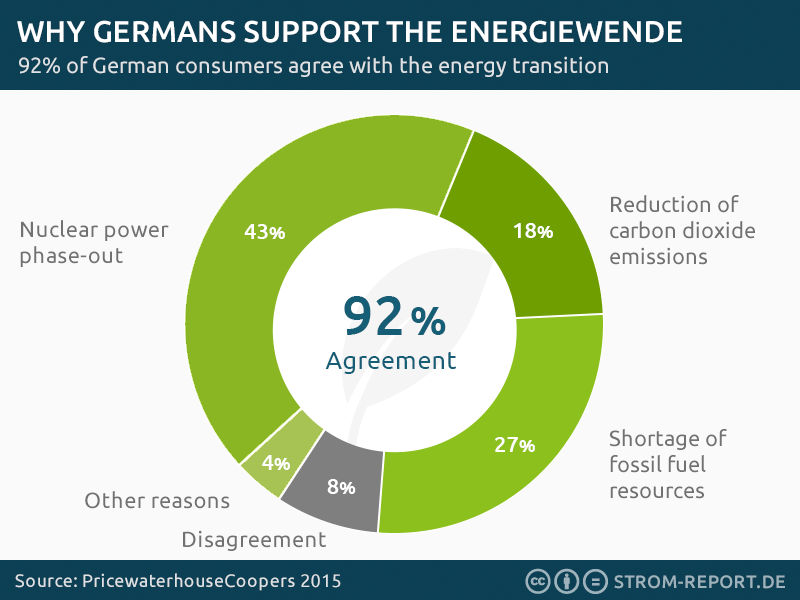 "Storage instead of coal"

The Energiewende is reaching a stage where it is necessary to decide once and for all whether we want a decarbonised, decentralised energy system that incorporates fluctuating renewable energies or whether we want to keep the centralised, inflexible system of fossil power, writes Clemens Triebel, co-founder and chief visionary officer at battery company Younicos in a guest article for Tagesspiegel. If choosing the first option, Germany should use battery storage and intelligent power management software which is able to balance out fluctuation in the power grid, Triebel says. Unlike conventional power stations that can only increase and decrease generation by few percentage points, large battery systems can be fully charged or discharged and thereby save a lot of conventional capacity. Triebel reckons that 200 power storage units, each the size of a sports hall, distributed across Germany, could provide enough back-up power for windy and sunny days.

See a CLEW dossier on technologies for the Energiewende here.

Pumped hydro power plants should be rewarded through financial incentives for their high potential as large and flexible storage facilities and their ability to provide system-stabilising services for the power grid in the Energiewende, Dow Jones Newswires writes, citing the findings of the Dena initiative “Pumped storage – partner of the Energiewende”. The storage plants should be relieved from grid fees and remuneration for their contribution to stabilising the grid should be increased in the long term, the initiative suggests.

Read the Dena press release in German here and the paper here.

An alliance of 30 photovoltaic (PV) companies and industry associations are advocating an end to trade restrictions for PV modules from China, solarserver.de reports. The “Solar Alliance for Europe” includes utility EnBW, German Engineering Association VDMA and consumer protection group VZBV who say that solar power could be 10 percent cheaper in Germany if it wasn’t for the customs duties that Chinese companies have to pay when importing PV modules to the EU. As PV development had fallen far behind the targets of the German government, the import tariffs were harming the energy transition and the climate as well as consumers, the alliance says.