Most Germans say economic growth no justification for neglecting environment

A clear majority of people in Germany say that the environment must not be damaged in order to increase economic growth, a major survey by the country's environment ministry (BMU) has found. In the Environmental Consciousness Study 2019, 71 percent of respondents disagreed with the statement "Nature must not stand in the way of economic development", up from 65 percent in 2017. At the same time, the share of people saying environmental protection needs to cope with less money in times of economic crisis dropped from 62 to 46 percent. "Environmental protection is winning more and more support in the population," environment minister Svenja Schulze said, arguing that this will be a crucial trend for policymakers "who seek to protect our means of livelihood."

The survey also revealed an unbowed commitment to the energy transition, with 60 percent saying they believe the shift to renewable energy sources is the right thing to do, while just 8 percent opposed it. The share of Energiewende supporters has remained largely constant over the past decade, with 63 percent backing it and 26 percent saying they are against it back in 2011. Moreover, most people in the country also back the expansion of onshore wind power, which has struggled with bureaucratic hurdles and lawsuits from regional opponent groups over the past few years. Seventy percent said they would endorse or at least accept more wind turbines spread across the country, with that figure rising to 78 percent for wind turbines at sea. According to the survey, the most favoured renewable energy sources are roof-mounted solar pv installations, of which 93 percent of respondents said they would welcome an expansion of.

Climate action has remained a priority for most people in the country even as the coronavirus pandemic continues to dominate the public agenda. The debate around wind power acceptance has repeatedly flared up in the recent past, contributing to the industry's worst slump in 20 years. It has led to calls to make public  acceptance a key task of future energy transition policies. However, both the central government and Germany's federal states have found an agreement regarding onshore wind power expansion rules, sparking optimism that the industry can return to sizeable expansion levels soon. 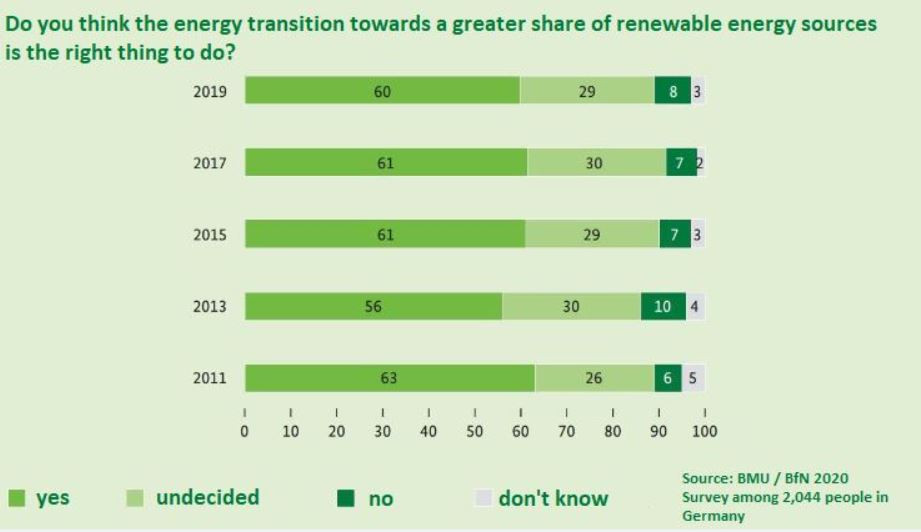