Falling emissions from the energy sector mean Germany’s overall greenhouse gas (GHG) emissions fell slightly in 2015, compared to 2014, according to revised data published by the Federal Environment Agency (UBA). 901.9 million tonnes CO₂ equivalents were emitted in 2015, 0.3 percent less than in 2014, and 27.9 percent less than in 1990. Preliminary data released by the UBA last year had shown a slight increase. “The Energiewende is beginning to have an effect,” said UBA president Maria Krautzberger now. “More and more power comes from sun, wind or water and not from coal or oil. That is reflected in falling emissions.” She called for a step-by-step coal exit. Emissions in the agriculture and transport sectors rose slightly. Only with the help of e-mobility could Germany hope to lower transport emissions, Krautzberger said. In a separate press release, Greenpeace energy expert Niklas Schinerl said, “The German climate target is little more than words. The delayed coal exit by the federal government and the car industry’s reticence are to blame.”First estimates for 2016 by AG Energiebilanzen (AGEB) recently showed a 0.9 percent rise in energy-related CO₂ emissions. 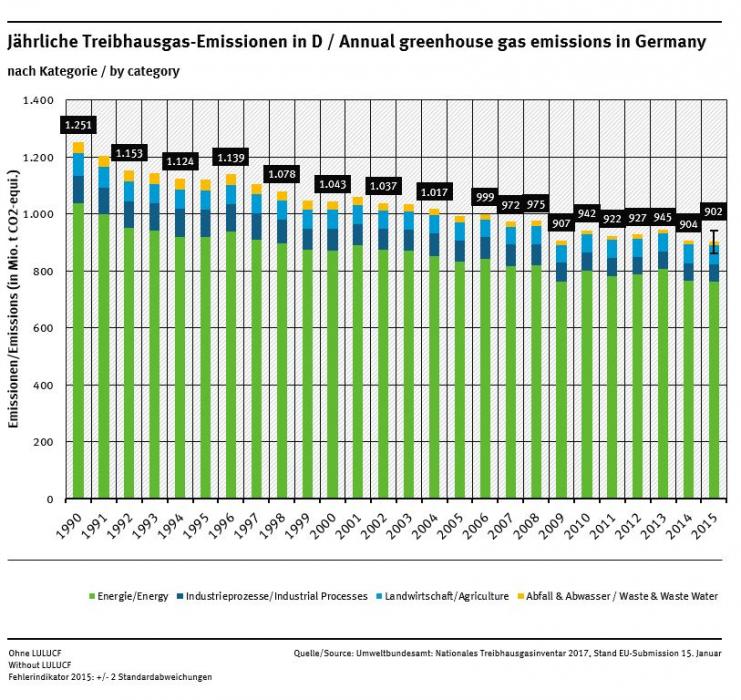 For background and 2016 estimates read the CLEW article German carbon emissions rise in 2016 despite coal use drop and the CLEW factsheet Germany’s greenhouse gas emissions and climate targets.