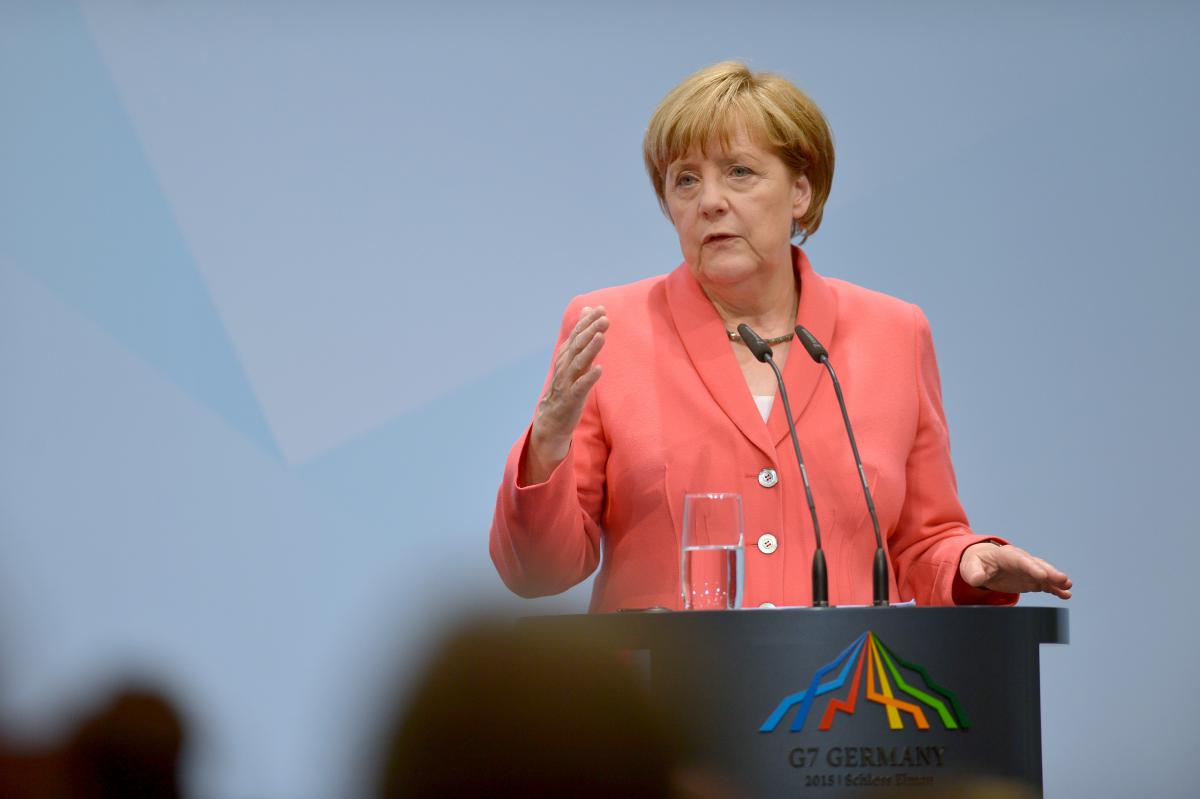 Communiqué wording "binding" tough to agree - Merkel speaking at the G7 final press conference. Photo: © Bundesregierung/Gottschalk
G7 leaders made a commitment to limit global warming to 2 degrees at their meeting in southern Germany. In order to achieve this goal, the group of seven industrialised countries said they would push for a decarbonisation of the global economy in the course of this century. German Chancellor Angela Merkel put the climate issue high on the meeting's agenda. Following are comments relating to climate and energy issues from her media conference after the summit.

"We have clearly acknowledged that we need binding rules at the core of the (Paris) agreement. Today, the world does not have binding rules, therefore this must be the goal."

"We want to ensure that all countries are positioned to enter a path of development that the rise of the global average temperature can be contained below 2 degrees, so a clear commitment to the 2-degree goal."

"We know that we need very deep cuts in global greenhouse gas emissions."

"We acknowledge that we need to decarbonise the global economy in the course of this century."

"The G7 countries will commit to individual reduction targets. And we commit to the target to provide from 2020 onwards 100 billion dollars every year. It is important that we can demonstrate this before the conference in Paris, because many developing countries will only go to Paris with the goal of reaching an agreement if we commit to the financing objective."

Asked about the negotiations:

"Germany has re-emphasised that it wants to achieve its own goals (by 2020). We will discuss in the government in the coming days how we are going to do that. The economy minister is still in talks. There will be further talks this week. Then we will achieve a good solution that also includes all other questions related to energy.”

"There are a few countries that will remain committed to the use of nuclear energy. We have not made any specifications requiring anyone to exit nuclear energy. That is a German decision, which is respected, but the countries have different views."

"The G7 countries alone cannot achieve the climate targets, emerging nations such as China have to contribute."
"China has made clear with regards to the conference in Paris that for the first time it is looking into the question that CO2 emmissions will have to decline in China, too, after a phase of rising. That China is saying: 'There will be the day when we too will have to change our economy so less CO2 will be emitted', is a groundbreaking step."

Key elements from the text on climate and energy issues from the communiqué:

"Urgent and concrete action is needed to address climate change, as set out in the IPCC’s Fifth Assessment Report. We affirm our strong determination to adopt at the Climate Change Conference in December in Paris this year (COP21) a protocol, another legal instrument or an agreed outcome with legal force under the United Nations Framework Convention on Climate Change (UNFCCC) applicable to all parties that is ambitious, robust, inclusive and reflects evolving national circumstances.

"The agreement should enhance transparency and accountability including through binding rules at its core to track progress towards achieving targets, which should promote increased ambition over time. This should enable all countries to follow a low-carbon and resilient development pathway in line with the global goal to hold the increase in global average temperature below 2°C.  Mindful of this goal and considering the latest IPCC results, we emphasize that deep cuts in global greenhouse gas emissions are required with a decarbonisation of the global economy over the course of this century.

"Accordingly, as a common vision for a global goal of greenhouse gas emissions reductions we support sharing with all parties to the UNFCCC the upper end of the latest IPCC recommendation of 40 to 70 percent reductions by 2050 compared to 2010 recognizing that this challenge can only be met by a global response. We commit to doing our part to achieve a low-carbon global economy in the long-term including developing and deploying innovative technologies striving for a transformation of the energy sectors by 2050 and invite all countries to join us in this endeavor. To this end we also commit to develop long term national low-carbon strategies."

"We reaffirm our strong commitment to the Copenhagen Accord to mobilizing jointly USD 100 billion a year by 2020 from a wide variety of sources, both public and private in the context of meaningful mitigation actions and transparency on implementation."

"We will strengthen cooperation in the field of energy efficiency and launch a new cooperative effort on enhancing cybersecurity of the energy sector. And we will work together and with other interested countries to raise the overall coordination and transparency of clean energy research, development and demonstration, highlighting the importance of renewable energy and other low-carbon technologies."

Please note: Merkel spoke in German at the press conference - translations are not official.

Get in touch if you have any requests, questions or suggestions.
Sven Egenter