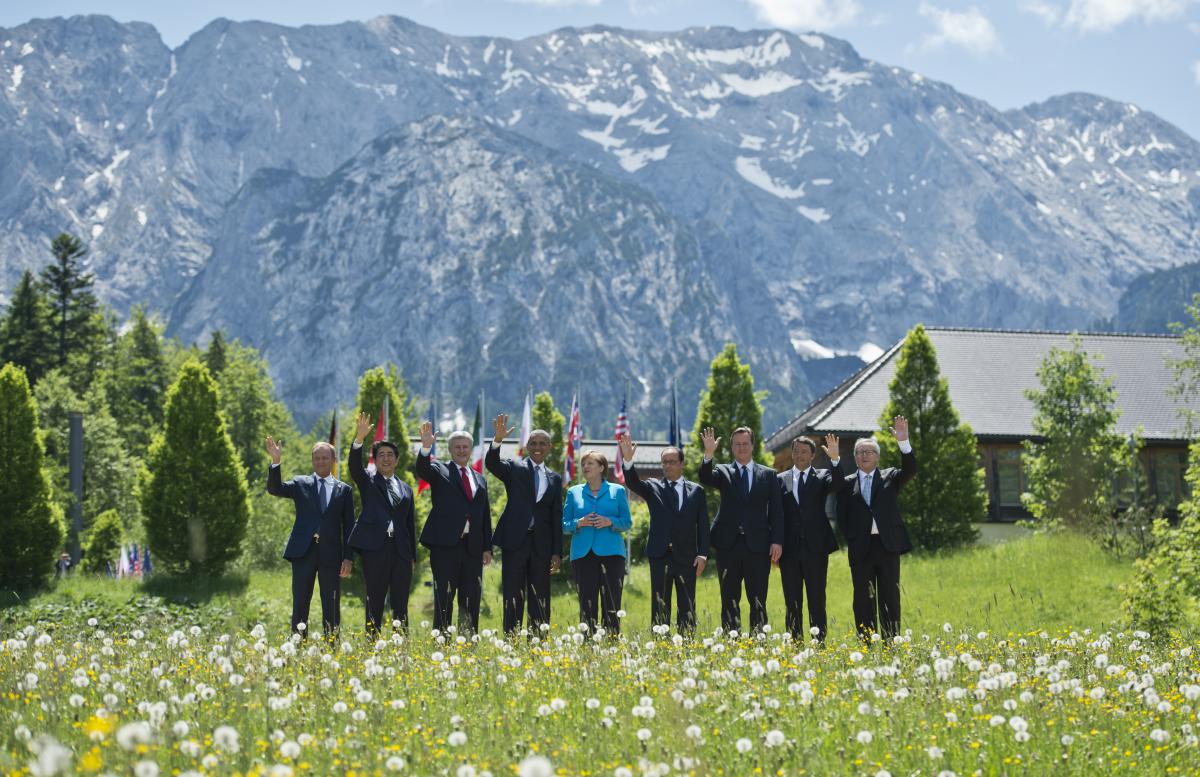 Read the "Leader's Declaration" of the G7 Summit in English here.

German NGO Germanwatch calls the G7 statement on climate a “surprisingly strong result.” “The G7 has put the end of the fossil era on the global agenda. This summit sends a strong signal for a successful climate agreement at the end of the year in Paris,” said policy director Christoph Bals in a statement. “All G7 nations are committed to an energy transition. Additionally, there will be support for the roll-out of renewable energies in developing countries. These are two very important results."
Bals told Clean Energy Wire the positive results were at least partly the result of Chancellor Anglea Merkel's commitment. "But the reality test will soon come in Germany. Merkel has to decide about a new mechanism to limit coal in Germany. We will see how she decides. If the use of electricity from coal is not pushed back considerably, the German climate target will not be achievable by 2020. The Chancellor finally has to show her true colours.”

“The G7 has made a step forward with regard to climate protection and have held out the prospect of the end of the age of fossil fuels. But national targets for cutting greenhouse gas emissions that the G7 states have so far presented for the UN climate conference in Paris highlight a sharp contrast to these pledges” – a press release form Oxfam Germany reads.

Environmental NGO Greenpeace called the results of the G7 meeting positive. “Elmau delivered,” said Greenpeace energy expert Tobias Münchmeyer, according to a report by news agency dpa. He said the vision of an energy transition towards 100 percent renewables was clearly taking shape. “With the agreements, the G7 has finally started the swan song for coal.” He demanded the door to false solutions like nuclear energy now also be closed.

Marijn Dekkers, president of the VCI says concrete steps towards reducing greenhouse gas emissions are lacking in the results of the G7 summit. He only sees little progress on the way to the Paris climate conference in December. Dekkers said: “Despite the pledge to widely decarbonise economies and energy production it remains to be seen whether other nations will follow the example of the G7. For that, important details are lacking on concrete commitments for cutting carbon emissions, such as those only the EU has so far put forth. In the run-up to the G7, Dekkers had argued for a global emissions trading scheme, the VCI press release says. “Even after the G7 summit, the EU is fighting globally rising CO2 emissions almost single-handedly by implementing ambitious rules. Emissions trading and European climate targets absolutely must be internationally compatible to avoid today’s one-sided burden on our export economy, which is distorting international competition.”

Chambers of Commerce and Industry (DIHK)

The German Chambers of Commerce and Industry commented on the outcome of the G7 summit on climate and energy: “The G7 summit sends the signal that binding agreements will be reached at the world climate conference in Paris in December. Even though the G7 is only responsible for one third of global greenhouse gas emissions, their proposal, as viewed by other main emitters (China, Russia and India) and developing nations, on limiting emissions could  prevent the failure of global climate protection. Regarding the CO2 reduction path and timeframe, the final communiqué of the G7 partners shows that the respective governments’ views are quite far apart. Considering this, there will be a need for a discussion on how Germany can achieve its climate targets without production moving abroad.
We support the agreement among industrial countries to work more closely together to secure energy supply. Even though Germany has embarked on the transformation to renewable energy sources, we will for a long time stay dependent on natural gas, oil and coal from abroad. Reducing this dependency through close cooperation within the G7 is therefore a very important project for Germany.”