China’s PV exports and the impact in South Asia: A cross-border reporting collaboration 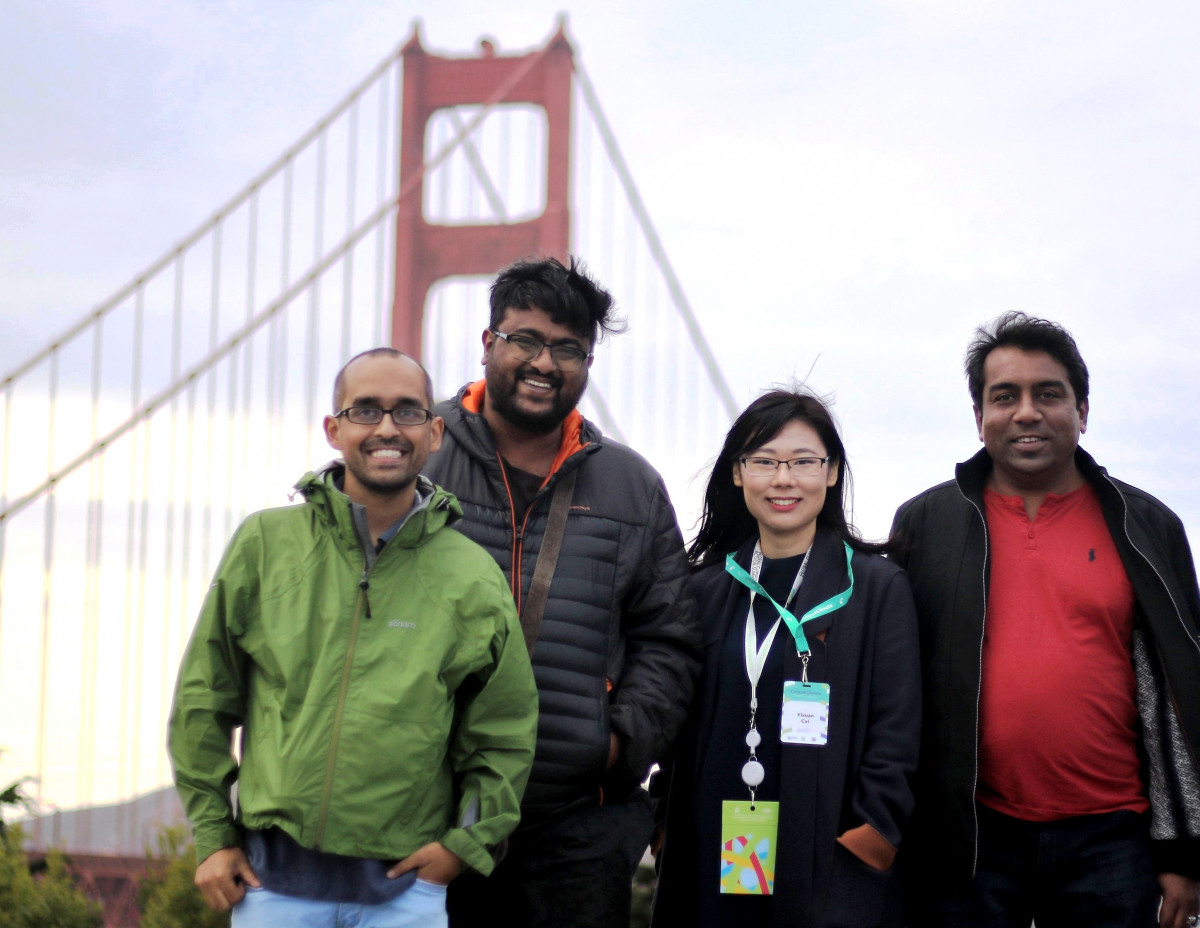 The team: Abhaya Raj Joshi, Karthikeyan Hemalatha, Catherine Cai and Amar Guriro. Photo credits: Abhaya Raj Joshi
How do China's PV exports impact South Asian countries? This question was the starting point for team PANIC, made up of four reporters from Pakistan, Nepal, India and China. They were among CLEW's finalists for the 2019 'Go Collaborate – Energy Transition Story Grant.' The team used this grant to set up a cross-border reporting collaboration.Read more about their findings and insights below.

What was your biggest challenge working on this project?

Abhaya: The biggest challenge was to choose a time where everyone could come online at the same time to discuss the project. Communicating with the team member in China, Catherine, was not as easy as messaging platforms don’t work there.

Karthikeyan: Understanding how politics affects international trade was quite complicated and challenging. The general understanding is that India has done exceptionally well in meeting its NDCs by improving its solar capacity. While this is true, it is not the full picture. Finding resources challenging that narrative was difficult.

"The general understanding is that India has done exceptionally well in meeting its NDCs by improving its solar capacity. While this is true, it is not the full picture. Finding resources challenging that narrative was difficult."

Catherine: Getting quotes from several stakeholders was tricky. At first, I planned to illustrate the achievements and difficulties that solar companies met in both domestic and overseas markets by telling the story of Jinko, the largest solar company in China, or of Zonery, an engineering, procurement and construction (EPC) company, which runs solar stations in Pakistan. By negotiating with their management head and their PR teams, my interview requests to Jinko and Zonery were pending for two months and finally got rejected. They were reluctant to take interviews and gave excuses such as they are in the process of listing, which is a sensitive moment to make any comments. Zonary rejected when finding out it was a cross-border project.

The poor network was another issue. For technical reasons, the Virtual Private Network (VPN) I used failed for several weeks when we were doing the project. So I could not contact my team members through our WhatsApp group, Facebook, Gmail etc. When it finally got fixed, I could only access the VPN on my PC but not via phone, so there were always delays in messages.

How did you overcome this?

Abhaya: We overcame it by organising meetings with whoever was available and assigned someone to brief the members who could not make it to the meeting.

Amar: I visited a remote village and profiled a lady about how the solar panel that she purchased by selling her goat had changed her life. For the data, I talked to so many departments and finally got the data from a Photovoltaics (PV) dealers association.

Karthikeyan: I spoke to at least 20 sources, read extensively on the different policies India had implemented that could deter its expansion plans. Through conversations with each other, we put together the larger picture.

This also helped me frame my interviews and ask the right questions.

Catherine: I asked three other solar giants including Yingli, Longi, and JA Solar while waiting for comments from Jinko and Zonery. At the same time, I went to Hangzhou and Beijing to interview other stakeholders such as the Ministry of Commerce, China’s solar Photovoltaic Industry Association, banks, SinoSure, NGOs, research centers, lawyers, etc. and gathered plenty of information to illustrate the achievements and difficulties that solar companies faced in both the domestic and overseas market after the ‘531 Policy’, by which the Chinese government announced subsidy reductions for photovoltaic power generation. And why solar projects seem to be a small part of the whole Belt and Road Initiative map.

In order to solve the technical network problems, I asked my team members to get a WeChat account so that we could make group chat and phone calls.

How did working in a cross-border collaboration deepen your understanding of your subject?

Abhaya: Before working on the collaboration, we had reported on various facets of the issue with only one perspective in mind. We did not know the bigger picture of our story and how global forces were at play there. But after working on the story, we got to know how global policies and events shape local events.

Karthikeyan: I was surprised to learn how Indian solar panel manufacturers are years behind China. Not just in government policies to promote renewable energy, but also in R&D and investments. Indian solar growth was largely supported by imported panels.

Catherine: In China, the media mainly report the perspective of Chinese actors while sidelining the voices of local communities in countries where Belt and Road projects are developing. Media outlets outside China also tend to approach the topic with their own firmly held world views, often without engaging with Chinese stakeholders, so it is a valuable opportunity for us to work together and get all stakeholders on board.

"Media outlets outside China also tend to approach the topic with their own firmly held world views, often without engaging with Chinese stakeholders, so it is a valuable opportunity for us to work together and get all stakeholders on board."

Some media reinforced the false rumor that China enters coal-fired power plants to developing countries in their Belt and Road projects while simultaneously restricting new coal investments domestically - but that is not the case. According to data from Greenpeace, Chinese investors’ ratio of coal to solar is now the same at home and abroad — both are still six-to-one coal. Solar now presents a serious rebuttal to any pattern of Chinese overseas pro-coal bias. Since 2014, Chinese equity investment has supported a total of 12,622 megawatts of wind and solar PV projects combined along the Belt and Road. Before 2014, only 454.8 megawatts of solar PV and not a single watt of wind had gone online through such equity investments.

In the story alone, I realised energy poverty and electricity accessibility are tough issues in some places, including China and the other three economies when we were doing this project. But solar power could be an economically sustainable solution to solve both poverty and accessibility problems in terms of its cheap marginal price and its clean power attributes. The effects of Chinese solar product exports to the three South Asian countries prove that this solar power model is economically and environmentally effective to solve the energy poverty and electricity accessibility problems in these countries.

Amar: It was really surprising for me that all of our major neighbouring countries of South Asia are so connected and at state level all of our nations are somehow connected to each other. But media outlets do not consider this relationship. It was a great learning experience.

Was it difficult to get your editor on board for this collaborative cross-border project?

Abhaya: It wasn’t difficult. My editor encouraged me to do more such stories.

Karthikeyan: No, it wasn’t difficult.

Catherine: Not at all, my editor is very supportive of this project to let me go ahead.

Amar: No, she was so helpful.

How did you coordinate the work of four busy journalists based across different countries in South Asia?

Abhaya: We used messaging apps, as calling from one country to the other is not easy. We used Google docs to share drafts.

Karthikeyan: We set up an online meeting at least once a month to ensure everyone was on the same page and report on what we had worked on.

Catherine: We arranged meeting times on social network platforms and tried to make it work for everyone. When it didn’t fit for everyone, Abhaya would be the coordinator who would talk to each of us.

What's your one piece of advice for a team of journalists keen to do a joint cross-border story for the first time?

Abhaya: My advice would be to choose a project leader and to get all members to commit a certain portion of their time towards completing the story.

Karthikeyan: Cross-border stories require a lot – much more than the usual stories we do – of time and effort. The key is to start early and use fellow reporters to broaden your understanding of the issue.

Amar: First know the subject you are going to work on and your team members, and establish your understanding of the dynamics of cross-border issues. Then write the story in simple way for your reader or viewers. Using data in cross-border journalism is good, but try to include human interest in the story as well.

Individual stories by the team members

Villages in Sindh light up with solar power

By Amar Guriro for Geo News

By Karthikeyan Hemalatha for Mongabay